U.S. Navy may stop docking in Haifa after Chinese take over port 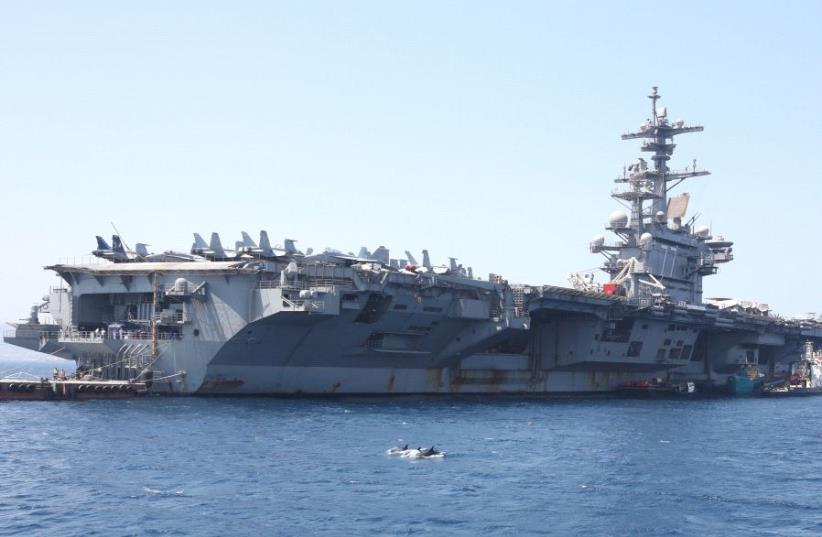 The USS George H.W. Bush docked in northern Israel's Haifa Port, July 3, 2017
(photo credit: MARC ISRAEL SELLEM/THE JERUSALEM POST)
Advertisement
WASHINGTON – The US Navy has acknowledged that its longstanding operations in Haifa may change once a Chinese firm takes over the civilian port in 2021, prompting Israel’s national security cabinet to revisit the arrangement, The Jerusalem Post has learned.
Haifa, the nation’s largest port city, regularly hosts joint US-Israeli naval drills and visits from American vessels. But a 2015 agreement between Israel’s Transportation Ministry and Shanghai International Port Group (SIPG) – a company in which the Chinese government has a majority stake – has raised intelligence and security concerns that are only now prompting an interagency review.
That agreement granted SIPG control over the port for 25 years. The Chinese company has committed $2 billion to the project and, according to state-run media, plans to transform the port’s bay terminal into the largest harbor in the country.
A representative of the Sixth Fleet said the navy’s partnership with Israel remains “steadfast.”
“Our US Navy ships frequently visit Haifa, Israel, for both US-Israel bilateral military activity and port calls,” Commander Kyle Raines told the Post, when asked whether China’s coming presence might affect fleet operations in the Mediterranean city.
“For now, there are no changes to our operations in Israel,” the commander continued. “I can’t speculate on what might or might not occur in 2021.”
Three sources familiar with the matter said that due to concerns that US defense officials privately shared with their Israeli counterparts, the Israeli government has launched “a review of the agreement at a high level,” specifically among members of the inner cabinet.
According to one source, several members expressed worry that sensitive infrastructure matters have not been properly vetted by Israel’s full national security cabinet prior to approval.
“You don’t want a decision that was made ostensibly for business reasons to have an impact on Israel’s relationship with the American navy,” the source said.
The deal was signed off by Israel Katz, who was serving as transportation minister at the time and has remained in the position since. He occupies a seat in the national security cabinet.
A senior IDF officer confirmed that the review is under way. But it is unclear whether Israel has any recourse to allay US concerns with the China project, which is already sealed and in motion.
“Historically, it’s interesting to see [that] the whole awakening is now when the contract was signed in 2015 – it begs the question what the hype is all about. It’s probably more conducive now because of the US-China tensions over trade, national security and the like,” said Assaf Orion, a retired Israeli brigadier-general and expert on Israel-China relations now based at the Washington Institute for Near East Policy. “There is always a question of encouraging investment versus managing risk.”
“The bottom line here is that Israel will make a fatal mistake by doing either or both of the following: disregarding China’s potential to advance Israel’s economy, and doing it with our eyes shut,” Orion continued. “We must keep our eyes open, fully aware of the risk management requirements and its possible impact on the US-Israel relationship.”
Retired Israeli and American defense and intelligence officials raised concerns throughout the summer that Chinese management of the port might jeopardize America’s operations there.
The former head of Israel’s Mossad, Efraim Halevy, sounded an alarm in recent months over the security implications of China’s creeping presence across Israel’s critical infrastructure. And retired admiral Gary Roughead, ex-chief of US naval operations, warned that a Chinese-run seaport in the bay could force the navy to dock its warships elsewhere.
“The Chinese port operators will be able to monitor closely US ship movements, be aware of maintenance activity and could have access to equipment moving to and from repair sites and interact freely with our crews over protracted periods,” Roughead remarked during a conference last month at the University of Haifa.
“Significantly, the information systems and new infrastructure integral to the ports and the likelihood of information and electronic surveillance systems jeopardize US information and cybersecurity,” he added.
Israel has its own security concerns in Haifa to consider as well. The seaport in question is not far from an Israeli navy base where the country maintains its fleet of submarines, which foreign press has reported are capable of carrying and launching nuclear missiles. Domestic critics say that China’s shipping operations in close proximity to the fleet amount to an unacceptable security risk.
This would not be the first time that the Sixth Fleet altered its operations in Haifa due to security concerns. In the aftermath of the USS Cole bombing in Yemen in 2000, and during the Second Intifada, the frequency of port calls fell dramatically and USO Haifa was permanently shuttered.
But neither of those events were within Israeli government control.
The Prime Minister’s Office, Transportation Ministry and Foreign Ministry declined requests for comment on this report.
Herb Keinon contributed to this report.