Participants in the ceremony talk about their personal connection to the Holocaust and read names of murdered relatives. 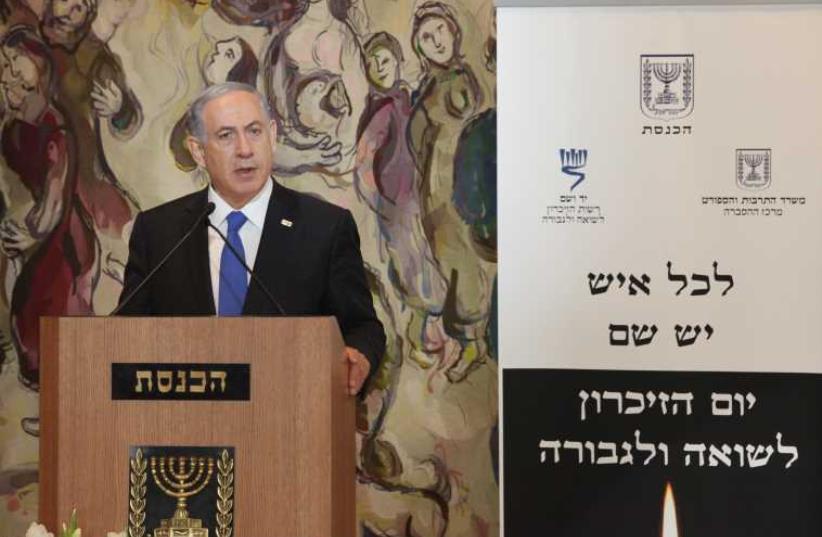 Prime Minister Benjamin Netanyahu delivers address at Every Man Has a Name ceremony on Holocaust Remebrance Day
(photo credit: COURTESY KNESSET SPEAKER'S OFFICE)
Advertisement
"Every Man Has a Name," the IDF Rabbinical Choir sang Thursday, opening the Knesset's 26th annual Holocaust Remembrance Day ceremony named after a poem by Zelda (1914-1984) that was inspired by the Holocaust.The ceremony in the Knesset's Chagall Hall began with the lighting of six candles in memory of the six million Jews murdered. Two were lit by survivors Masha Wolfstahl and Baruch Vind, along with their grandchildren. MK Michal Biran (Zionist Union) lit a candle with her grandfather Haim Kurtzky, who survived three concentration camps and wrote a book about his experiences. Chaya Mazuz and Idan Mazuz, new Likud MK Yaron Mazuz's mother and son, lit the fourth candle. Chaya survived the Holocaust as a child in Gabes, Tunisia, from which many Jews were sent to Auschwitz. MK Rachel Azaria (Kulanu) and her mother Sharon lit a candle in honor of her grandfather, who escaped Germany and helped some of his relatives do so, as well. Zionist Union MK Hilik Bar lit a candle with his mother, Tovah Abukrat, whose father was a partisan in Poland.Following the candle-lighting, Ashkenazi Chief Rabbi David Lau read Psalms, Sephardic Chief Rabbi Yaakov Yosef said Kaddish and IDF Cantor Shai Abramson chanted the "El Maleh Rachamim" prayer.Knesset Speaker Yuli Edelstein began the reading of names of those who were killed in the Holocaust, saying "this is an important memorial that tries to give faces and names to the incomprehensible dimensions of the Holocaust."Edelstein said his mother and grandparents survived in a ghetto in Transnistria and listed their relatives who perished.President Reuven Rivlin, whose family came to Israel in the early 19th century, broke his tradition of reading names of his wife Nechama's relatives, as she participated in the ceremony for the first time on Thursday. Instead, he read names of relatives of former Mossad chief Meir Dagan and of sculptor Danny Karavan, who designed the walls of the Knesset's plenum.Prime Minister Benjamin Netanyahu read a poem about the Holocaust by his father-in-law, Shmuel Ben-Artzi, who was in Israel at the time, but whose relatives perished.Economy Minister Naftali Bennett told the story of his wife Gilat's grandfather who pretended to be a Polish farmer and managed to hide some of his family.MKs Yitzhak Cohen (Shas) and Eli Alalouf (Kulanu) read names of relatives who perished in North Africa - Cohen's were from Libya and Tunisia, Alalouf's from Morocco."The Nazis did not reach Morocco, but their partners from Vichy France implemented racial laws and put my family in a ghetto in Fez," Alalouf explained.The only non-Jewish MK to participate in the ceremony was Ayoub Kara of Likud, who said his adoptive parents, with whom he lived as a teenager, were Holocaust survivors, and listed their relatives' names.Holocaust survivor and poet Yaakov Barzilay closed the ceremony by reading a short story he wrote about children who wanted to go on a train for their birthday, and years later got their wish, but on trains leading to concentration camps.