What is Chuck Norris doing in Israel?

Former Foreign Ministry director Dore Gold posted a photo of himself alongside the actor and martial artist at a restaurant in Herzliya on Saturday. 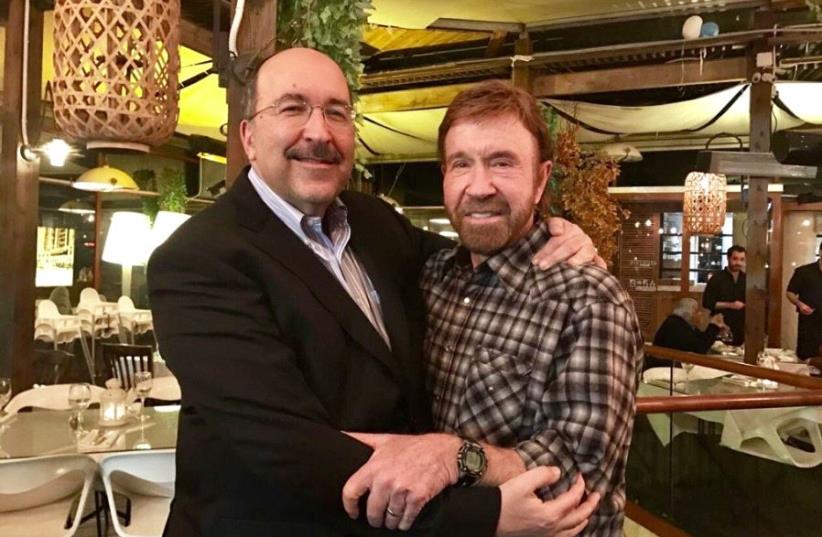 Former Foreign Ministry director-general Dore Gold (L) and actor Chuck Norris in Herzliya, February 4, 2017
(photo credit: TWITTER)
Advertisement
Chuck Norris is so tough, he’s taken on the Middle East.Well, perhaps.The actor and martial artist who spurred an Internet craze of pop culture satirical factoids about his persona was in Israel this weekend.Former Foreign Ministry director-general Dore Gold posted a photograph of himself alongside the Walker, Texas Ranger star at a restaurant in Herzliya on Saturday.

A break from Middle East tensions. Dinner in #Herzliya with @ChuckNorris. pic.twitter.com/C62z0SRuBf

While Gold stated that the encounter served as a “break from Middle East tensions,” it was not clear for what purpose and how long Norris was in the Holy Land.Norris was seen visiting Jerusalem on Sunday. His tour of the Holy City included a visit to the Western Wall tunnel. He was also seen at the Wall itself.Norris has in the past highlighted that he has filmed three movies in Israel, including the 1986-action thriller Delta Force, directed by Israeli filmmaker Menachem Golan. He has also voiced his support for Prime Minister Benjamin Netanyahu and endorsed him in both of the country’s last two elections.