Lizerbram is very committed to sharing and telling Positively Israel stories and the many programs JNF-USA offers that engage people who are not Jewish or had no prior connection to Israel. 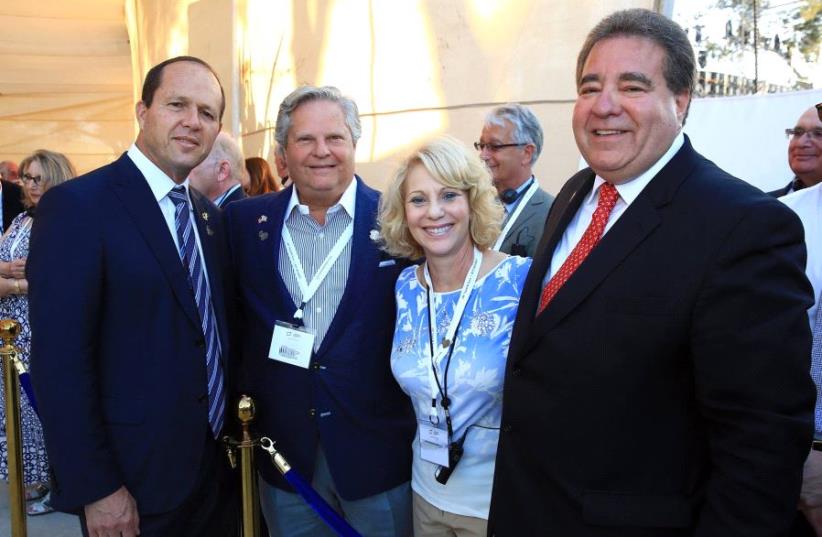 Ahead of the festive Jerusalem Day ceremony on Ammunition Hill, the city's mayor, Nir Barkat, poses with incoming JNF-USA President Dr. Sol Lizerbram, San Diego Regional President Lauren Lizerbram, and JNF-USA CEO Russell F. Robinson on Wednesday
(photo credit: MENACHEM LANDOW)
Advertisement
Dr. SoL Lizerbram, a longtime family physician who is due to begin his term as Jewish National Fund-USA’s national president in October, has fond memories of his early introduction to the environmental non-profit organization.“I knew about JNF as a little boy when we used to put money in my bubbe’s Blue Box on a Friday evening before lighting candles, and from Hebrew school, where we had to fill up cards to be given tree certificates.”But it was only after he and his wife, Lauren, moved from Philadelphia to California in 1978 that he really became involved.“I became friendly with a prominent Jewish personality named Larry Lawrence, who owned the well-known city landmark called the Hotel del Coronado,” Lizerbram recalls in a telephone interview from his home in San Diego. “He introduced me to some people doing good work for the Jewish National Fund. In the beginning, I didn’t know much about it, but started getting engaged on a local basis and eventually, over time, became president of the local board in San Diego, then joined the national board, and became more and more involved.