The road past Mosul

As forces gather to take on Islamic State in its Iraqi stronghold, the battle is likely to be merely a chapter in the wider story of conflict in the country. 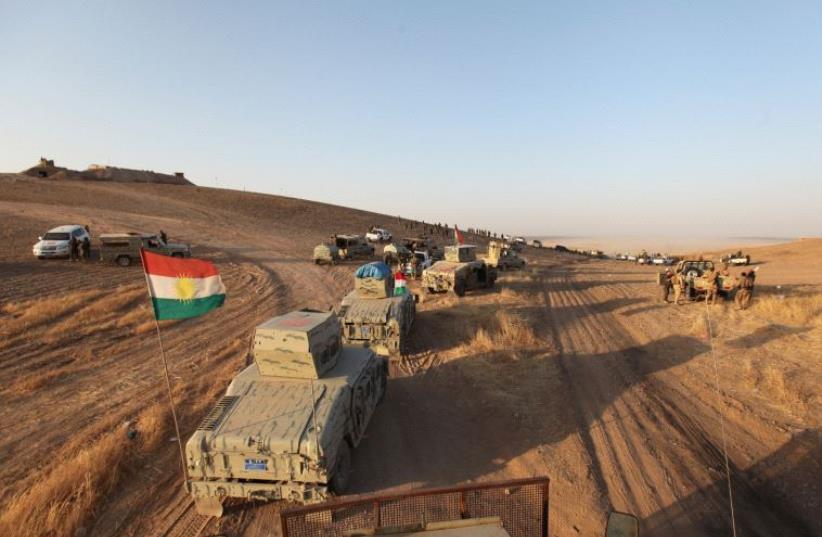 Kurdish Peshmerga forces are seen southeast of Mosul, August 14
(photo credit: REUTERS)
Advertisement
NINEVEH PROVINCE, IRAQ -- Black smoke was rising from the Qayara oil fields as the refugees huddled in the shade. They had arrived that morning – from IS-controlled territory a little further west.The refugees had come from Jahala village.They were Sunni Arabs who had elected earlier that day to risk an escape from IS territory across the desert – a route ending in certain death if caught by the jihadists.
Read More...
“IS has set fire to the oil fields,” one of them told us. “The smoke makes it impossible to breathe. Twelve or so people every day need a hospital. It’s impossible to stay.”So they had set out in the early dawn, just after first light – a convoy of men, women and children. “The best time is before the sun rises, when IS fighters are sleeping. We used that time to come over.”Now they were exhausted, grimy, but safe. The Peshmerga fighters of General Mala Mahdi were quizzing the men, looking for any indications that they might be IS members sent to infiltrate the lines. It appeared that all was well, however. After a while trucks arrived and the families began to load their belongings. Their destination was one of the large refugee camps established by the government of Iraq. There would be little by way of comfort there. But there would be shelter, food, water – and a chance to breathe air not polluted by the black smoke of burning oil.The act of firing the Qayara oil fields in an area under their own control exemplifies the florid insanity with which the name Islamic State is associated. It provided no substantive benefit to the jihadists themselves, and with a stroke rendered the lives of the civilians in the area unlivable. The result was that Sunni Arabs, like the refugees from Jahala, were forced to seek sanctuary with the Kurdish Peshmerga. The Sunni Arabs, of course, are the very people in whose name IS wages its jihad. Eighty miles south of Mosul, witnessing scenes like this, the issues surrounding the current war between Islamic State and its enemies can seem fairly stark and simple. But the seeming simplicity is deceptive.The insanity of Islamic State and the imperative that it be destroyed are indeed fairly unambiguous matters. The reduction of the area of its control, meanwhile, is already an advanced process. The jihadists have lost 50 percent of their holdings in Iraq, and around 25 percent in Syria. Mosul is the next looming target for the enemies of IS.It promises to be a fiercely contested fight.The result, eventually and inevitably, must surely be the defeat of the jihadists. After which, perhaps, the air around Jahala will clear and its unfortunate residents may return home.Unambiguity, however, ends when one considers the state of affairs among the various forces seeking to carry out the task of defeating IS. Here, one finds clashing agendas, different and rival traditions, and the almost certain prospect that the defeat of IS will ultimately constitute only an episode in the wider story of conflict in Iraq.“I don’t believe in Shi’ite and Sunni, Kurd and Turkmen. We are all citizens,” said Maj.-Gen. Najim al-Jabouri, as we sat in his office at an army base south of Mosul.Jabouri is the commander of Nineveh operations for the Iraqi army and the officer commanding the Mosul operation. 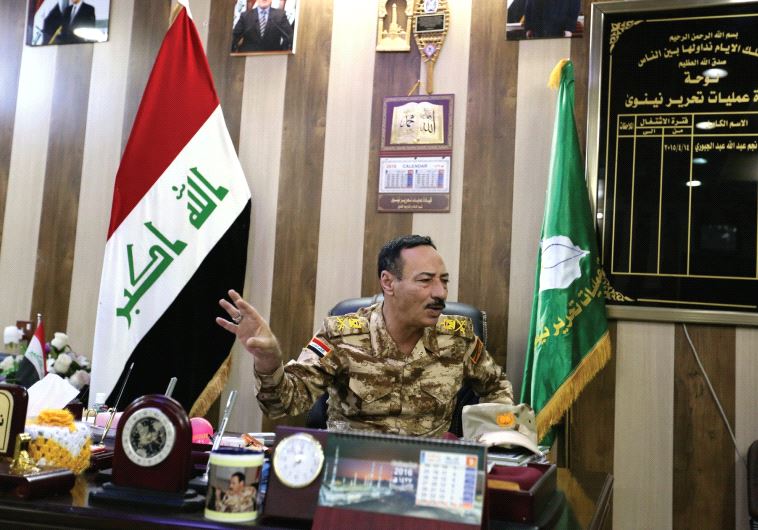 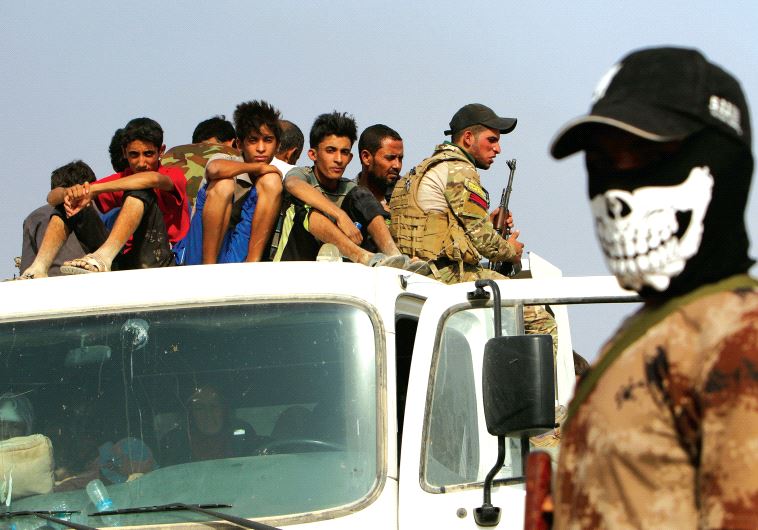 Displaced Sunnis wait near Qaraya for Iraqi forces to transport them to safety after escaping from Islamic Statecontrolled villages in the Mosul region (photo credit: REUTERS)TURKISH INFANTRY officers, a lot younger and fitter looking than the superannuated Saddam-era veterans, are overseeing the training of the Hashd al-Watani volunteers at the base at Bashiqa.The Hashd al-Watani is the brainchild of Atheel al-Nujaifi, former governor of Nineveh Province, who is strongly linked to Turkey.Nujaifi, whom I interviewed in Erbil, sees his force as an element in the construction of a federalized, decentralized northern Iraq, divided into Sunni, Shi’ite and Kurdish areas. There will be “greater Turkish involvement,” he predicted, if no solution is found to the needs of Iraq’s Sunnis.Nujaifi has been criticized in the past for statements apparently taking a lenient view of the nature of IS rule in Mosul. He dismissed these criticisms, but it is clear that his main focus is what he sees as the intention of the government in Baghdad to create a sectarian Shi’ite government, and what this would mean for the country’s Sunni- Arab minority.Like Bahram Yassin, Nujaifi sees the future of Mosul as part of a larger struggle to resist Iranian encroachment in the region.The Iranians, according to Nujaifi, wish to make use of Iraq’s Shi’ite militias to achieve this goal. “Iran wants to use Mosul to build a corridor to Syria,” he told me, “and to dominate the region.” The Iranian intention, he suggested, is to “build a revolutionary army” through the Shi’ite militias (an identical point was made to me a year ago in Baghdad by an officer of the Badr Organization, one of the main Iran-supported militias in Iraq).As for Iraq’s future, if the attempts at federalism fail, and “if the Kurds split and become independent, then Iraq itself will split. The Sunnis cannot go back to the situation before 2014. But we hope this can be avoided.”So both the commanders of the Peshmerga and their junior partners in Hashd al-Watani see the Iraqi government and, in particular, the Shi’ite militias aligned with it as no less a danger to their respective community’s aspirations as are the now retreating Sunni jihadists of the Islamic State.Where is all this heading? The offensive appears to be approaching. There are reports of heavy military traffic on the Erbil-Mosul road. Leaflets have been dropped by coalition aircraft over the city, informing its inhabitants that the liberation of the city is imminent and urging them to leave so as not to be used by IS as human shields during the battle. The refugees are continuing to stream in from IS-controlled areas.From the frontline positions of General Bahram Yassin’s Peshmerga in Bashiqa, Mosul can be clearly seen. Only 12 kilometers separate the Kurdish forces from Mosul’s city center, their final objective in any assault. On most days now, the frontlines are quiet, just the occasional mortar fire or the crump of heavier ordnance from further off. The fighters spend their days cleaning their weapons, keeping fit, and waiting for the order to move forward.Much fighting and dying remains to be done in and around Mosul before Islamic State is finally destroyed. The gravity and urgency of this task should not in any way be underestimated. The refugees from Jahala are of the same flesh and blood as all of us, and this is salient.But as is becoming increasingly clear, the eventual defeat of Islamic State is looking increasingly inevitable. And even now, before the victory, the various forces in the “coalition” assembled to destroy IS are already looking beyond the city, toward the political, and perhaps also the military struggles which will follow its conquest. The Kurdish Peshmerga on the ridges above the city are thinking about independence, the Sunni militiamen under their tutelage also see little future for themselves in a united Iraq, the Shi’ite militiamen are serving the cause of the larger, Iranled regional alliance of which they are a part.The PKK are seeking to advance their own, rival Kurdish nationalist project. The road beyond Mosul promises to be a treacherous, complicated path, strewn with land mines.
Advertisement
PREMIUM Log Out
Subscribe for our daily newsletter