Tucked inside inconspicuous apartments you can find, with the help of your guide, the most fascinating synagogues.

By MOLLY GELLERT
JUNE 26, 2013 15:14
One of Budapest's hidden temples 370
(photo credit: Molly Gellert)
Advertisement
You won’t find them unless you’re with someone in the know. You’ll walk right past them assuming they’re just another of the many apartment buildings. Yet tucked inside these inconspicuous apartments you can find, with the help of your guide, the most fascinating synagogues: Budapest’s hidden temples.

Dozens of prayer houses existed within apartment buildings in the beginning of the twentieth century. Close to commerce, they were easily accessible for the thriving Jewish community to transition from studying Torah to conducting business. The founders of these discreet places of worship therefore intended for them to be convenient, not hidden.

The impact of two world wars and the anti-religious nature of the socialist regime in Hungary made these prayer houses difficult to maintain. Soon they began to close down, causing one to merge into another, leaving the few remaining hidden temples of today. I stumbled upon one of these surviving synagogues almost by chance. My Israeli-American shomer Shabbat (observant of Shabbat) buddy and I decided to try a new synagogue for Saturday morning services. We met in front of a McDonald’s at a busy intersection of the city. With neither of us carrying a cell phone on the day of rest, it made for a good landmark. We walked away from the brand names and chain stores of the city center into what felt like a more rough-and-tumble neighborhood. I looked around at the people we passed and felt a bit out of place, as if I were in the minority for being sober and having all my teeth still intact.

“It’s over there somewhere” said Oriel, my Shabbos buddy. He was pointing to Teleki Ter, a large city square filled with overgrown grass and scattered wooden benches. Teleki Ter is also home of the Teleki Ter shtiebel, one of the last remaining hidden temples.

“It has to be around here somewhere” he continued, pacing up and down a street along the square past a row of 100 year old apartment buildings. “I think this is it, #22” but the door from the outside was locked and entrance accessible by key or a digital keypad. We waited there unsure of what to do next when an old man approached, put out his cigarette and punched some numbers into the keypad. Seconds later another man opened the door and quickly disarmed the beeping of the keypad. They entered the apartment building and Oriel and I scooted in after them. 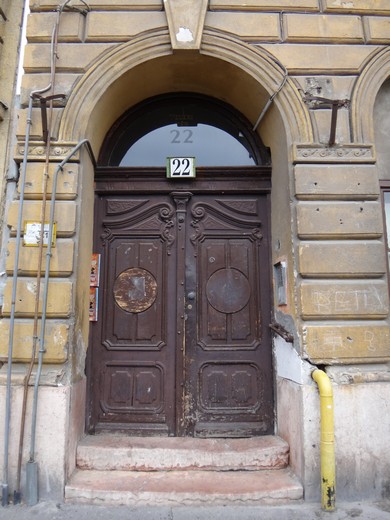 #22 Teleki Ter is a typical Budapest apartment building. This means it’s only about four floors high and each individual flat opens to a main courtyard in the center. Although Oriel and I had made it past the main entrance, we had no idea which apartment door led to the synagogue. One door stood out from the rest. It was bright white and modern and therefore must have been the prayer house, or so we thought. Oriel and I drew verbal straws as to which one of us would enter through the white door first. I lost and slowly opened the door, peering my head around to see inside.“Can I help you with something?” asked a man standing behind me. I turned around to see it was the man who had turned off the main keypad to the building. He and the older man had been watching the scene all along. I quietly shut what was open of the white door, as if guilty of something, and stuttered in response: “I um you see we uh…”“Are you looking for the shul?”“Yes!” I said with a sigh, my right hand probably over my heart with relief. “It’s this one here” he said opening a dark brown door that blended in with all the other doors. Of course it blended in with the others. Why would the door to a hidden temple stand out from the rest? With a sly smile he added, “Don’t worry, it happens all the time.” Walking through the correct door I felt like I had been time-warped back 100 years, in a good way. Its hard wood floors had gone soft with wear and Persian looking rugs had been scattered around as if to help soften the blow of our steps. A delicate white lace fabric hung separating the men and women’s sections and a small row of creaky wooden pews were in each area. Along the pews were prayer books dating from over 100 years ago. The walls had mixed matched frayed wall paper and plaques in Hebrew, some on parchment some on stone. I felt as if I had just stepped into someone’s home, and we were treated as such. 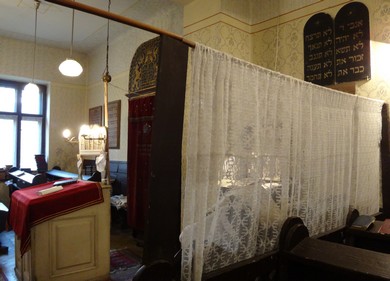 Interior of Teleki Ter Shtiebel maintains 100 year old essenceInterior of Teleki Ter Shtiebel maintains 100 year old essenceWe were greeted warmly and ushered into a more modern looking community room. In one corner there was a gigantic metal contraption for making traditional kosher palinka, a typical Hungarian brandy. Two pieces of paper were taped to the wall above it: one with names typed and a few handwritten, and the other totally blank.“Don’t you want to know why there’s a sheet on the wall that’s completely blank?” I turned around to see that the question came from a young boy. And so I indulged him: “Yes. Why?”“It’s to inspire future donors for the palinka maker.”A few weeks later I went back to the Teleki Ter Shtiebel, as it is called using the Yiddish word for small prayer house, to meet with Andras Mayer, the temple’s chairman.During our meeting Andras’s passion for the renewal of the Teleki Ter Shtiebel was evident as he buzzed around its interior proudly highlighting the changes the shul has undertaken in conjunction with efforts to keep its original essence alive. He showed me pictures of the renovated community room only a few years prior: completely run down. Now a place where community members can meet for festivals and meals, it was hard to imagine the room, originally used as the women’s prayer section, completely decrepit with the walls falling down. 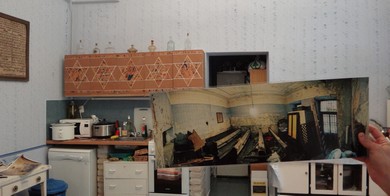 “There was a small refrigerator right here,” Andras explained jumping to a place against a wall and motioning with his hands where the appliance once was. “And I tried to move it but then the wall started to fall down. I pushed the fridge back in its place but I knew we had a problem.”I laughed and asked, “So besides making sure the walls don’t fall, how did you prioritize your other changes?”“Well I insisted on the palinka maker.”If I could raise one eyebrow, I would have. “Why was the palinka maker a priority?”“Well we had the fruit mash so we needed to use it to produce palinka.”“Why did you have the fruit mash?”“You see everything we do here we learn in the process. We start something and that’s how we learn. Take the water system. Do you know that we can make hot water here? You’re not supposed to make hot water on Shabbat because the cold and the hot water shouldn’t mix. Here let me show you.” And with that he was up and bouncing towards the bathroom, moving two different levers of the water boiler, one to be used on Shabbat and one for during the week. Despite these quirky technological advances this 100 year old apartment embedded prayer house has kept its character. The pews, for example, are practically mine traps as every other seat has potential for falling apart. Andras, however, showed me a trick, “You see these two wooden strips underneath?” he asked lifting up one of the pew seats, “these will give you stability so just lift the seat and check to make sure it has them before you sit down.” Good to know. The community in this tucked away shul has definitely experienced a revival in its membership. Still, there are some Sabbath mornings where they lack the minimum number of ten men, or a minyan, to hold services. In those rare moments they reach out to a few Jewish men who own shops in the area, or they borrow people from a larger neighboring synagogue, also hidden in an apartment building. Though the Teleki Ter synagogue has grander goals, their immediate aim is to maintain enough people for “a minyan plus one.”One of these grander goals includes a major research project to learn more about the history of the shtiebel. This has involved gathering documents, letters and photographs to provide information on the once vibrant Jewish community in the surrounding area before, during and after World War II. As part of this project, Andras and his team are tracking down people living on all sides of the globe, to gain valuable insights through interviews with individuals of different generations who are familiar with stories of the neighborhood. Today a few remaining synagogues still hide in apartment buildings around Budapest. But once you get past the unassuming exterior outside, the synagogues are modern and grand like any other traditional temple. Unlike the others, tiny Teleki has maintained its small prayer house feeling and thus represents, as Andras calls it, “the last shtiebel of Hungary.”

“That’s the brand” he adds with a smile. “Or ‘we are the little synagogue with a big plan.’”Molly Gellert is a Jewish World columnist based in New York, US. She earned her BA in Politics from Occidental College and MA in Government with a specialization in Diplomacy and Conflict Resolution from the Interdisciplinary Center in Herzliya. Previously, Molly served as a research assistant for the International Institute for Counter-Terrorism and as an intelligence analyst for the New Jersey Regional Operations Intelligence Center.Contact Molly at molly.gellert@gmail.com
Advertisement
Subscribe for our daily newsletter