A new biography of Yitzhak Rabin paints an intimate profile of the leader and his struggles. 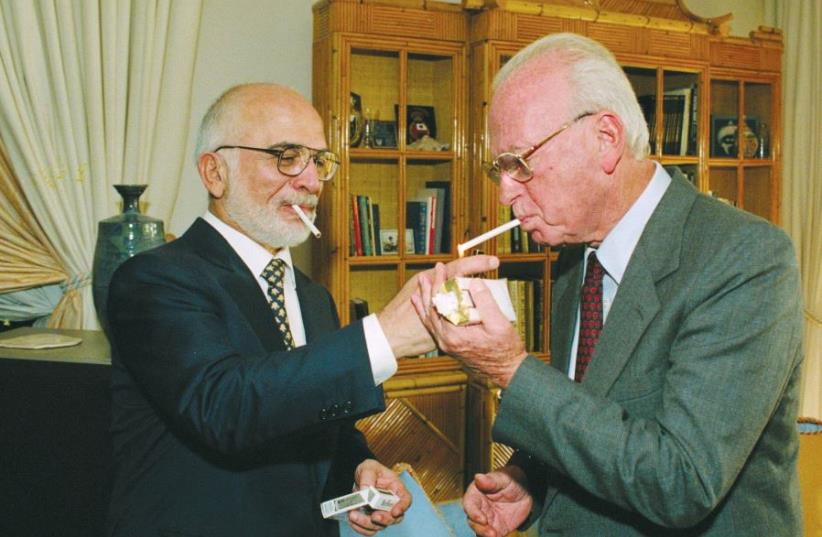 King Hussein of Jordan lights prime minister Yitzhak Rabin’s cigarette at the royal residence in Aqaba after signing a peace treaty
(photo credit: YAACOV SAAR/GPO)
Advertisement
On July 13, 1992, Yitzhak Rabin presented his government to the Knesset.“He was determined to put an end to what he saw as the mortgaging of Israel’s resources and future to the settlement project in the West Bank and Gaza,” writes Itamar Rabinovich in a new biography. Israel, the author continues, was being drained economically and its international position was being undermined.

Some 25 years later, the same argument could be made and is being made by Israel’s Left. John Kerry said as much in his speech bookending the Obama years. Israel’s current government isn’t listening.Should it be? Rabin was always a complex figure and his Janus-faced policies – on the one hand the tough soldier who allegedly encouraged the army to “break bones” during the first intifada and on the other hand the “man of peace” – loomed large in Israeli history. This feeds into competing narratives of history as well: that Rabin alone helped lead to peace and his murder destroyed the chance for peace, or that Palestinian intransigence is the real problem.Rabinovich, a professor at New York University, former ambassador to the US under Rabin and a chief negotiator with Syria, is well placed to unpack Rabin’s life. He sets out by arguing that “as consequential as Rabin’s assassination was, it is his life – his decisions and actions – not his death that defines his legacy.” Rabinovich argues that Israelis are still in need of a new Rabin, “a leader of the stature and qualities,” that can fix the country’s fundamental problems.Rabin was born in Jerusalem in 1922. It’s hard to imagine how interconnected the world he was born into was. His mother Rosa, a non-Zionist, nevertheless moved to Palestine in 1919 when the Soviet revolution was not to her liking. She knew Labor Zionist leader Berl Katznelson, and Moshe Shertok was her cousin. Zionism was very much a family business in those days, even for non-Zionists. Rabin was nurtured in these circles, in elite schools, and among the budding doyens of Labor youth movements. In 1941 he joined the Palmah. The War of Independence “catapulted him from a mid-level officer in the Palmach to one of the IDF’s best-known senior officers,” writes Rabinovich.Rabin is accused of expelling Arab inhabitants from villages conquered in 1948, a fact he admitted in 1979. The biographer concludes the reality of today is “far removed from the considerations the political and military leadership had to take into account in July 1948.” In the 1950s, Rabin was one of the first IDF officers sent abroad to be educated at a military staff college. He slogged through appointments along the Golan, defending Israel from Syria’s provocations. Rabin told an interviewer that Israel should respond in kind, “against the perpetrators and against the regime that supports them.” Rabin got his wish in 1967 when Israel went to war and crushed the armies of Egypt, Jordan and Syria. Readers expecting a military history here will be disappointed.The author is more interested in the lead-up to the war and Rabin’s breakdown from exhaustion before it was launched, than the intricacies of battalions and brigades.Rabinovich expertly sketches the “Siamese twin” rivalry and relationship with Shimon Peres that lasted from the ’70s to ’90s. He also leads readers through the fascinating discussions with Jordan in 1974 when King Hussein asked Israel to give him a strip of land in the Jordan Valley to separate the kingdom from the Palestinians. Rabin also “supported the establishment of settlements in the Golan Heights, in sparsely populated parts of the West Bank and in areas around Jerusalem that were designated to become part of Israel once a final status agreement could be reached,” writes Rabinovich.The most fascinating part of the book deals with the last years of Rabin’s life, when he was trying to come to peace agreements with Syria, the Palestinians and Jordan. The Syrian track is now forgotten amidst the bloodshed across the border, but serious thought was made of giving up the Golan in the 1990s.Most interesting are Rabin’s comments in an October 1995 speech, after the Oslo Accords, when he told the Knesset that the Palestinian “entity” in the West Bank would “be less than a state... we will not return to the lines of June 4, 1967.” Rabinovich is careful to remind readers that the soldier-statesman was not a dove. He was “a centrist leader, preoccupied with Israel’s security.”In the words of Henry Kissinger, “Yitzhak was not a flower child.”