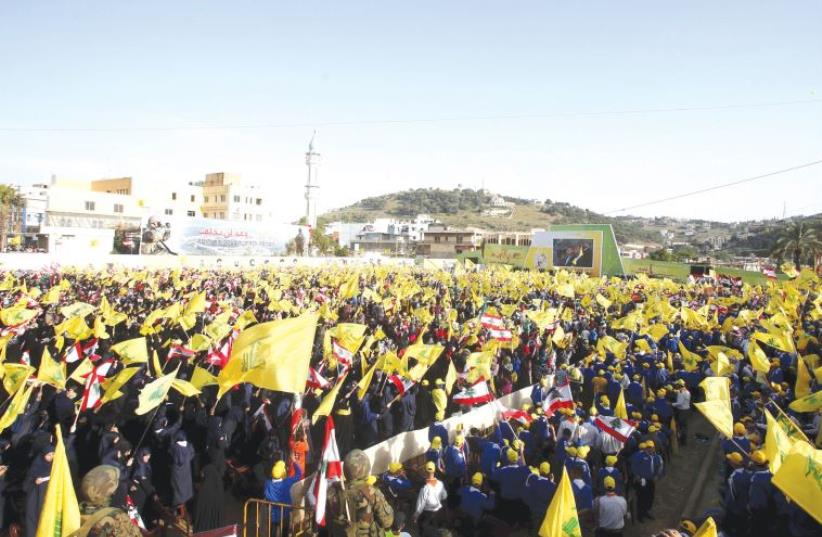 Residents gather to watch Hezbollah leader Sayyed Hassan Nasrallah on a screen during a televised speech at a festival celebrating Resistance and Liberation Day, in Nabatiyeh on May 24, 2015.
(photo credit: REUTERS/ALI HASHISHO)
Advertisement
HEZBOLLAH TO ‘MOBILIZE’ IN PROTECTION OF ASSAD
Al-Hayat, London, May 27 Hezbollah Secretary-General Hassan Nasrallah delivered an angry televised address last week, informing all of us that his movement will continue defending Lebanon from extremist groups and will expand its operations in Syria. How can we thank the honorary secretary enough, for his “love” of the nation and “protection” of its people? How can we express our eternal gratitude for his assistance to Syrian President Bashar Assad against Islamic State – an organization Assad himself helped create? By now, it is well-known that Islamic State began emerging in Iraqi prisons during the American occupation, with support and funding from Iraqi Ba’athists and Assad. His regime provided an open-door policy to anyone seeking to enter Iraq and cause turmoil; his intelligence services gave jihadists directives and directions.Nasrallah is not fighting in the name of Lebanon; he and his organization will lose their battle in Syria sooner or later, as the territories they control are scant and weak.
Read More...
There is no doubt the spread of Islamic State, particularly towards our borders, is scary – but Hezbollah is not going to be our savior. I would encourage the secretary- general to reconsider his position and reduce his arrogance. What Lebanon needs is a responsible and loyal army, not an Iranian-backed militia that represents Syrian interests in Lebanon. – Randa Taki al-Din
TURKISH WARPLANES ENTER THE SYRIAN FRAY
Al-Sharq Al-Awsat, London, May 27 A great development occurred on the Syrian front this week, when Turkey agreed with the US and for the first time ever, actively intervened in the Syrian quagmire. From now on, the Turkish Air Force will provide air protection to the opposition forces fighting inside Syria. While many believe the target of this new campaign is Assad, they will quickly discover that the move is aimed mainly against Islamic State. There are currently several forces fighting within Syria, from Islamic State to Hezbollah to Assad loyalists.Supporting the opposition is likely to strengthen the moderate opposition at the expense of the other groups. Istanbul is finally willing to step up its game, most likely because it finally understands the risk posed to its borders by the territorial expansion of Islamic State.For the first time ever, opposition forces will be able to establish their authority over defined territories, due to Turkish reassurance and protection. Eventually, this could lead to one of two things: The integration of moderate forces into a transitional government under Assad, which will facilitate his peaceful removal; and the splitting up of Syria into smaller autonomous territories, some controlled by the rebels. Only time will tell which scenario it will be. – Abdulrahman Al-Rashed
A GAP BETWEEN GENEVA AND RIYADH
Al-Ittihad, United Arab Emirates, May 28UN Secretary-General Ban Ki-moon ordered a special summit in Geneva to discuss the current crisis in Yemen, and begin peace talks. This summit is doomed to fail before it even began; the revolutionary forces in Yemen violated the humanitarian truce this week and continued their killings, despite the Saudi restraint. They are likely to continue manipulating the international community without truly working to achieve a long-lasting ceasefire.All of this stands in complete contrast, however, to the success of the Riyadh Conference, held last week under the auspices of King Salman. The Saudi conference initiated a Yemeni national dialogue that included all Yemeni political groups and blocs, from both the northern and southern parts of the country. It concluded with a joint agreement, the Riyadh Declaration, which called to save Yemen, rewrite its constitution and build a federal state.The expected failure of the Geneva summit makes this document all the more important. The Riyadh guidelines are the only feasible basis on which a solution on Yemen could be implemented. The UN is correct in seeking to quell tensions in the war-torn country, but the timing isn’t right. The Yemeni national forces, under the guidance of the Gulf Cooperation Council, must first draft a constitution. Only then would the UN be able to take over the efforts, administer a referendum and facilitate a democratic voting process. – Wahid Abd al-Majid
THE ‘ULTRAS’ ARE IN DANGER
Al-Masry Al-Youm, Egypt, May 20 One of the first things Egyptian President Abdel Fattah al-Sisi did after ousting his Muslim Brotherhood predecessor was enact new terror laws. Under the new regulations, the government was given the right to outlaw any organization imposing a threat to public order. This law took a surprising turn when last week, the Cairo Court of Urgent Affairs cited the bill to ban the “Ultras” soccer club. Beginning next month, any members affiliated with the Ultras will be considered by authorities to be “actively involved in a terror organization.”Ultras Ahlawy is one of Egypt’s oldest soccer fan clubs, and by far the most well-known in the Egyptian capital. Its members took an active part in the Egyptian revolution of 2011 that brought down Hosni Mubarak. The club’s name came into the headlines again in 2012, when over 70 of its members were killed in violent clashes during a match with a rival group in Port Said; this past February, yet another violent clash took place outside Cairo’s Air Force Stadium, where over 20 fans were killed.Since then, the government has blamed the Ultras for having links to the Brotherhood and inciting public disobedience and violence. This ruling is most likely aimed at deterring Sisi’s opponents from attempting to take to the streets against his regime.