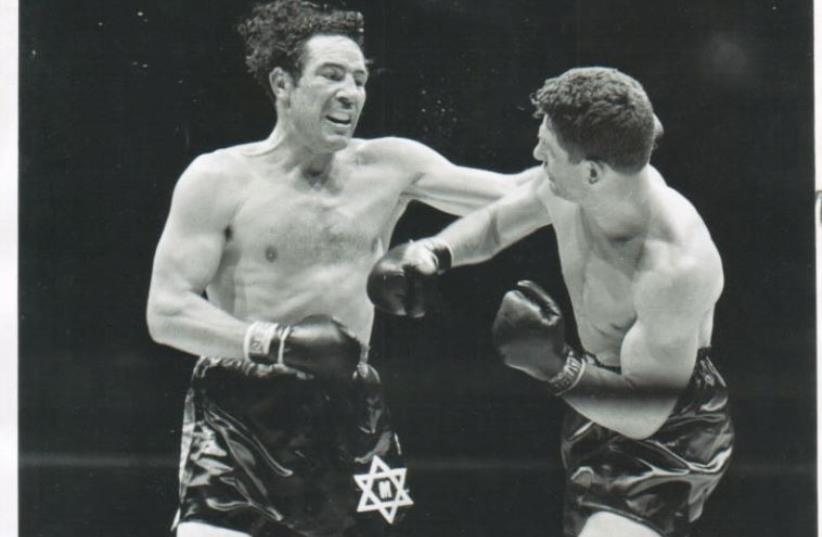 Max Baer (left) takes on Lou Nova in a fight in 1939
(photo credit: Courtesy)
Advertisement
Max Baer and the Star of David is a novel, nominally about its titular character, a boxer who wore a Star of David on his shorts and gave fatal blows to two fighters.The facts behind the plot of the novel are true: After the bouts that ended in the death of one fighter, Baer gave money to the fighter’s widow and felt conflicted about continuing to fight. He had a sparring partner who knew the Bible by heart.Baer was world heavyweight champion for a year in 1934 and defeated German fighter Max Schmeling, a favorite of Hitler’s, in New York in 1933 – wearing his Jewishly inflected shorts. In addition to his fighting life, Baer acted in almost 20 movies, including with Myrna Loy, Abbott and Costello and Humphrey Bogart.
Read More...
Seeing all the real drama in this character’s life, it is hard to imagine what more a fiction writer could add. Jay Neugeboren, however, delivers expanded blows in prose. Baer is a larger-than-life character on the page, described as having “power out of all proportion to his size, stamina that was not vitiated by the high life he favored, and defensive reflexes that kept his face free of welts and scars.”The book is much more than sports writing. Commentary on the Song of Songs is woven into its pages, as is discussion of love – both of the heterosexual and homosexual variety, sometimes by the same character, as well as interracial relationships. A blind character is in there too, as well as incest and disguised identities, which appear as themes.Even readers who don’t think themselves interested in sports will enjoy the descriptions and plot developments.“He loved the fighting itself far more than he admitted or knew,” Neugeboren wrote.“I believe he loved being lost in an elemental passion for hitting and being hit – in the licensed savagery permitted when, before cheering and bloodthirsty fans, he was free to inflict violence upon another man without the least need to temper the violence with mercy.“He also loved the gratification that came with practicing a craft at which he was a master, and which, like the act of love, and the ecstasy of being in love, fed his desire to take as much pleasure from life as possible, as though the extended moments in which he could give free rein to his power and his desires – whether in the ring or in his romances – served to enhance and heighten his love of life itself.”These are the words of Horace Littlejohn, the narrator of the book and a possible descendant of the same Falconhurst slaves that gave way to Muhammad Ali.Littlejohn and his sister Joleen encounter Max Baer at a restaurant when Baer notices the “Long-fingered Littlejohn” he has heard about in the gym.Littlejohn at first refuses to entertain Baer’s proposal to be a training partner until Baer swings at him and Littlejohn deflects the punch, showing his quick reflexes.Baer is attracted to the couple for their beauty and because he wants everyone to like him – with one exception.“The other guy may be the nicest guy in the world, but once the fight starts, we don’t know each other,” he says.“Once that bell goes ding-dong, all I care about is him feeling the power I got here.”The true hero of the book is imagination, which allows all characters escape from their lives. Horace, the son Baer has with Joleen, becomes a Bible scholar, writing and publishing a paper at 19. His professor says, “Horace had everything a true scholar needed to succeed – splendid research skills, an admirable work ethic, a passion for his subject, a felicitous prose style, and – above all – what was lacking in most Bible scholars – imagination.”For any reader who cares about good writing and imagination, lover of boxing or not, Max Baer and the Star of David is required reading.