Travel: Out of Africa

South Africa’s troubled streets and tragic politics are no reason to avoid visiting its pristine landscapes and stunning wildlife. 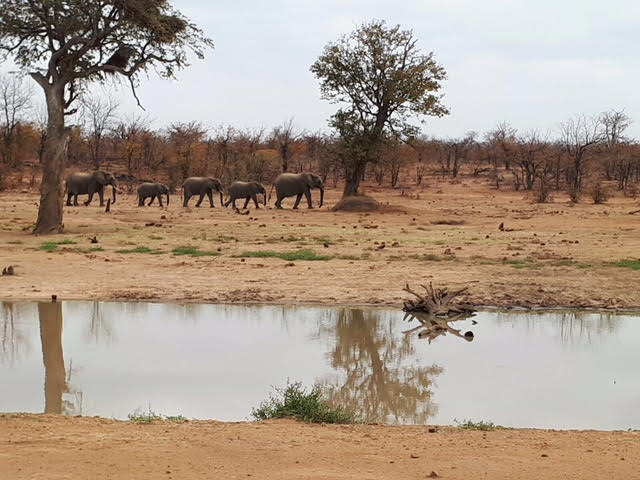 A herd of elephants at Kruger National ParkTravelers seeking a more comprehensive safari might prefer Kruger, due to its size – equivalent to almost the entire State of Israel. Those who want to reach the west faster would do well to pick smaller ranges, like Lalibela, and lodge in tastefully furnished, rural-African style chalets with observation decks where a family of humans can enjoy a royal meal while exchanging glances with a family of elephants drinking and bathing at a nearby waterhole.If you emerge from your safari disappointed that this or that animal you expected did not show up – don’t worry, chances are you will meet it elsewhere.That is what happened to us with baboons, which we saw in abundance along the roads of the Cape Peninsula, and in entire herds in the Robertson Valley; with giraffes, which we saw grazing calmly in a ravine outside Lalibela; with elephants, which we saw congregate in the hundreds in the Addo Elephant National Park, not far from Lalibela, where we saw them in smaller numbers; with seals, which we saw sunbathing in flocks on Duiker Island outside Cape Town; with penguins, which we saw in what sounded like a conference, in the Cape Peninsula’s Boulders Beach; and with the rock hyraxes that I saw atop Table Mountain admiring its oceanic view from a cliff’s edge.Seals gather on the rocks of Duiker Island in Hout Bay, outside Cape Town.In all such parks and ranges, the animals are not only visible roaming freely in their natural settings; their survival is entirely their own responsibility, as no zookeeper will bring them even an ounce of what their varied diets demand. Visiting them in their habitats thus made me share the Psalmist’s awe when he waxed poetic that “the lions roar for prey, seeking their food from God,” and that, as I too can now attest, “when the sun rises, they come home and couch in their dens.”Having said this, South Africa is worth a visit not only for its wildlife but also for its flora and landscapes.IN THE northwest, the arid Richtersveld’s bronzy slopes shoot up from sands at sea level to sharp volcanic peaks of more than 1,300 meters that overlook whitewater rafters as they wrestle with the Orange River’s gushing waters.By August, some 200 km. south of there, in the Namaqua National Park, southern winter rains produce daisies, lilies and more than 1,000 types of flowers that grow nowhere else and whose dizzying carpets stretch for hundreds of square kilometers.About 500 km. northeast of there, in the Witsand Reserve, snow-white dunes collide with the Kalahari Desert’s red sands. A strange whistling sound is created when the heat releases air from the grains. This attracts bikers and hikers to the surrounding slopes – and Humvees to a 64-km. route that slices through the dunes.A further 600 km. east, in the Royal Natal National Park, the Tugela Falls plunge at least 948 meters (nearly a kilometer) in five stages, forming what all agree is at least the tallest waterfall in the world after Venezuela’s Angel Falls. Others, measuring it at 983 meters, contend it is the tallest by four meters. Either way, local trails allow hikers to admire it from the 3,282-meter Mont-aux-Sources, which overlooks the sources of several rivers, including South Africa’s longest, the Orange, whose Atlantic terminus is more than 1,200 km. away.South Africa, in short, is so rich and varied that firsttime visitors must first decide where not to go, and then chart an itinerary custom-tailored for their preferences and abilities.

We took the famous Garden Route, which straddles the southwestern coastline. The choice proved rewarding, as it unveiled not only much wildlife but also thick and ancient forests like those of Tsitsikamma National Park, where we saw a 36-meter-tall, 800-year-old yellowwood tree; great water sports locations, like Storms River, whose mouth we crossed on a lovely suspension bridge while canoers under us rowed inland between mysterious grottos and forested cliffs; and immaculate beaches like the one off Wilderness, a town of 6,000 where we lodged and got a glimpse of the quaint, solemn and safe South Africa that sprawls beyond its big cities; and the Cango Caves, whose thicket of stalactites and stalagmites is well landscaped with smart lighting and engaging guiding.Beyond such surprises along the coastline, the Garden Route includes the pristine winelands that unfold to Cape Town’s north and east and produce some of the world’s best wines.Traveling through Robertson Valley, the deep green of endless vineyards joined the violet of the semi-arid Langeberg and Riviersonderend mountains that overlook this celebration of fertility, which we saluted by entering a local winery and toasting its flavorful cabernet sauvignon.THE GARDEN ROUTE can also include a peek into an improbable Jewish landmark, in the town of Oudtshoorn, some 350 km. east of Cape Town and 50 km. north of the Indian Ocean.As you approach this town of 60,000 you will see thousands of ostriches in farms along the road, as would befit “the ostrich capital of the world,” and the center of the feather-fashion industry on which it has thrived since the 19th century.Jewish traders joined the city’s unique industry and established a community that at one point numbered 600 families. The community began declining already a century ago, but its handsome synagogue still stands, lean and well kept on Baron van Rheede Street.In it I found 82-year-old Avraham Moshe Lifshitz, who after showing us the shul and its waterless mikve, said the community still numbers 20 people, whose children – including his – have long since moved, mostly to Cape Town, Australia and Israel.“When one of us is sick we have no minyan,” he said.South Africa’s Jewish story is obviously a lot more than that, as a visit to the Jewish Museum in Cape Town attests. An architectural landmark in its own right, the thoughtfully arranged museum that was officially opened by Nelson Mandela in 2000 is adjacent to the fully active Gardens Synagogue, whose building and congregation date back, respectively, to 1905 and 1841.Standing in its sanctuary of more than 1,000 seats between the elegant stained windows that flank it and above the Hanukka programs neatly placed on each of its seats, and bearing in mind South African Jewry’s shrinkage over the past half century from 120,000 to 70,000 members, this is a particularly evocative setting in which to consider Jewish history’s elusive dynamics.Even more thought-provoking is the rest of Cape Peninsula, which stretches into the Atlantic Ocean 45 km. from Table Mountain, where this feature began.Notwithstanding its unique flora and fauna, this deliberately uninhabited preserve is crowned by Cape Point, where I took the funicular to the lighthouse that looms 87 meters above the ocean below. From there I trotted to the lower lighthouse, whose intense flash is visible by vessels more than 100 km. away.Standing here, one has to think of Vasco da Gama sailing through these waters more than 500 years ago, and how history might have evolved had he and his colleagues not chosen to brave this African frontier.CONSIDERING THEIR own way to brave the African frontier, some tourists prefer the certainty and security of an organized tour, which can explain Tel Aviv-based Eshet Tours’ report that it took 25,000 Israelis to African destinations in 2017, of which the most popular is Tanzania.“We believe demand for touring South Africa will grow,” predicts CEO Ephraim Kramer, who says his company is the largest Israeli tour operator for foreign tours and the third largest overall, with annual sales of NIS 1.1 billion.Being the great believer that I am in independent travel, I joined with a measure of skepticism such an organized tour, a random collection of Israelis including a middle-aged couple with their teenage boy and girl and a cluster of retirees.Fortunately, the group leader – a former defense-establishment executive whom we’ll call Ofra K. – handled the group with skill, knowing how to explain history, geography and sociology to a mixed audience, when to tell a joke, when to show a movie, how to look after travelers with special needs, and most importantly, how to make everyone avoid an Israeli attitude to punctuality.Equally fortunately, the group’s local guide, Charl Rabie, did wonders explaining to me South African history from the perspective of a native whose European forebears arrived here some 250 years ago.Hearing Rabie interact with everyone everywhere in Afrikaans, I learned that it is the main language among the land’s 55 million blacks and whites; that there is an effort to delegitimize it as the language of the apartheid regime; and that this campaign, in his view, must fail. Understandably, he was inspired to learn how Hebrew was resurrected, concluding that “killing a language can’t work.”Such, in brief, is South Africa, where any peek, stroll or conversation can instantaneously morph into a valuable learning experience – which vindicates Limor’s answer, after I asked her why she and her husband, Amnon, took their kids on this trip during the school year: “This is no less educating than school.”After more than a week of encounters with a troubled country’s dizzying landscapes and roaring wildlife, I finally heard an understatement. The writer was a guest of Eshet Tours