The tradition we keep, keeps us

A Yad Vashem online exhibition looks at Passover traditions before, during and after the Holocaust. 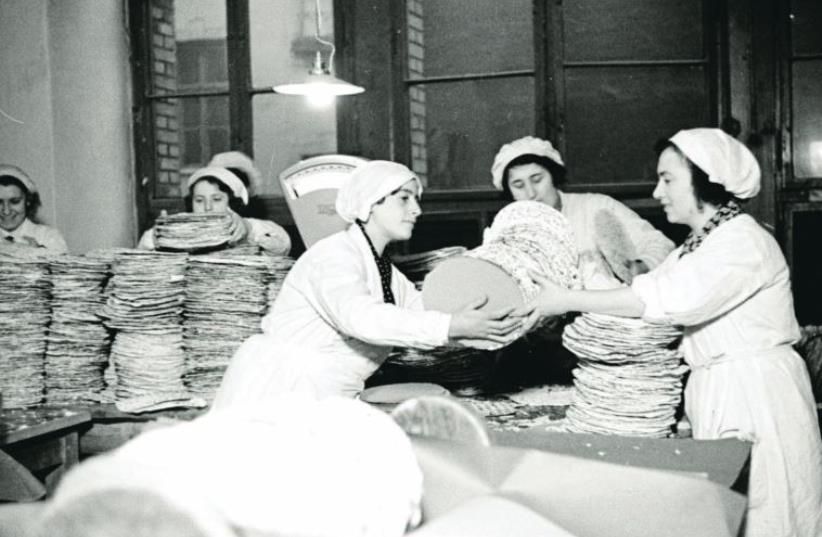 Making Matza
(photo credit: YAD VASHEM)
There are three significant times in history that categorize European Jewry: the time before the Holocaust, during the Holocaust and shortly after; a relatively normal Jewish existence, the harrowing years of death camps and hiding, and then the time of recuperation and rebuilding.It’s these periods that inform a new, unique, online exhibition for Yad Vashem, “And You Shall Tell Your Children: Marking the Holiday of Passover Before, During and After the Holocaust.”This exhibition, presented in Hebrew, English and Spanish, is meant to be viewed and experienced all over the world. The multimedia display contains photos, artifacts and video testimony showing and describing how Jews prepared and observed Passover during this defining time in European Jewry.
Read More...
Links at the top of the page organize the content into the respective time lines.The images are incredibly moving. For example, at the Herzog matza factory in Berlin in 1936, female workers in crisp white uniforms maneuver around stacks of hundreds of matzot, sure to be bought by and delivered to hundreds of excited families. Yet only seven years later, a more chilling image is captured. Men and women crowd in a stone cellar, a few paltry stacks of matza at their feet, as the baker, covered in dirt and sweat, looks directly into the camera. The caption reads “Baking matza in hiding, Lodz, Poland, 1943.”Then, on April 9, 1946, a crowded table set with fine china on a white tablecloth, glasses full of wine and decorated with lit candles and flowers gives off a regal atmosphere – yet it is in direct opposition to the feeling and sentiments of the people gathered there and the location itself, a displaced persons’ camp in Germany.Dana Porath, director of the Internet department in the communications division of Yad Vashem, says the impact of the exhibition is being able to visualize how drastically things changed in such a short time.“Looking at the Jews before [the Holocaust], their general feelings of optimism and excitement... and then during the Holocaust when you look at those pictures and you imagine to yourself – we can’t possibly put ourselves in that place – but thinking of the tremendous effort and how important it was for them to maintain the human spirit... to hang on to Jewish customs and traditions... I would assume the concept of liberation and freedom certainly had a very different significance at that point.”Most moving for Porath are the video testimonies of survivors describing their memories of preparing for and celebrating Passover, especially the Jews who prepared for the Seder in the Warsaw Ghetto, shortly before the uprising.“They are extremely powerful and strong,” she says.The online exhibition is part of the museum’s ongoing effort to engage on social media – YouTube, Facebook, Twitter, Instagram, Pinterest – and promote specially curated online exhibits that focus on how Jews observed the holidays before and after the war. Since 2008, Yad Vashem has posted survivors’ video testimonies on YouTube and since then, Porath explains, they have grown to seven YouTube channels, websites in seven languages, hundreds of video testimonies and additional links to relevant information.Online exhibitions the museum has curated include topics like women in the Holocaust, children, events and places within the mosaic of immediately before the Holocaust, during, and shortly after. These are then shared across the different platforms on the Internet.“Social media have really been an opportunity of what I would call, almost unprecedented possibilities,” Porath says.“For the most part,” the director continues, “the response of the public has been very positive and has reinforced our feeling that if we are able to put meaningful, timely, relevant, accurate content in social media that people can share, that people will respond.” You can see the exhibition at www.yadvashem.org/yv/en/exhibitions/passover/ index.asp
Cancel Subscription