This Week in History: Violence in the Old City as new tunnel opens

Premium special: A glimpse into historical moments in Israeli news from this week in 'The Jerusalem Post' front covers.

By CAROLINE FRANK
SEPTEMBER 23, 2014 16:54
A Palestinian youth hurls stones in the direction of Israeli soldiers at a road block on the outskirts of Ramallah, September 25, as large scale riots took place over the opening of a tourist tunnel in Jerusalem's Old City.
(photo credit: REUTERS)
Advertisement
This week in history we look at significant historical events that changed the face of the Middle East. In the final weeks of September 1996, Arab riots took over the Western Wall Plaza in Jerusalem following the opening of a new exit to the Jewish historical site of the Western Wall. In 1980, armed conflict broke out between the Islamic Republic of Iran and the Republic of Iraq. The war lasted until August 1988 and in September 1989, Israel called for a an Israel-Iraq summit in Egypt. 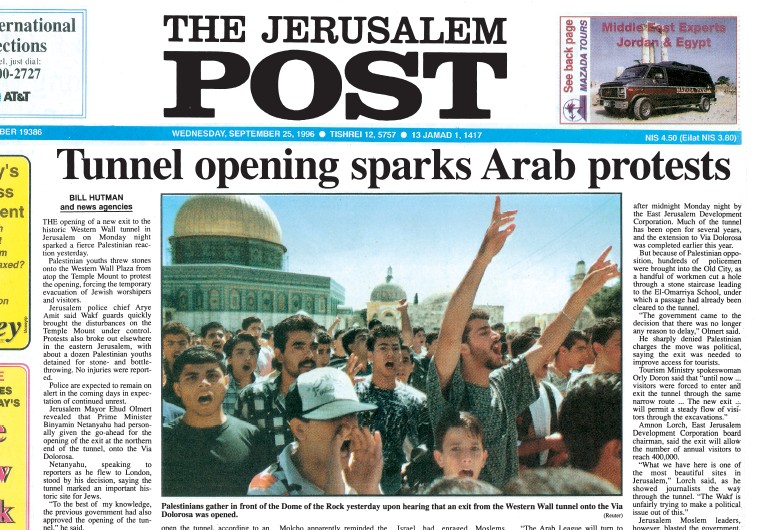 On September 25, 1996, The Jerusalem Post reported on the Arab protests which began following the opening of a new exit to the Western Wall in Jerusalem. At the time, Prime Minister Binyamin Netanyahu had given the go-ahead for the opening of the exit at the Via Dolorosa. A violent uprising ensued in which Palestinian youths threw stones onto the Western Wall Plaza from atop the Temple Mount, forcing the evacuation of Jewish worshippers and visitors. Further violent protests broke out in east Jerusalem. The Arab riots ended on September 27.
Read More... 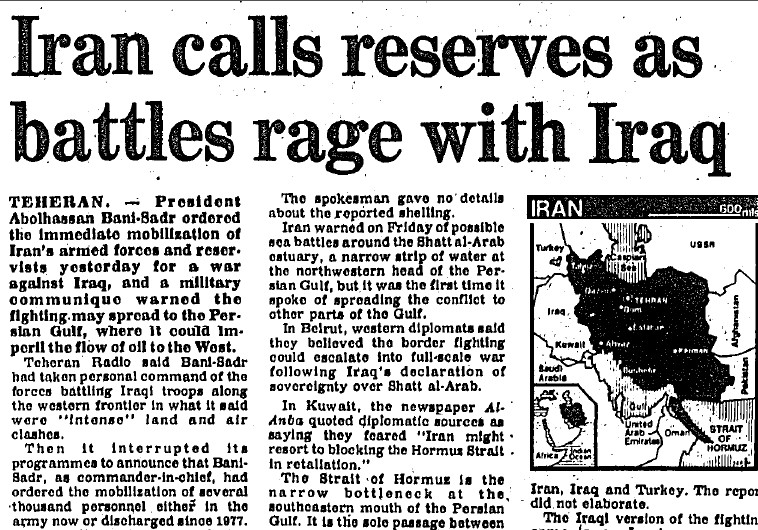 Thirty-four years ago, on September 22, 1980, the Iran–Iraq War began. Then Iraqi leader Sadaam Hussein launched a massive military invasion where Iraq invaded Iran via air and land. It followed a long history of border disputes. The Post reported that then-Iranian President Abolhassan Bani-Sadr having ordered the mobilization of Iran's armed forces and reservists for a war against Iraq, and a military communique warned the fighting could spread to the Persian Gulf. The Iran-Iraq War lasted until 1988. 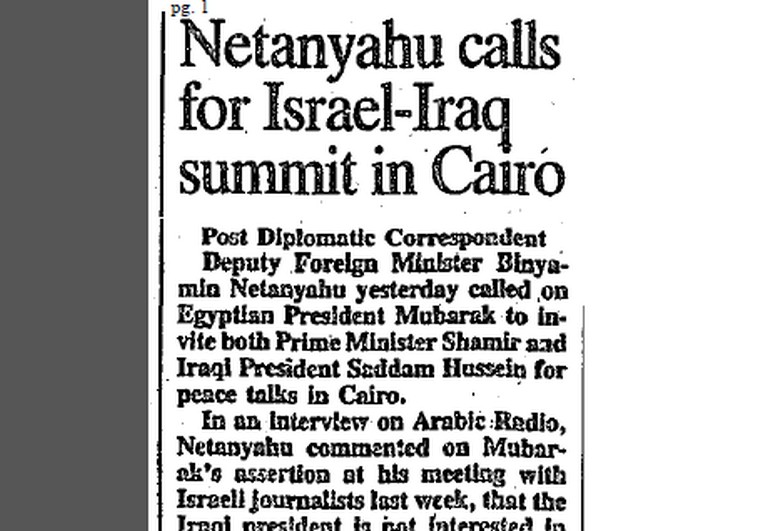 On September 26, 1989, then-deputy foreign minister Binyamin Netanyahu called on then-Egyptian president Hosni Mubarak to invite then-Israeli prime minister Shamir and then-Iraqi president Saddam Hussein for peace talks in Cairo. The Post reported that Netanyahu said such a summit could be beneficial to the peace process overall as well as the resolution of the conflict with the Palestinians.
Advertisement
PREMIUM Log Out
Subscribe for our daily newsletter