16 years ago, 23 people were murdered just north of Mea Shearim

More than 130 were also wounded when a Palestinian suicide bomber detonated a five-kilogram device on an Egged No. 2 bus. The terrorists and families have received almost NIS 2.7 million since then. 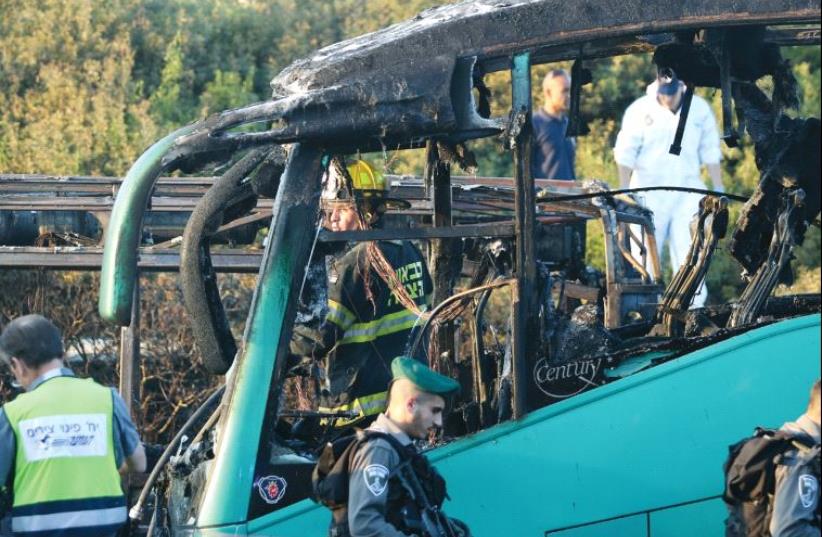 Border policemen and firefighters stand near a bus that was bombed in a terrorist attack in Jerusalem in April
(photo credit: MARC ISRAEL SELLEM)
Advertisement
Sixteen years ago this past Friday, according to the Hebrew date, 23 people were killed – including seven children – and more than 130 wounded when a Palestinian suicide bomber detonated a five-kg. explosive on a no. 2 bus in the Beit Yisrael neighborhood in central Jerusalem, just north of Mea Shearim.
Many of the passengers were returning from praying at the Kotel. The attack happened on the eve of the Hebrew month of Elul, the month leading up to Rosh Hashanah, a time of year when many seek repentance and spiritual renewal.
Six Hamas terrorists were involved in the attack: the suicide bomber, two terrorists who were caught and killed, and three others who were arrested and sent to jail. According to Palestinian Media Watch (PMW), the incarcerated terrorists and the families of the dead terrorists have received a total of NIS 2,692,500 from the Palestinian Authority since 2003.
Each month, the three incarcerated terrorists receive a monthly salary of NIS 7,300, the PMW explained. After being in jail for 15 years, the PA raised the terrorists’ monthly salaries from NIS 6,000 to NIS 7,000. In addition, because the terrorists held “blue IDs,” as they were residents of Jerusalem at the time of the attack, each receives an additional NIS 300 per month.
In four years, the PA will raise their salaries again, as per the PA’s terrorist pay scale. They can ultimately get as much as NIS 12,000 per month plus the NIS 300, so long as they are imprisoned.
The families of the dead terrorists receive NIS 1,400 per month, according to PMW.
The PA has long had a “Pay-for-Slay” policy, by which it pays monthly salaries to terrorist prisoners and the families of terrorists who were killed in the act or upon arrest.
In February, Israel implemented the “Pay-for-Slay” Law that instructs the state to deduct and freeze the amount of money the PA pays in salaries to imprisoned terrorists and families of “martyrs” from the tax money it collects for the authority. The law was passed in July 2018 and was approved for implementation by Israel’s security cabinet this year. In 2019, the cabinet is withholding approximately $138 million.
As a result of this specific attack and other similar attacks, the cabinet at the time decided to wage an all-out war against Hamas and other terrorist elements, and to freeze the diplomatic process with the PA.
Hamas has been listed as a terrorist organization in the United States since 1997. The European Union and Canada today also recognize Hamas as such.