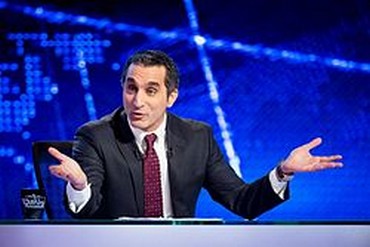 CAIRO - Egypt's top TV satirist was pulled off the air on Friday, a week after he poked fun at the army chief who ousted Islamist President Mohamed Morsi in July.The move is likely to raise further questions about authorities' commitment to freedom in a country stumbling in its political transition since autocrat Hosni Mubarak was ousted in a popular uprising in 2011.Just before satirist Bassem Youssef's show The Program was due to start, an anchor from the CBC channel said the last episode had caused discontent on the street and violated editorial policy.He said the channel had decided to suspend the show until editorial and commercial disputes with Youssef were resolved.Youssef, known for his fierce jabs at Morsi, returned to his show last Friday following a summer break, poking equal fun at Army Chief General Abdel Fattah al-Sisi.Referring to the ruler of the country, Youssef later displayed a projected image of Sisi before quickly swapping it with the image of the interim president, Adly Mansour.He made extensive fun of the adulation of Sisi's admirers"Sisi has turned into ... chocolate!" said Youssef, joking about the chocolate bars that have been molded into the defense minister's likeness in confectionary stores.Youssef's criticism of Sisi was mild in comparison to the jokes he has aimed at Morsi, Egypt's first democratically-elected president.He rose to fame with a satirical online show after the revolt that swept Mubarak from power. His program, which was later broadcast on Egyptian television, has been compared to the US satirical comedy "The Daily Show with Jon Stewart".John Stewart praised host Bassem Youssef for taking risks to poke fun at Egypt's then ruling Islamists and others, when he appeared on Yousef's show last June. "If your regime is not strong enough to handle a joke," he said, "then you don't have a regime."Political tensions are running high in Egypt just before Morsi and 14 other senior figures in the Muslim Brotherhood are due to face trial on Monday on charges of inciting violence.Sisi announced a roadmap that would lead to free and fair elections when he toppled Morsi after mass protests against his rule.Critics of the military say it is tightening its grip on power and returning the country to Mubarak's era of iron-fisted rule, an allegation it denies.Hundreds of Brotherhood members have been arrested and its top leaders are behind bars. The movement, which won every election since Mubarak's fall, says the army's July action cannot be described as anything other than a coup.The military says it was responding to the will of the people.