Analysis: Showtime for the Egyptian president

Should Sisi’s reforms fail, the country could very well plunge into chaos. 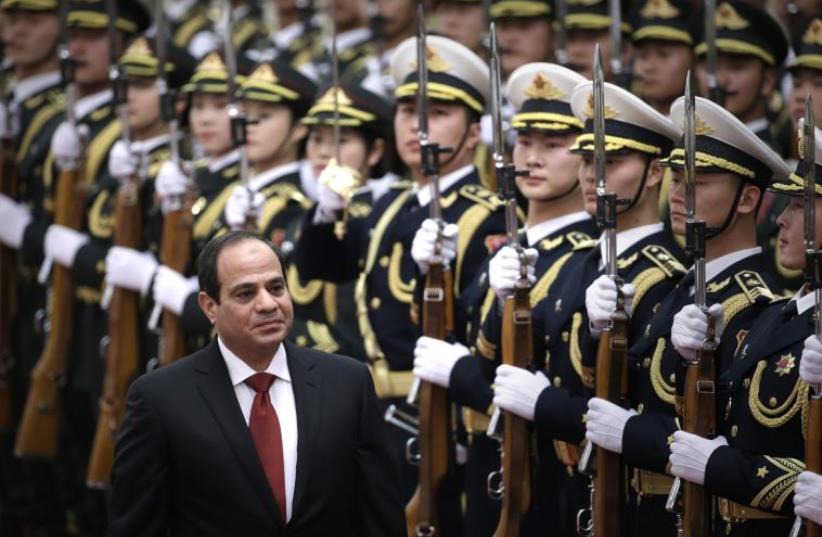 Egypt's President Abdel Fattah al-Sisi inspects honor guards in Beijing
(photo credit: REUTERS)
Advertisement
Western media have been quick to speculate about the end of the road for Abdel Fattah el-Sisi, pointing out a rapidly dropping approval rate.Above 90% a few weeks ago, it now stands at “a mere” 68% – a rating that many a Western leader would be ecstatic about. Nevertheless the Egyptian president is doggedly pursuing his objective of reforming the economy and putting his country squarely on the road to sustainable growth.He has achieved a lot so far, launching or completing a number of mega projects.There is the doubling of the Suez Canal carried out within one year by the army – no mean feat – and a source of great pride to the Egyptian people. He has initiated the building of a new capital east of the present one. It will be the seat of the huge Egyptian administration, easing the congestion of the old capital, now slated to become a touristic and commercial hub.An estimated 3,000 km of new highways are at various stages of planning. Reclaiming one and a half million feddan (about 1.5 million acres) will extend agriculture lands into the desert. More prosaic but no less vital was the cleaning and rehabilitation of silos, where every year 30% of the wheat, main staple for the Egyptians, rot because of dirt and negligence.Sisi has also boosted research and development of oil and natural gas resources; once an exporter, Egypt now needs to import at great cost the oil and natural gas it needs. Improving the situation can take a few years. The process could be greatly accelerated if the West decided at long last to help Egypt. It has not happened so far.Western countries led by US President Barack Obama still see in president Sisi a military dictator who grabbed power from a “democratically elected president.” They do not want to admit that Morsi was toppled by a popular uprising – admittedly with the help of the army – just in time to prevent him from creating an Islamic dictatorship.Deprived of Western backing, Egypt turned to Russia and China for political support and economic cooperation.The two countries promised to invest in industrial and tourist projects, including the construction of a nuclear power plant by Russia in northern Egypt. Russia also pledged to supply Egypt with advanced weapons.This new alliance put Cairo on a collision course with Saudi Arabia, which opposes Russian assistance to president Assad of Syria. To mark its displeasure, Riyadh announced it was halting shipments of oil to its former ally.A drop in popularity is a small price to pay for the successful completion of long and difficult negotiations with the International Monetary Fund. Egypt is about to receive a $12 billion loan at very low interest. This much needed injunction of foreign capital should help it over the coming months.The loan comes at a price.Sisi had pledged to take drastic steps to reform an ailing economy burdened by a bloated civil service and hampered at every turn by unending terrorism.While the Muslim Brotherhood is still carrying out low-grade warfare against local infrastructure inside the country, the Sinai branch of Islamic State has dealt a series of deadly blows which left Egypt still reeling.The downing last year of a Russian plane has brought tourism to a near standstill.Supply of much needed foreign currency has all but dried out, hampering trade and severely inconveniencing the population. Faced with a black market out of control, and to comply with the exigencies of the IMF, Sisi announced that the pound would “float,” with the rate adjusting daily according to supply and demand. While the rate had been artificially pegged at 8.8 pounds for a dollar, it traded at 18 on the black market. It is now stabilized at about 13, hopefully marking the end of the black market.The moved was welcomed by traders and businessmen.Other measures dictated by the IMF were not as popular.For the first time in history there is a VAT in Egypt. Set at 13% at present, it may not be easily implemented in a country where lots of transactions are still in cash, but it was another of the IMF requests.So was cutting down subsidies drastically for oil and natural gas.There was a corresponding rise in the cost of living, leading to a lot of muttering and general dissatisfaction.Hence the drop in approval rate. Unfortunately, the government felt threatened and tightened security measures as well as pressuring the media.So it is now show time for the Egyptian leader. The next few months will be critical.On the one hand, most Egyptians understand that their president has no other choice; should his reforms fail, the country could very well plunge into chaos. On the other hand, his drastic measures are taking their toll on the poorest of the poor, while the Muslim Brotherhood is busy fanning the flame.Hopefully the new administration in Washington will reverse course and at long last provide much needed relief in the form of investments and transfers of technology.Meanwhile, Israel is quietly helping wherever it can. It could undoubtedly do much more were the Egyptian leadership ready to defy the Islamic establishment and the old Nasserist circles, still bitterly opposed to any form of normalization.

The writer, a fellow of the Jerusalem Center for Public Affairs, is a former ambassador to Romania, Egypt and Sweden.