Britain's parliament will vote soon on whether to approve military action in Syria against Islamic State. 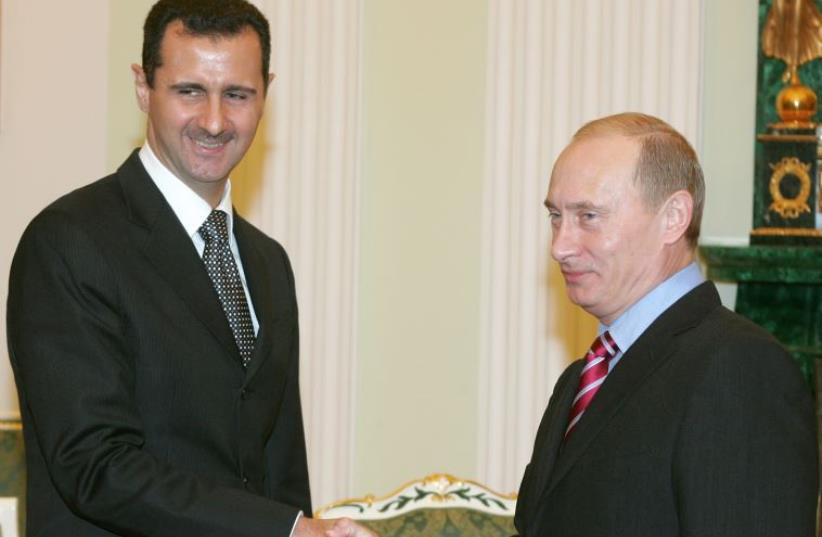 Russia's President Vladimir Putin (R) and Syrian President Bashar Assad shake hands as they meet in the Kremlin
(photo credit: REUTERS)
Advertisement
MANCHESTER, England - British Prime Minister David Cameron said on Sunday that Kremlin chief Vladimir Putin's decision to take military action in Syria to support Syrian President Bashar Assad was a "terrible mistake".Russia has begun striking targets in Syria - a dramatic escalation of foreign involvement in the civil war which has been criticized by some as an attempt to prop up Assad, rather than its purported aim of attacking Islamic State militants."They are backing the butcher Assad, which is a terrible mistake for them and for the world," Cameron told the BBC on the first day of his Conservative Party's annual conference in the northern English city of Manchester."It's going to make the region more unstable, it will lead to further radicalization and increased terrorism. I would say to them 'change direction, join us in attacking ISIL.'"Russia says it is targeting hardline Islamic State militants, but Cameron questioned that position."Most of the Russian air strikes, as far as we've been able to see so far, have been in parts of Syria not controlled by ISIL (Islamic State), but controlled by other opponents of the regime," he said.Cameron is keen for Britain to begin its own air strikes in Syria, joining allies in a US-led coalition against Islamic State, a self-declared caliphate spanning large areas of Syria and neighboring Iraq. British bombing as part of the coalition so far has only targeted Islamic State in Iraq.He signaled that he would push ahead with plans for a vote in parliament to approve military action against Islamic State in Syria, the Daily Telegraph newspaper said in its Sunday edition.Cameron was quoted as saying that British military attacks in Syria "may well become possible." Previously, Cameron has said he sees a strong case for extending British air strikes to Syria from Iraq.After losing a parliamentary vote on the use of force against Assad in Syria in 2013, Cameron has said he would want the support of opposing lawmakers before putting the matter to a vote. The opposition Labor Party, which last month elected anti-war campaigner Jeremy Corbyn as leader, is split on the issue.The newspaper also said Cameron did not believe Russian military involvement in Syria should prevent Britain's attempt to strike at Islamic State."What I am clear about is one of the biggest threats we have to respond to is that terrorist threat," he was quoted as saying.In a move that is likely to please many in his party, he said he would "beef up" Britain's elite Special Air Service regiment (SAS) and buy 20 new drones - known as Protectors - as part of the battle with the militants.After telling parliament last month that Britain had killed two of its own nationals who had been fighting for Islamic State in Syria, Cameron said British militants in Syria would be targeted by drones as a "last resort."