Mohamed Badie, accused of inciting the murder of protesters, found in hiding and arrested; set to face trial on August 25. 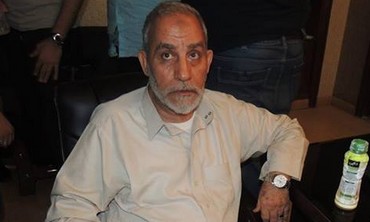 "Carrying out the decisions of the public prosecutor to arrest and bring forward the 'general guide' of the Muslim Brotherhood, Mohamed Badie, and through collected information and observation of movements, it was possible for the criminal search apparatus under the direction of Cairo's security (services) to arrest him," according to the caption.Badie was charged in July with inciting the murder of protesters. Together with his two deputies, he is due to stand trial on Aug. 25.Interior Minister Mohamed Ibrahim told the Al Masry Al Youm newspaper that Badie was arrested in the early hours of Tuesday.The military removed Morsi from power on July 3 after mass protests against his rule. Morsi, who was freely elected but alienated many Egyptians during his year in power, is in detention at an undisclosed location.Egypt's public prosecutor pressed new charges against Morsi of inciting violence in a move coinciding with a court ruling on Monday that toppled military strongman Hosni Mubarak - arrested after his overthrow in 2011 - can no longer be held on a corruption charge.Morsi was already facing an investigation into accusations stemming from his escape from prison during the anti-Mubarak revolt. These include murder and conspiring with the Palestinian Islamist group Hamas.Almost 900 people, including more than 100 soldiers and police, have been killed since the authorities forcibly dispersed Muslim Brotherhood sit-ins in Cairo last Wednesday.'Sharp polarization'UN Secretary-General Ban Ki-moon on Monday called on Egyptian authorities to free Morsi, who faced mass street protests as he marked a first year in office on June 30, or at least ensure a transparent process.Ban also said "the political space for the Muslim Brotherhood should be expanded, because their political space has been very limited.""With such sharp polarization in Egyptian society, both the authorities and the political leaders share the responsibility for ending the current violence. They should spare no effort to swiftly adopt a credible plan to contain the violence and revive the political process," Ban told a UN news conference.The United States also urged Egypt not to ban the Muslim Brotherhood.Founded in 1928, the Muslim Brotherhood used its organizational muscle to propel Morsi to power in last year's presidential election. The group says it has a membership of around one million people in Egypt. The group has inspired offshoots across the Arab world.The Muslim Brotherhood emerged from decades as an outlawed movement to become the best organized political force after the downfall of Mubarak. Members of the Brotherhood - which renounced violence decades ago - are accused by the state of launching a campaign of militancy.