Four Egyptian ministers resigned from the government on Monday, a cabinet official said, a day after protesters poured onto streets to demand President Mohamed Morsi resign."Four ministers presented their resignations today," said the official, who asked not to be named. He gave no reason but the state news agency had earlier said the ministers were considering resigning in sympathy with the protesters.The four were Tourism Minister Hisham Zaazou, Communication and Information Technology Atef Helmi, Minister of State for Legal and Parliamentary Affairs Hatem Bagato and Minister of State for Environmental Affairs Khaled Abdel-Aal. The move came shortly after Egypt's ruling Muslim Brotherhood vowed to take action in response to the ransacking of its Cairo headquarters. The building was overrun by youths after those inside were evacuated on Monday following a night of violence that killed at least seven people.By far the bloodiest incident of Sunday's mammoth and mostly peaceful protests against the Brotherhood and President Mohamed Morsi, it began after dark and continued for hours, with guards inside firing on youths hurling fire bombs and rocks.A spokesman for the Brotherhood blamed the violence on "thugs" and said it would be demanding answers from police who failed to protect it. He said two of those inside were injured - by fires - before a security detail from the movement was able to evacuate all those inside the compound in mid-morning.The violence will likely add to a sense among Brotherhood members, long oppressed under Hosni Mubarak, that they face a political siege since being elected last year, which they blame on liberal opponents and loyalists of the old regime.Images of the four-story suburban building, its walls scorched, windows smashed and looters making off with office furniture, recalled those of the destruction of the state security headquarters when Mubarak was toppled in 2011. 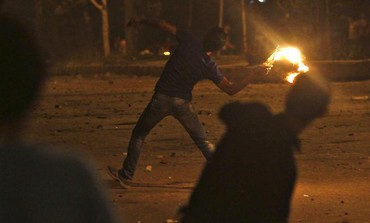 The Brotherhood had fortified the headquarter's walls in the run up to the protests. The building was also attacked earlier this year in protests against Morsi.Medical and security sources said that at least seven people had been killed in the violence at the Brotherhood headquarters - apparently all outside since the movement said its staff suffered only two wounded. State news agency MENA put the death toll in the incident at eight.Medical sources said more than 100 people were wounded.Gehad El-Haddad, spokesman of the Islamist movement, told Reuters in a telephone interview that Egyptians would not sit by and tolerate attacks on their institutions."It's very dangerous for one entity in society to take up violence as a means of change because it may entice others to do so. The Muslim Brotherhood is a disciplined organization," he said, criticizing the security forces for failing to protect the headquarters in Sunday's attack.A security source put the total number of dead across the country since Sunday at 16, with 781 injured. The opposition in Egypt have given President Mohamed Morsi an ultimatum, to resign by 5pm on Tuesday or face mass civil obedience, Israel Radio reported on Monday morning.The protesters have also demanded that Morsi decree a new round of early elections.Five of the dead were shot in towns south of Cairo, one each in Beni Suef and Fayoum and three in Assiut.Sunday's demonstrations, which brought half a million people to Cairo's central Tahrir Square and a similar crowd in the second city, Alexandria, were easily the largest since the Arab Spring uprising that ousted Hosni Mubarak in 2011.After dawn on Monday, young men were still preventing traffic entering Tahrir Square but only hundreds of people remained, some resting under makeshift awnings.Morsi, the most populous Arab state's first freely elected leader, stayed out of sight throughout the protests but acknowledged through a spokesman that he had made mistakes while adding that he was working to fix them and was open to dialogue.He showed no sign of quitting.An aide to Morsi said he was "encouraged" that events had unfolded mostly peacefully : "This is another day of democratic practice that we all cherish," he said in a statement.The massive protests showed that the ruling Muslim Brotherhood has not only alienated liberals and secularists by seeking to entrench Islamic rule but has also angered millions of ordinary Egyptians with economic mismanagement.Tourism and investment have dried up, inflation is rampant and fuel supplies are running short, with power cuts lengthening in the summer heat.Dozens of militants attacked the Brotherhood's national headquarters in Cairo with shotguns, petrol bombs and rocks, setting it on fire, and targeted offices of its political party across the country.There was no sign of police or fire service protection for the Brotherhood's head office, where witnesses said guards inside the building fired on the attackers. Two people died and 11 were injured in that clash, hospital sources said.Protest organizers called on Egyptians to keep occupying central squares across the country in a campaign of peaceful civil disobedience until Morsi quits.Tens of thousands of demonstrators stayed in Tahrir Square long after midnight, appearing to heed the call for a sit-in. But as the working day began, only hundreds remained.
Subscribe for our daily newsletter