Tehran understands that Israeli messages are part of a wider strategy. 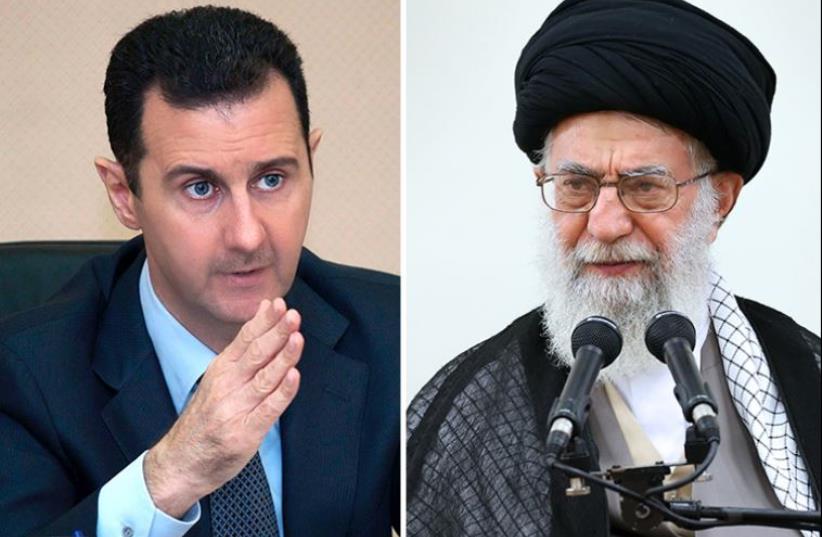 Khamenei and Assad
(photo credit: KHAMENEI.IR / AFP)
Advertisement
Iran is preparing a barrage of missiles to retaliate against Israel, according to recent reports.But Israel has a message of its own. By reporting Iran’s threats to the media, Israel is showing Iran’s hand and playing a high-stakes game to see which side will blink first.
Netanyahu: We are determined to stop the Iranian aggression against us, even if it involves a struggle, May 6, 2018 (GPO)
With Prime Minister Benjamin Netanyahu preparing to fly to Moscow for the annual Victory Day parade, the message for Russia and its Syrian regime ally is that Iran must not consider using Syria as a base of operations against Israel.Numerous reports have indicated for months that Iran wants to retaliate against Israel, especially after Tehran and Russia accused Israel of involvement in numerous air strikes in Syria.But Iran has been frustrated in these efforts for several reasons. First, Iran does not want a major war with Israel. It has economic problems at home and a war would put it at risk of losing some of the gains it has made in Syria, Lebanon and Iraq.Second, Iran is waiting for the Lebanese and Iraqi elections to finish by mid-May. It wants its proxies and allies in Hezbollah and Shi’ite militias in Iraq to gain a greater foothold in government. War would distract from the supposedly peaceful elections, in which Iran’s clients go to the ballot box with a rifle in one hand and a voting slip in the other.Iran is also trying to play the “good cop” to US President Donald Trump’s “bad cop” on the international stage. With Trump expected to make an Iran deal decision next week, Iran threatens that the US would regret leaving the JCPOA Iran deal, but also wants to continue the charade of claiming it only wants a peaceful nuclear program.Iran might even remain in the deal, which provides cover for its real goals if the US leaves. A full-court press by the foreign office in the UK, the UN, and even John Kerry is trying to “save” the deal. And Iran is hoping they succeed.Israel’s message is primarily aimed at Moscow, and via Moscow to Damascus and Tehran. In November, foreign reports indicated that Netanyahu warned Damascus via a “third party” that if Iran set up bases in Syria it could jeopardize the Syrian regime. Then on April 11, another report from a senior official in the defense establishment noted, “Assad’s regime and Assad himself will disappear from the map and the world if the Iranians try to harm Israel or its interests from Syrian territory.”The message is not merely intended for Tehran, though. It is really about Assad.The Assad regime has finally gained breathing space after fighting a brutal seven-year war. Syrian rebel pockets near Damascus and Hama have been defeated, and the rebels are going north under the terms of a “de-escalation” agreement that Russia brokered with Iran and Turkey. Other rebels in the south, near the Jordanian border, are holding to a cease-fire agreement brokered last July between the US, Russia and Jordan. The last thing the Syrian regime needs now is Iran destabilizing Syria by using the country to attack Israel.However, a “barrage” of rockets from Syria aimed at Israel would destabilize Syria. The Assad regime would be imperiled. Russia’s main interest is stability in Syria and the survival of the regime. The stronger the regime, the less need for Iran’s militias to be in Syria.Russia’s primary concern is not Iran or the Islamic Republic’s octopus-like desire to build bases and encroach on the Syrian regime by sending its militias to Syria. Iran has exploited the weakness of Assad to fill up Syria with militias. Every Assad loyalist who dies is replaced by a unit from Hezbollah of one of the gaggle of Iranian-backed forces, such as the units recruited from poor Shi’ite communities in Afghanistan and Pakistan.None of this is in Assad’s interest. He is watching the country being taken from him. The Syrian rebels have been replaced by an Iranian agenda.As far as Israel is concerned, it wants to create more daylight between Assad and Russia on one hand and Iran on the other.The problem is that Iran is a key player in Syria, attending meetings frequently with Turkish and Russian officials as part of the Astana peace process. Israel is not present in those meetings and neither is the United States. So Israel can only really rely on Moscow to voice its concerns.This is the dilemma facing Jerusalem. Israel has threatened Iran and Assad with retaliation. “If Assad allows Iran to turn Syria into a military vanguard against us, to attack us from Syrian territory, he should know that would be the end of him, the end of his regime,” Energy Minister and cabinet member Yuval Steinitz told the Ynet news site Monday.There have also been more than 100 air strikes launched against Syria over the last five years according to a report last year by Amir Eshel, the former Israel Air Force commander.A third method of warning Tehran comes via media reports that reveal Iranian bases or Iranian strategy, or bring Iran’s missile threat to light.Tehran understands that these verbal messages are part of a wider strategy.