The parliament lashed out at Iran and Hezbollah, accusing them of "waging terror attacks against local security forces to serve their foreign agenda and destabilize Bahrain." 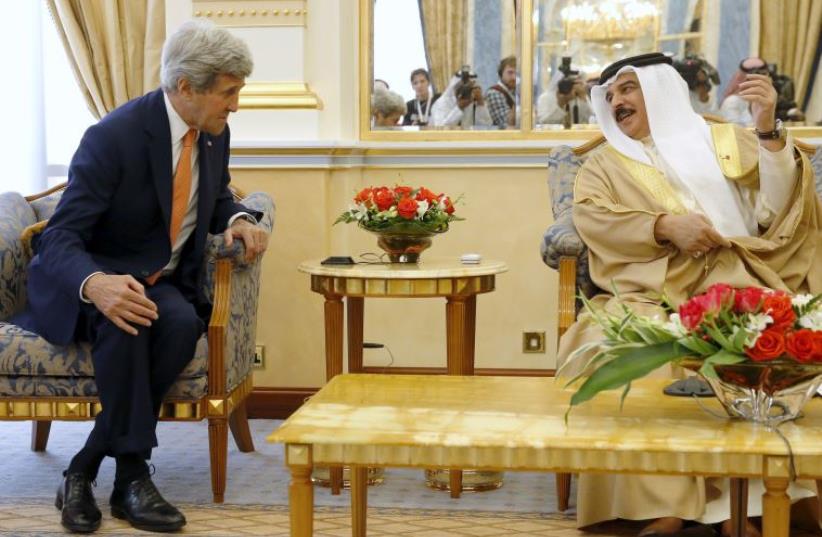 Bahrain's King Hamad bin Isa al Khalifa welcomes U.S. Secretary of State John Kerry at Gudaibiya Palace
(photo credit: REUTERS)
Advertisement
The parliament in Bahrain issued a statement calling on the government to declare war on Iran and its client terror organization in Lebanon, Hezbollah, following recurrent terror attacks against the state's security forces.In a statement issued during its meeting on Tuesday, the Bahraini parliament demanded Iran and Hezbollah "cease their hostilities against Arab states in general and the Gulf Cooperation Council in particular."The parliament lashed out at Iran and Hezbollah, accusing them of "waging terror attacks against local security forces to serve their foreign agenda, destabilize Bahrain and endanger security in the country."The parliament's statement followed a statement released by Bahrain's Defense Forces, denouncing a terror attack that took place earlier on Tuesday in the northern village of Karbabad. The operation targeted the security forces that safeguarded the village, killing one policeman and injuring two others. The Defense Forces' announced that they are highly prepared to deal with the terrorist organizations that target "police and security forces." In its statement, the parliament backed the Defense Forces, saying that it "fully supports the brave historic stance of the armed forces and the measures they take to protect the state."However, it criticized the efforts which have been made to stop terror attacks, declaring that they "do not correlate with the scope of the terror operations that have taken place and the threat posed to Bahrain."According to the parliament, "The time has come to hit these terrorists with an iron fist and confront them decisively, in order to deter anyone who aims to destabilize the state."The parliamentary outcry against Iran comes amid severe sectarian, diplomatic clashes that have been taking place between the states since October, when Bahrain recalled its ambassador to Iran, after discovering a bomb-making factory which it said was established by the Iranian Revolutionary Guards. In March, a Revolutionary Guards commander demanded that Iran annex Bahrain, while in the beginning of April, Bahraini Foreign Minister stated that Iran presents a bigger threat to Gulf States than Israel.