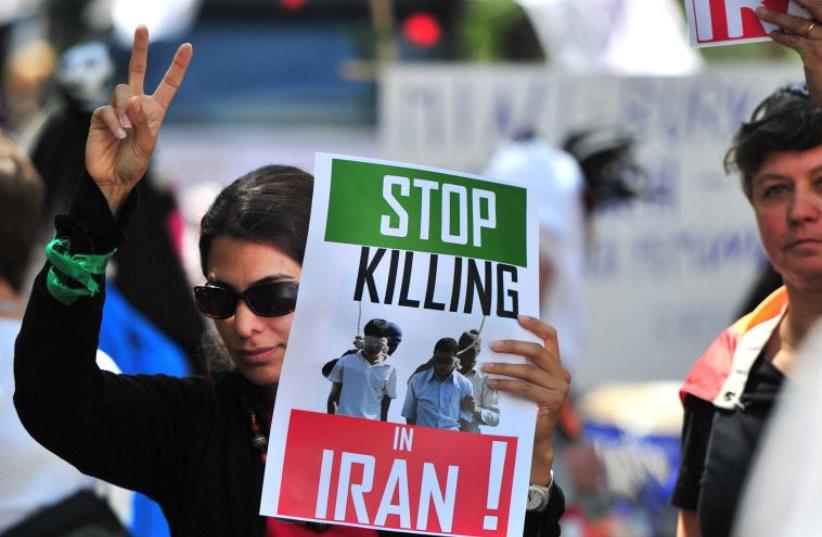 A demonstration against Iran's violation of gay rights during the Christopher Street Day (CSD) gay pride parade in Berlin [File]
(photo credit: JOHANNES EISELE/AFP)
Advertisement
BERLIN -- Iran’s regime executed a gay adolescent in July - the first confirmed execution of someone convicted as a juvenile in the Islamic Republic in 2016 - Amnesty International reported this week.Hassan Afshar, 19, was hanged in Arak Prison in Iran's Markazi Province on July 18, after he was convicted of  "forced male-to-male anal intercourse" (‘lavat-e be onf’) in early 2015, the NGO said in a statement Tuesday. Stefan Schaden, a LGBT rights activist and spokesman for the European 'STOP THE BOMB' campaign, told The Jerusalem Post on Thursday, “Consensual homosexual conduct remains illegal under Iran’s Sharia law and is punished with public flogging or even execution. While the Islamic State throws gays from rooftops, the Islamic Republic [of Iran] hangs them.” Amnesty said the Iranian authorities received a complaint accusing Afshar and two other adolescents of forcing a teenage boy to have sex. Afshar, who  was arrested in December, 2014,  said that the same-sex relations were consensual and the accuser had freely engaged in prior homosexual relations. “Iran has proved that its sickening enthusiasm for putting juveniles to death, in contravention of international law, knows no bounds," said Magdalena Mughrabi, Deputy Middle East and North Africa Programme Director at Amnesty International.  She added that Hassan Afshar was a 17-year-old high school student when he was arrested. "He had no access to a lawyer and the judiciary rushed through the investigation and prosecution, convicting and sentencing him to death within two months of his arrest as though they could not execute him quickly enough,” Mughrabi stressed. Volker Beck, a gay German Green Party MP and international activist to stop the persecution of LGBTs, told the Post, “Iran is a signatory to a UN treaty that does not completely ban the death penalty but limits capital punishment to severe crimes and outlaws the execution of juveniles. “Beck said “In the court case Toonen vs Australia,  Geneva [United Nations Human Rights Committee] determined that the criminal prosecution of Homosexuality violates the International Covenant on Civil and Political Rights. Iran violates, with this execution,in three ways, its human rights obligations. Our foreign policy should strongly address the human rights situations in Iran and Saudi Arabia” The Kingdom of Saudi Arabia like Iran prescribes the death penalty for gays. Schaden said, “Iran’s Islamist regime proves again with its actions that it is anything but ‘moderate’. While the US administration and the European Union promote trade with Iran as if they were the regime’s chamber of commerce, they willingly ignore the latest mass executions, arrest waves, the financing of terror and the horrible human rights situation. Iran’s barbaric henchmen promote and enact deadly homophobia and force homosexuals to flee the country. “ According to a 2008 British Wikileaks dispatch, Iran executed between 4,000 to 6,000 gays and lesbians between the start of the Islamic Revolution in 1979 to 2008. Iran frequently executes gay men for same-sex relations and frames the men for rape charges to justify its Islamic law application of lethal  homophobia.Magdalena Mughrabi, from Amnesty, said  “In a cruel stroke of irony, officials did not inform Hassan Afshar of his death sentence for around seven months while he was held in a juvenile detention facility because they did not want to cause him distress – and yet astonishingly were still prepared to execute him. With this execution, Iranian authorities have demonstrated once again their callous disregard for human rights.”