The poll also focuses on whether Zionist Union should become part of the government coalition. 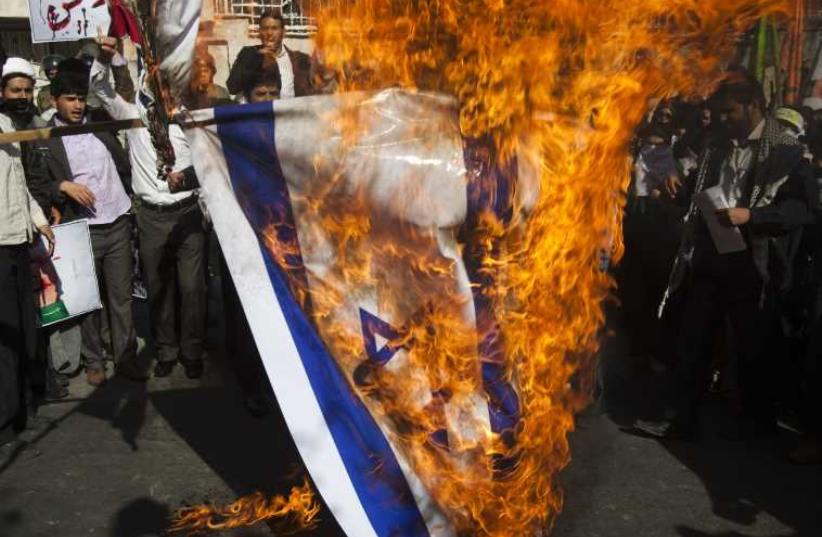 Iranian students burn Israeli flag.
(photo credit: REUTERS)
Advertisement
An overwhelming majority of Jewish Israelis believes the deal reached with Iran by the world’s leading nations on Tuesday endangers Israel and brings Iran closer to acquiring a military nuclear ability, according to a Capital Politics poll taken for The Jerusalem Post and its Hebrew sister publication, Maariv Hashavua.The poll was taken among participants in an online panel of 501 respondents representing a statistical sample of the adult Jewish population in Israel. The poll, which was taken Wednesday, has a 4.2 percent margin of error.The percentage saying that the deal would endanger Israel was 78%. Fifteen percent said it does endanger Israel and 7% did not know.Seventy-one percent said the deal would bring Iran closer to a military nuclear capability. Twelve percent said it would distance Iran and 17% did not know.When asked whether they support an Israeli military strike on Iran if it would be necessary to prevent the Islamic state from getting nuclear weapons, 47% said yes, 35% said no, and 18% did not know.Fifty-one percent said Prime Minister Benjamin Netanyahu should use all possible tools to persuade Congress to vote against the deal, 38% said the prime minister should instead try to reach understandings with US President Barack Obama about its implementation, and 11% did not know.Asked whether the Zionist Union should join a unity government following the Iran deal, 52% of respondents and 84% of the Zionist Union voters among them said no, 27% of respondents and 10% of Zionist Union voters said yes, and 21% of respondents and 6% of Zionist Union voters said they did not know.Zionist Union co-leader Tzipi Livni denied reports Thursday that the faction was in talks to join Netanyahu’s governing coalition.“There are absolutely no talks for the Zionist Union to join the Netanyahu government. There is a gaping chasm between us,” Livni said in response to a report in Haaretz that President Reuven Rivlin is serving as a mediator between the two sides.Livni told Israel Radio that she had asked her Zionist Union co-leader Isaac Herzog if there was truth to claims by Meretz leader Zehava Gal-On that, following the Iranian nuclear deal, the Zionist Union would be joining the coalition within two weeks. “He said that the issue had not even come up in the meeting he had Tuesday with Netanyahu,” Livni said.Herzog has joined Netanyahu in calling the Iran agreement a “bad deal” in recent days and vowed to do his part to prevent Tehran from obtaining nuclear weapons.Zionist Union MK Shelly Yacimovich told Army Radio Thursday that she is against joining the coalition. She criticized Herzog for his backing of Netanyahu’s narrative on the Iran deal.“I view with a certain amount of criticism the absolute backing of Prime Minister Benjamin Netanyahu,” Yacimovich said. “The one who brought us to the point of such an unprecedented headon confrontation, is Netanyahu,” she added.Daniel Clinton contributed to this report.