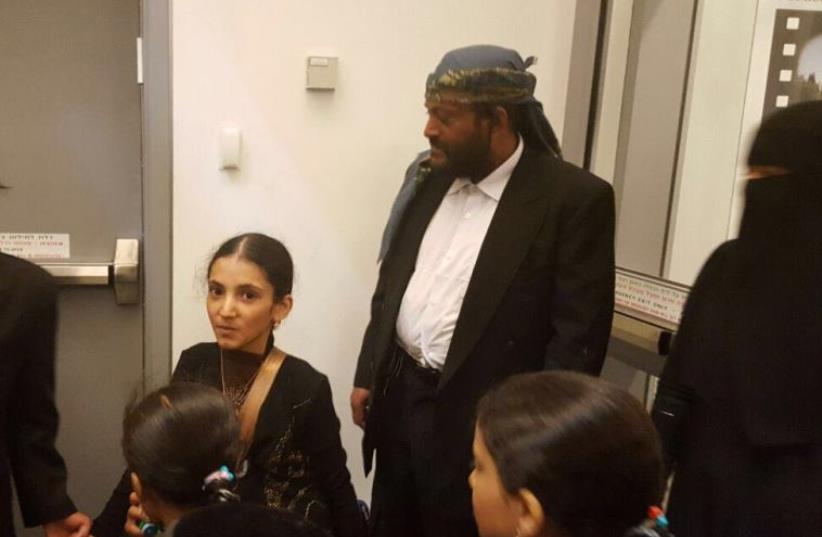 Final group of Yemenite Jewish immigrants arrives in Israel
(photo credit: ARIELLE DI-PORTO FOR THE JEWISH AGENCY FOR ISRAEL)
Advertisement
The arrival of a final group of Yemenite Jewish immigrants in Israel Monday morning aroused widespread criticism from Yemenite citizens on social media networks, claiming that the move was a result of a secret understanding between Israel and pro-Iran Houthi militias. The opponents to this "secret deal" between Israel and the Houthis launched a social media campaign defaming Houthis as traitors under the hashtag, "The Houthis are Israeli agents.On Monday morning a group of 19 Yemenite Jews that lived in the Houthi-ruled cities of Sana'a and Raida landed in Israel after being airlifted from Yemen in a secret mission reportedly administered by the Jewish Agency, in collaboration with the US State Department.Among the new immigrants was Rabbi Saliman Dahari, who brought with him a Torah scroll that is 500-600 years old.The social media activists who participated in the anti-Houthi campaign based their main claim according to which there is a secret alliance between Israel and the Houthis on an image of Dahari carrying a rifle with the writing "death to Israel" on it. Since this is a well-known Houthi slogan, these anti-Houthi activists deduced that the Jewish Rabbi was a fighter in the Houthi militias."Not only did the agents of the Zionist occupation collaborate with Israel and the United States in the covert operation to airlift Yemenite Jews to Israel, they also allowed these Jews to steal our heritage," a Yemenite activist wrote on his Twitter page, referring to the ancient Torah scroll the Rabbi brought with him."After Houthis ignited war in different provinces in Yemen under the slogan "Death to Israel," the truth about them is revealed," read another popular remark regarding the ostensible "Israel-Houthi collaboration."The official Twitter account of one of the well-known Yemenite daily newspapers, Yemen Now, went even further, claiming that "Houthis stipulated their collaboration with Israel on its support for them in international forums." The Iran-backed Shi'ite Houthi militias have been fighting Sunni Yemenites since January 2015, when the Houthi militias seized the presidential compound in Sana'a. In March 2015, Saudi Arabia began operation "Decisive Storm" to buttress the regime of Yemen's President Abd Rabu Mansour Hadi.