Obama: Deal with Palestinians not possible in coming year

US President tells Al-Arabiya that through trust building steps, "the the logic of a two-state solution will reassert itself." 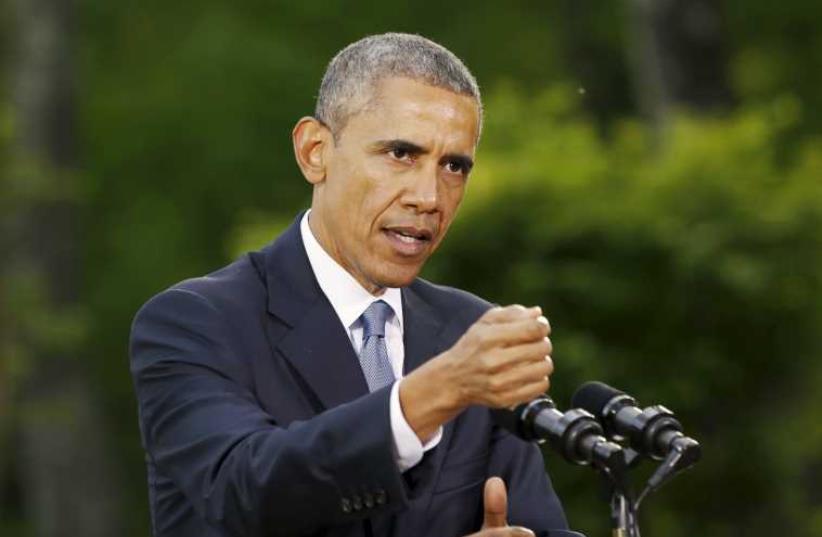 US President Barack Obama speaks during a news conference at Camp David in Maryland May 14, 2015
(photo credit: REUTERS)
Advertisement
In a lengthy interview with news outlet Al-Arabiya on a number of challenges facing the Middle East, US President Barack Obama was asked about the Israeli-Palestinian conflict and he did not express a great deal of optimism on the prospect of reaching a peace deal in the near future. "This is a very difficult challenge. On the one hand I am a strong supporter of Israel and the connection between the United States and Israel. Israel has legitimate security concerns. There is no doubt about it. And what is also true is that I am deeply committed to a Palestinian state," Obama said. The president recalled hearing of  "the heartbreaking stories from Gaza" and the sense he hears when speaking to Palestinian students in the West Bank "that their world is shut off because of their circumstances.""The only solution is a two state solution," Obama said. "What I think at this point realistically we can do, is to try to rebuild trust, not through a big overarching deal, which I don't think is probably possible in the next year given the make up of the Netanyahu government and the challenges of Abbas [PA President Mahmoud Abbas]. Obama called for relieving humanitarian suffering in Gaza and promoting job opportunities in the territories as ways to slowly build trust between the parties.  Through this trust building "the logic of a two-state solution will reassert itself," Obama said.“We worked very hard, but frankly, the politics inside of Israel and the politics among the Palestinians as well made it very difficult for each side to trust each other enough to make that leap.”Obama said he has told Israel that it could not remain a state that is both democratic and Jewish if it continues to have the conflict unresolved and that he has told the Palestinians that they need to recognize Israel if they are to have a state.On the Israeli-Palestinian conflict the politics of fear has been stronger than the politics of hope, he said.