Poll: Palestinians prefer suing Israel at the ICC rather than starting third intifada

Palestinian Center for Policy and Research also finds that majority of Palestinians believe Fatah-Hamas unity does not close door on talks.

By TOVAH LAZAROFF
JUNE 10, 2014 19:30
ICC 370
(photo credit: REUTERS)
Advertisement
Palestinians want to bring Israel before the International Criminal Court more than they want to fight them in the streets in an armed third intifada, according to a poll conducted by Khalil Shikaki of the Palestinian Center for Policy and Survey Research.Palestinians continue to support a two-state solution and do not believe that the newly unified Fatah-Hamas government is an obstacle to renewed negotiations, according to Shikaki’s data, which he presented at the 2014 Herzliya Conference on Tuesday.Israelis also believe it is possible to negotiate with the new Palestinian government, according to pollster Mina Tzemach, who spoke on the same panel as Shikaki. 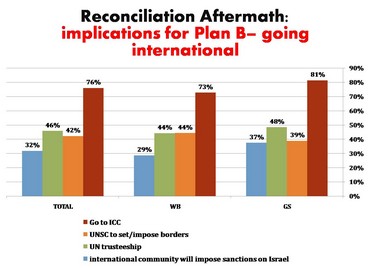 In the absence of talks, Israelis prefer annexing portions of the West Bank over unilaterally withdrawing from territory there, she said.Israeli public opinion is evenly divided on the question of freezing West Bank settlement- building, she added.Both polls are among the first data to measure Palestinian and Israeli public opinion on the changes in the peace process over the last two months.Shikaki extracted his data via face-to-face interviews of 1,270 Palestinians in the West Bank, Gaza and east Jerusalem between June 5 and June 7 – just days after the new unity government was sworn in.The poll had a 3-percent margin of error. 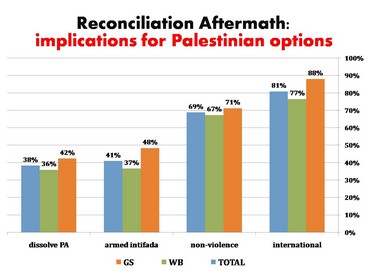 Tzemach, in turn, polled 500 Israelis over the phone between May 28 and May 29. Her work had a margin of error of 4.4% and was conducted for the IDC Herzliya’s Institute for Policy and Strategy.According to Shikaki’s data, Palestinians showed more support for unilateral actions than for negotiated ones. The poll highlighted that 76% of the interviewed Palestinians wanted to turn to the International Criminal Court, even if it led to the collapse of the Palestinian Authority. An even larger number, 81%, wanted their government to join international organizations, but 54% said they opposed any attempts by the United Nations Security Council to set the borders of a two-state solution.There was a slim majority support, 54%, for a two-state solution, even though 61% of those polled said they believed it was impractical.Fifty-eight percent of people from the West Bank supported a two-state solution, whereas only 47% of people from Gaza did.The majority of Palestinians, 59%, believed that having a unified Fatah-Hamas government did not preclude continued negotiations with Israel and that this new government should accept the four Quartet principles.These principles include recognition of Israel and a renunciation of violence.Similarly, a majority of those polled, 69%, said they supported nonviolent options with respect to Israel and the conflict, and 59% said they opposed an armed intifada.But while 62% of those polled said they supported dissolving the armed groups in Gaza, only 19% think it should happen now.Tzemach’s poll was more narrowly focused. It showed that 51% of Israelis opposed negotiating with Hamas and 45% were against holding talks with the new Fatah-Hamas government.A slim majority of Israelis, 51%, said they supported talks with the Palestinian unity government if it held to its promise to support the Quartet’s principles.With regard to freezing West Bank settlement activity, Israelis are fairly evenly divided, with 49% opposing it and 48% in favor, Tzemach said.A poll conducted in July 2010, during the 10-month moratorium on settler housing, found that 49% of Israelis believed the building freeze should be extended beyond its end date, she said.Her research from May also measured public opinion on some of the options being debated now that the peace talks have ended.Her data showed that the most popular course of action, with 38% support, was a return to negotiations. After that, 20% of the Israelis polled preferred Economy Minister Naftali Bennett’s plan to annex Area C of the West Bank.Another 20% supported the status quo. Only 7% favored a plan of annexing the settlement blocs and withdrawing from isolated settlements, as Finance Minister Yair Lapid proposed. A mere 3% said they wanted Israel to withdraw to the pre-1967 lines. 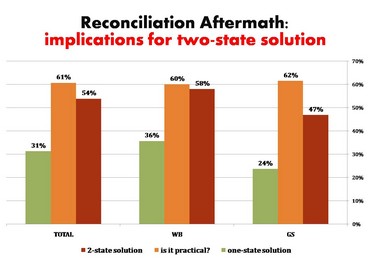