Saudi official warns Iran: Attack us at your own risk

"If they are preparing an army to invade us, we are not easily taken by someone who would make war on us," Prince Khaled al-Faisal warns. 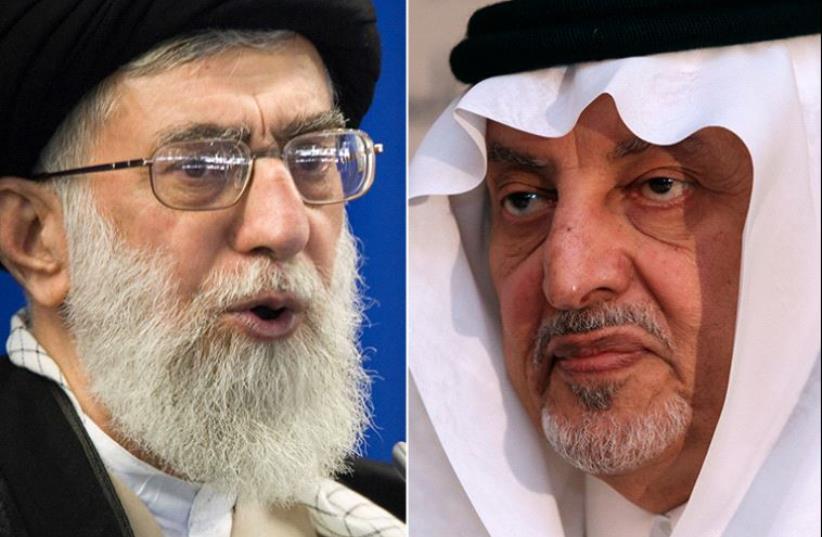 Khamenei and al-Faisal
(photo credit: REUTERS)
Advertisement
DUBAI - A senior Saudi official, responding to Iranian criticism of Riyadh's management of the haj pilgrimage, urged Iran to end what he called wrong attitudes towards Arabs and warned it against any use of force in its rivalry with the kingdom.Mecca province governor Prince Khaled al-Faisal, in remarks likely to be seen as a reference to Iran, added that the orderly conduct of the pilgrimage this year "is a response to all the lies and slanders made against the kingdom."The remarks carried by the official Saudi Press Agency (SPA) on Wednesday evening follow an escalating war of words between Shi'ite Muslim Iran and Sunni Saudi Arabia since a crush at the annual haj pilgrimage a year ago in which hundreds of pilgrims, many of them Iranians, died.SPA quoted Prince Khaled as telling journalists his message to the Iranian leadership was "I pray to God Almighty to guide them and to deter them from their transgression and their wrong attitudes toward their fellow Muslim among the Arabs in Iraq, Syria, Yemen and around the world"."But if they are preparing an army to invade us, we are not easily taken by someone who would make war on us.""When we desire, and with the help of God Almighty, we will deter every aggressor and will never relent in protecting this holy land and our dear country. No one can defile any part from our country if any one of us remains on the face of the earth."No top Iranian leader has called for war with Saudi Arabia, something neither country wants.But last year's haj disaster, and the execution in January of dissident Saudi Shi'ite cleric Nimr al-Nimr, triggered months of scathing Iranian criticism of the kingdom.Riyadh broke off relations with Tehran after its embassy there was attacked by Iranians protesting against Nimr's death. Iran's powerful Revolutionary Guards promised "harsh revenge" for Nimr's death.Iran blamed the 2015 haj disaster on Saudi incompetence, and Supreme Leader Ayatollah Ali Khamenei on Sept. 5 said some of the Iranians who died had been "murdered" by Saudi Arabia. He said Muslims should not let Saudi rulers escape responsibility for "crimes" he said they had committed in Arab conflicts.