God is testing the Jewish people in recent days, Ashkenazi chief rabbi says; encourages people to pray for the teens.

By JEREMY SHARON
JUNE 18, 2014 17:36
Rabbi Lau leading prayers in Hebron, June 18, 2014.
(photo credit: MARC ISRAEL SELLEM)
Chief Rabbi David Lau held a mass prayer service at the Cave of the Patriarchs in Hebron on Wednesday afternoon for the return of the three yeshiva students who were abducted on Thursday night.Lau also toured the Kiryat Arba settlement adjacent to Hebron and visited the Shavei Hebron Yeshiva, where one of the abducted teenagers, Eyal Yifrah, studies, as well as meeting with IDF soldiers involved in the operation to rescue the boys.“God accepts prayers when they come from the heart,” Lau told students at the Kiryat Menachem-Kiryat Arba Hevron Yeshiva, also part of his Wednesday visit.“I don’t know if the abducted boys are able to pray, but they are requesting that we pray for them from the bottom of our hearts.”The chief rabbi noted that members of minority communities in Israel, including Beduin and Druse, had contacted him to say that they were also praying for the return of the three boys, Gil- Ad Shaer and Naftali Fraenkel, both 16, and Eyal Yifrah, 19. 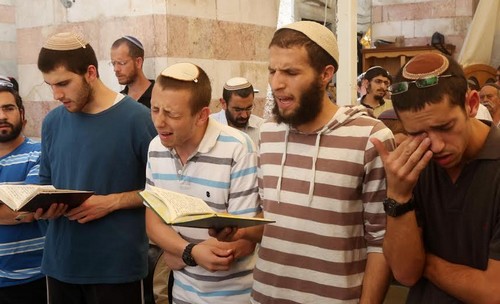 During the day, Lau met with members of the elite Duvdevan undercover unit of the IDF now operating in the Hebron region, where efforts are still being concentrated in the bid to rescue the kidnapped boys, blessing the soldiers involved in the operation.Speaking at the Shavei Hebron Yeshiva, Lau described the abductions as a spiritual challenge from God to become more united as a people.“God is testing the Jewish people in recent days and you students in this yeshiva are experiencing this especially hard, because you know him [Yifrah] personally, and spent entire days with him studying Torah and praying,” the rabbi said.“It is incumbent upon us to say to God that we are standing up to His challenge, but at the same time we request ‘do not lay your hand upon the boy,’ ” he continued, in reference to the Biblical passage when Abraham was instructed by an angel not to sacrifice his son Isaac.
Subscribe for our daily newsletter