By YAAKOV LAPPIN
Vandalized archaeological site 311
(photo credit: Israel Antiquities Authority)
Advertisement
Vandals attacked and heavily damaged an Antiquities Authority site near Afula overnight Wednesday, destroying findings dating back to the First Temple era.“All the signs” pointed to a group of haredi activists as the main suspects, due to their opposition to what they describe as the desecration of graves, Dror Barshad, an archeologist for the authority’s northern district, told The Jerusalem Post.RELATED:Herod began building Western Wall, but didn't finish it“They rioted at another archeological site nearby, at Yakuk,” Barshad said. “With no legal authority, they take the law into their own hands and try to dictate where roads and tunnels can or can’t be built.”The same group vandalized a second archeological site near the Kinneret last month, he said.“Our ability to continue to research the area that was vandalized overnight is over.We were mapping out the whole area and had findings from 1000 BCE to 600 BCE,” he said. 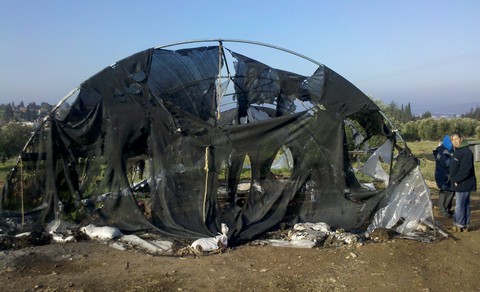 The Antiquities Authority was digging at the site because a road is being paved in the area. Such salvage digs are designed to preserve ancient findings for future generations, Barshad said.“The whole ancient world passed through Israel. As an authority, we strike a balance between development of homes and roads, and safeguarding antiquities,” he explained.“I expect the Israel Police to carry out a full investigation and for the courts to finally decide that the law is what guides us here,” he said.Barshad said archeologists were frustrated by the fact that precious findings are increasingly being destroyed.“The damage was extensive,” Israel Police spokesman Micky Rosenfeld said. “We have removed evidence from the scene and are examining a number of possible motives for the attack,” he added.Intelligence officers from the police’s northern district have also entered the investigation, Rosenfeld said.The container housed pottery, large water containers, work tools and cooking utensils.