Israeli resident reveals ancient sunken artifacts, including pottery from the Biblical Period, stored in her basement.

The Antiquities Authority announced on Wednesday the staggering find of a large number of ancient pottery pieces, fully intact and safely stored... in a basement.

It all began with a phone call to the authority: “In my basement, there are full boxes of ancient vases and pottery that a member of my family, a fisherman, left before he died... I want to pass the pottery on to the state, and I want my grandchildren to know where to see them in the future.”Soon after the phone call, two archeologists from the Antiquities arrived at the home of the caller, Osnat Lester, in the Galilee town of Poriya Illit.They were amazed to see the extent of the treasure: neatly wrapped in cloth and stacked in boxes were a large number of pottery vessels, clearly ancient and rare. Most of the pieces were fully intact, and the rest were in large fragments.Lester’s fisherman relative had “fished” the pottery out of the Mediterranean Sea. The surfaces of the vases were encrusted with seashells and other ocean sediments, including the occasional fossil.This is not the first find of its type – according to Antiquities Authority spokeswoman Yoli Shwartz, there is much to be found in the depths of the ocean.Thousands of years ago, Israel’s shores were a focal point for trade channels.Located smack in the middle between the ancient dynasties in Egypt and Lebanon, many maritime merchants docked and traded, and some sunk by the shore, leaving a trail of artifacts on the ocean floor. 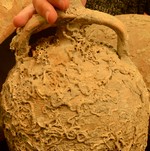 The pieces in Lester’s home, according to the archeologists, are from a wide range of time periods, the cargo of many sunken ships from ancient times, and once carried oils, food and sometimes wine.

One beautiful vase with a tall frame and high handles was immediately recognized as being from the time of the Biblical period, about 3,000 years ago. Another remarkable piece was reported to be from the Roman period, some 2,000 years ago, and a round urn was dated to the Byzantine period, about 1,500 years ago.To the expert eye, the cargo of a sunken ship is a message from the past. Just from studying the artifacts, an archeologist can conclude the type of ship, the time period, what the merchandise included and more.“In the future we will be able to display the pottery to the enjoyment of the public in museums, instead of just having them locked up in a basement somewhere,” said Amir Ganor, head of the Antiquities Authority’s Robbery Prevention Unit.The authority thanked Lester for being a Good Samaritan and revealing the treasure to the people of Israel. Thanks to her honesty, the authority can investigate the pieces and perhaps shed some new light on the mysteries of the ancient Land of Israel.
Advertisement
Hot Opinion