Horovitz steps down, Linde taking over as JPost editor

By JERUSALEM POST STAFF
Steve Linde 311
(photo credit: Marc Israel Sellem)
Advertisement
David Horovitz, editor-in-chief of The Jerusalem Post since October 2004, is stepping down. Steve Linde, the paper’s veteran managing editor, is to take over at the helm after a short transition period.“After almost seven years in this challenging, fulfilling and fascinating job, I feel it is time to move on,” said Horovitz, 48.“I’m very much looking forward to taking on the challenge as editor-in-chief,” said Linde, 51. “After 14 years at the paper, I have grown to love what it represents and aim to expand its key role as Israel’s best-read English newspaper and the world’s premier Jewish journalistic brand.” 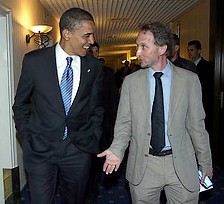 File photo: Horovitz and Obama (Ariel Jerozolimski)
Said the Post’s publisher: “We are very sorry that David is leaving. He has been an outstanding editor, and the Post greatly appreciates the passion, integrity and professionalism he has brought to the job. We wish him all the best for the future.”Said Horovitz: “I am immensely proud of what is achieved by the wonderful staff here at the Post on a daily basis.” He highlighted “the enhancing of The Jerusalem Post’s reputation as a fair-minded, inclusive publication.”That stellar reputation, he said, explains why the Post “has established itself as the most-read and the most reliable English-language source of news from Israel, in print and online.”Horovitz praised the Post for reporting the news “accurately and fair-mindedly,” and for carrying “a diverse range of opinion pieces regarding how best to safeguard the wellbeing of Israel and the global Jewish nation.“I hope that by giving readers access to the wide, sometimes conflicting range of ideas people have for ensuring a secure, vibrant future for Israel, we have also helped encourage greater internal Jewish tolerance,” Horovitz said. “And I know that my successor in this extraordinary job, Steve Linde, is committed to that same outlook.”The Post’s publisher welcomed Linde as the Post’s next editor-in-chief: “Steve Linde is David’s natural successor, and we know that he will maintain all that is best about the paper while bringing his own wide experience, commitment and creativity to the role.”“We have a wonderful team here, and I’m proud to have the opportunity to take The Jerusalem Post forward with them,” said Linde.Horovitz said he was “delighted that Steve is taking over from me. He’s the best person for the job.”Horovitz said he wished his colleagues in all departments at the paper, the Post’s ownership and The Jerusalem Post itself the very best for the future. “It has been a privilege to work here,” he said.