By MELANIE LIDMAN
JULY 2, 2012 15:53
IDF soldiers view Old City of J'lem from Mt. of Olives 37
(photo credit: Darren Whiteside / Reuters)
Advertisement
The Interior Ministry gave its initial approval for the construction of facilities for a military college in east Jerusalem on Monday, which will be located on the Mount of Olives.The 42,000-square-meter structure of the National Defense College is planned for an open area between the Beit Orot Yeshiva and Hebrew University’s Mount Scopus campus, within a few hundred meters of the Old City and with a commanding view of the Temple Mount.Left-wing groups slammed the approval.“This is a crazy plan to build a military college in one of the most sensitive areas under dispute,” said Hagit Ofran, who oversees Peace Now’s Settlement Watch division.“This will inevitably harm the status of the State of Israel and the IDF in the world... People in the world respect our army as part of our sovereignty, but to put this in a very sensitive area, you’re inviting them to boycott the Israeli army.”The area was originally earmarked for the new Supreme Court, which was eventually built in the Government Quarter near downtown Jerusalem.Jerusalem Mayor Nir Barkat has touted the college in the past as a way to attract young, working people to the city.Interior Ministry spokeswoman Efrat Orbach echoed Barkat’s sentiment, adding that the location was chosen due to its proximity to the Hebrew University, allowing soldiers to take advantage of university courses during their studies. 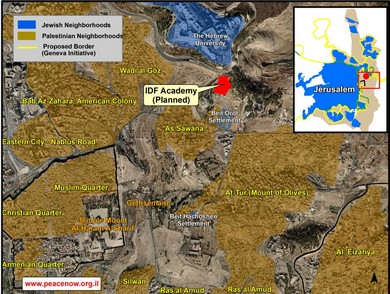 Click on photo to enlargeThe project will be built partially above ground and partially below ground. The building “presented modest and appropriate aspects for the view of the area as well as met the pragmatic needs of the college,” said Dalit Zilber, the chairwoman of the Jerusalem District Planning and Building Committee under the auspices of the Interior Ministry.The National Defense College is currently located at the Glilot junction in Herzliya, next to the central military intelligence base, though there has been talk of moving to Jerusalem for the past several years.On Monday, the Interior Ministry gave its initial approval to the project, which will now be open for public opposition before receiving final approval from the ministry. The approval process could take as little as a year, but will most likely take a number of years before construction can start.A Defense Ministry spokeswoman said that it was decided to move the National Defense College in order to free up land for housing in the Gush Dan region, as well as an ideological push to have national institutions located in Jerusalem and economically depressed areas of the periphery.The college will bring thousands of commanders to Jerusalem and will also provide hundreds of jobs, she added.The spokeswoman denied claims that the land in question is contested, noting that the land had already been earmarked for some kind of national institution for years and it is all located within the municipal boundaries of Jerusalem.The Ir Amim organization pointed out that the military college is situated in between contested national parks, creating a swath of Israeli buildings and open areas.“It’s amazing to discover that especially in an area that suffers from such a large shortage of housing and lack of development, the authorities believe it is the right thing to quickly advance a project to create an army building or national park that does not benefit the welfare of the residents,” said Yehudit Oppenheimer, the director of Ir Amim.The area for the new military college is located on parts of the Arab neighborhoods of A-Suwane and a- Tur. The area was privately owned Palestinian land until the Israel Lands Authority seized it in January 1968, according to Jerusalem expert Daniel Seidemann. The plan to move the Supreme Court there dates back to 1969.Seidemann said that the location for the military college in this area is problematic because the college has many ties with foreign militaries, who will be wary of the political implications of the location.“I have received a number of phone calls from foreign governments saying, ‘What can you possibly be thinking? You are engaged in an act of self-ostracism,’” Seidemann said.
Advertisement
Subscribe for our daily newsletter