By BEN HARTMAN
Tel aviv budget protest banner 370
(photo credit: NIV ELIS)
Advertisement
Several thousand people marched around central Tel Aviv on Saturday night to protest the draft state budget presented last week by Finance Minister Yair Lapid.The demonstrators jeered Lapid, calling him a puppet of the captains of Israeli industry, and accusing him of betraying the middle-class Israelis who voted him into power. In addition to the chants from the social justice protests of the summer of 2011, the crowd repeatedly chanted “There’s no future with Lapid and Bibi,” in a play on the name of Lapid’s Yesh Atid (“There is a future”) party. 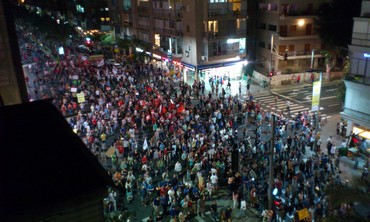 The protest, which was hyped as being the relaunch of the social justice protests of two summers ago, was held at the same time as smaller ones in cities including Jerusalem on King George Street, Haifa and Ashdod.“Instead of a murderous budget that will raise taxes and the income tax paid by workers, the self-employed housewives, and the elderly – the people demand a stop to the free for all for tycoons, to give us back our natural resources and to stop pouring money into isolated settlements,” organizers said in a Facebook event page advertising the protest titled “To the streets! Take from the tycoons, not the people!” Daphni Leef, the Tel Aviv woman who launched the 2011 protests, said at the beginning of the march that Lapid should “take from those who have and not from those who don’t.”When asked if the protests were coming back, Leef said, “It’s already back, we’re here in the street. Where it goes depends on what he [Lapid] does. I just hope it doesn’t become violent.”Holding a self-painted poster of Prime Minister Binyamin Netanyahu together with Lapid under the words “The old way is still in power,” 31-year-old Lior Tzur of Tel Aviv said, “Lapid sold us all an illusion that he’ll change things and help the middle class, when really he’s just going to continue the same policies of money and power that existed before.”One protester, 30-year-old Meretz voter and Beershebanative Yuval Bar, held a sign that read: “Where’s the money? In Yitzhar, you idiot!” a reference to the West Bank settlement near Nablus.While the protests two years ago tried to avoid highlighting the money spent on the settlements, Bar said that “instead of investing billions over the Green Line in places we know Israel won’t keep, we need to invest it here in education, health and welfare, things like this.” 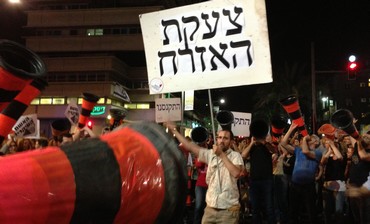 The protest march cut an ambitious path around central Tel Aviv, starting at the square outside Habimah national theater, where the protests of 2011 began, and turning down Ibn Gvirol Street to Hanevi’im, then to King George and Allenby streets and finally back up Rothschild Boulevard to Habimah. There did not seem to be as big a police and Border Police presence as at similar social justice protests in Tel Aviv in the past.Though this was the largest social issues protest in Tel Aviv of late, attendance was a small fraction of those who took part in demonstrations in the city in the summer of 2011, in particular the so-called “March of the Million” in September of that year, during which around 300,000 Israelis gathered at Hamedina Square.Also on Saturday night, around 300 people protested outside Energy and Water Minister Minister Silvan Shalom’s home in Ramat Gan against a plan to export Israeli natural gas.The crowd in Ramat Gan began to clash with police at one point, and two protesters were arrested. The protesters also managed to temporarily block nearby Jabotinsky Street, a major thoroughfare. 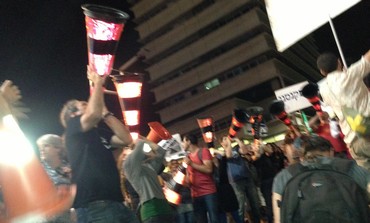