Blind Israelis march from Auschwitz and Birkenau with their guide dogs

A 28-minute documentary film, “Blind Love,” recounts a trip in 2013 to Poland of a delegation of six blind Israelis who lead the viewer on a different kind of journey. 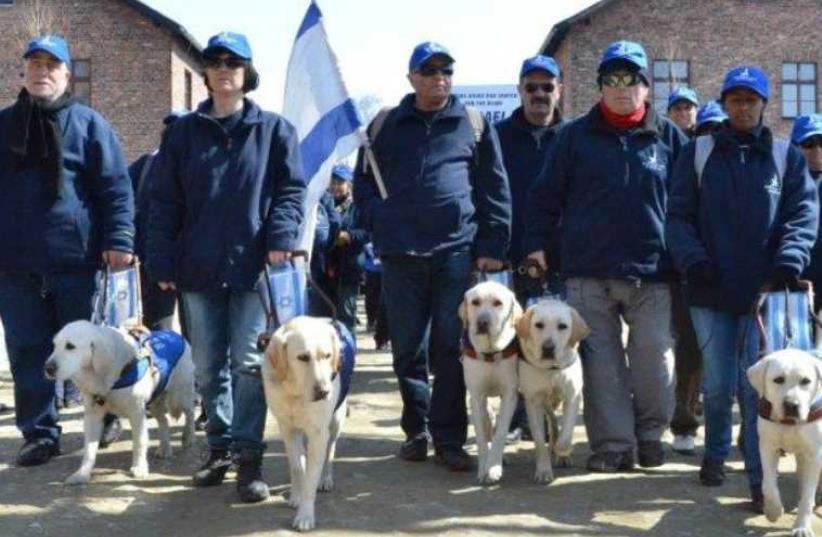 Blind Israeli participants and their guide dogs leaving the gates of Auschwitz on the March of the Living
(photo credit: ELI BEN BOHER)
IT WAS in the Majdanek Concentration Camp that Liron Artzi, a 30-year-old blind attorney from Tel Aviv, lost control and broke down in tears.She was touring Jewish sites in Poland with a group of six blind Israelis and their guide dogs to take part in the annual March of the Living.The cold sliced right through her coat. The tour guide’s description of the scene – a large room with rows of exposed water pipes and shower heads on the ceiling, adjacent to the Majdanek gas chambers – sliced through her heart.
Blind Israelis march from Auschwitz and Birkenau with their guide dogs
The tears ran down Artzi’s face and would not stop. From a place of profound grief she cried silently without uttering a sound. Partially hidden by a dark hood against the bitter cold, her face froze in a grimace that bared her teeth and could have been mistaken for a smile were it not for the persistent flow of tears.She reached down for her guide dog, Petel, a Labrador mixed with Golden Retriever, who with keen canine intuition recognized her need for comfort. Petel responded by licking Artzi’s tears, the warm, coarse tongue sweeping Artzi’s face, her nose red from the cold and her open, sightless eyes.The moment was captured in a 28-minute documentary film, “Blind Love,” recounting the trip in 2013 to Poland of a delegation of six blind Israelis who lead the viewer on a different kind of journey. In the Jewish cemetery in Warsaw, a blind woman touches an old gravestone carved lovingly many years before. Her hands caress every crevice, each Hebrew letter, reading the stone with her fingertips as if it were a page of Braille. It makes one think of the last time someone touched that marker, when the Jewish dead in Warsaw had living relatives to visit their graves.“Sometimes one picture can express more than a thousand words,” says Dr. Shmuel Rosenman, chairman of the International March of the Living, now in its 27th year.This is the first film ever made on the subject, according to the film’s producer, Eli Rubenstein, who is also head of the March of Living in Canada.The trip was sponsored by The Israel Guide Dog Center for the Blind, the only such training facility in the Middle East. The non-profit center has so far given for free more than 500 guide dogs and there is a long waiting list.“The film will make an excellent teaching tool in schools about how blind people interact with their world, about their relationship with their guide dogs, and the importance of building a society where everyone is cared for and cherished – young and old, strong and weak, able and disabled,” says Rubenstein in a telephone interview.“As the title of the film suggests, we strive for a world filled with blind love, rather than blind hate. What is the worst possible place in the world?” he asks and answers. “I would say it is a former gas chamber in Poland. I can’t think of a worse place in the world that symbolizes the greatest evil and blind hatred. It is the moment when we see a young woman breaking down and her dog licking her tears in a beautiful example of blind love in a place of such evil.”Artzi recalls the moment in an interview in her well-appointed apartment in Tel Aviv.“Petel understood what was going on. It was like she was telling me ‘I am here with you in every moment.’ It was a powerful experience.I didn’t have any family with me and my dog was licking my eyes where the tears were coming from.”Artzi, who was born premature, lost her eyesight due to an overdose of oxygen she was given at birth. Her handicap did not stop her from enlisting in the IDF, where she worked with computers and was honored as one of 100 outstanding soldiers. She completed her law degree and works in the legal department of the municipality of Tel Aviv.A concentration camp is perhaps one of the few places on earth where the ability to see might not be an advantage, she says. “I admit that not having the ability to see saved me from sights that are not easy.”It was not lost on the members of the delegation that Jewish people with disabilities had zero chance of survival during the Nazi regime. “The first selection was for those who were able to work. Those who were not were sent directly to be killed. The fate of people who were disabled was sealed immediately,” says Amir Haskel, the group’s tour guide to Poland.“It was strange that during the entire week it was cold, snow and rain, and on the last day when we took part in the March of the Living, it was the only day that the sun was shining,” says Artzi. “It was the peak of the trip because it showed the entire world that a person with disabilities can be just like a regular person, the exact opposite of what the Nazis wanted to do to the disabled. The chances of survival were very small for a regular Jewish person, but the chance of survival for a disabled Jewish person was nonexistent.” 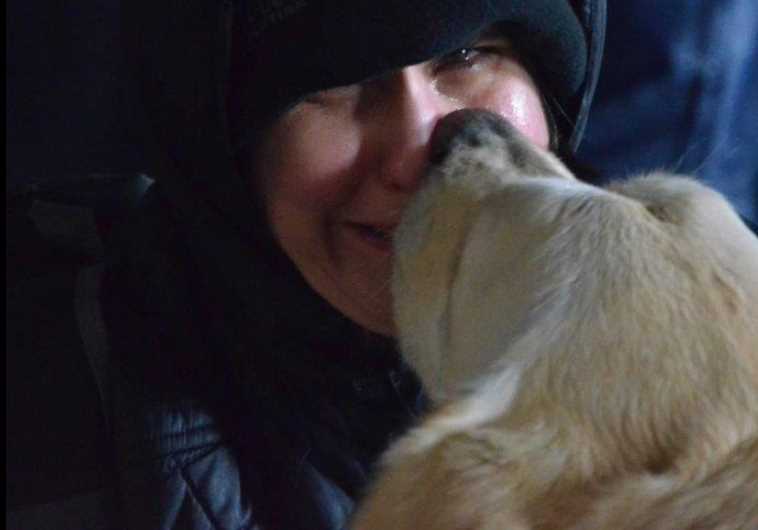 Liron Artzi, a blind attorney from Tel Aviv, is comforted by her guide dog Petel after breaking down in tears at the Majdanek Concentration Camp (Photo: Eli Ben Boher)
It is estimated that 200,000 disabled Germans were murdered by the Nazis in the “T-4” or “euthanasia” program in Germany, which later became the model for the mass murder of Jews and others. The program served as a training ground for SS members who later manned the concentration camps.It was also not lost on the participants as they made the 3-kilometer journey between Auschwitz and Birkenau that the Nazis used dogs as weapons to intimidate, maim and kill, and here they were, marching proudly with their guide dogs that are trained to be gentle and loving to the very people the Nazis set out to destroy.David Shentow, a Holocaust survivor, was touched by the sight of Jewish blind people marching in Poland with their guide dogs. In the film he recounts his arrival in 1942 in Auschwitz as a 17-year-old, to be greeted on the platform by SS guards and their German Shepherds.The Jews were told to leave the luggage on the train. One man standing beside Shentow politely asked an SS officer if he could retrieve a photo from his luggage.“The SS lost his temper and let his dog loose. The dog flew in the air straight to the man’s neck. As the man stopped moving I thought, ‘My God. That man is dead.’ This all happened in the first 10 or 15 minutes, and I knew I was in hell.”Another Holocaust survivor, Max Glauben, wanted to have his photo taken with the Israeli delegation.“I am touched to see the same animals that were used by the Nazis to kill and maim us are now helping us,” he says in the film.At the ceremony in Birkenau, Moti Levy, a 59-year-old computer scientist who was blinded in both eyes and lost his left arm during an IDF training exercise in 1976, was chosen to light one of the six torches. His dog, Sammy, accompanied him. Levy’s father had grown up just a few kilometers away, in the town of Oswiecim.“I knew a lot about the Holocaust, but here I could experience with my hand, with my hearing and with the smells. In Auschwitz you can smell the basement and the stale smell of old things in the barracks where all the items are stored. In Majdanek I could feel the fence with the barbed wire. I touched things and I understood.We walked the same paths that they had walked.”Guiding the blind through Poland for five days proved to be a challenge for Haskel, an experienced tour guide in Poland for the past 10 years.“I had to describe each place in detail, size, colors, from what material things are made of and to give them every opportunity to feel things with their hands. This experience opened my eyes,” he says. “Since I needed to get into great detail, it made me see things I had never noticed before. There are places in Poland where there is nothing left, that even people with eyesight find it difficult to imagine what took place there.”One such place is a small clearing in the Lopuchowo woods, just four kilometers from the quaint little town of Tykocin, the home before the war of a 1,500-member Jewish community. On August 25, 1941, the Jews were rounded up by Nazi and local police and brought to the woods. The blind people enter the quiet wood, their dogs lead them through low-lying brush and around puddles accumulated from the constant rain. The killing field is fenced and draped with Israeli flags.“I could feel like those people who walked from the town to the forest,” says Levy. “You imagine how they walk here with their families, their children in their hands, the elderly trailing behind. I suppose they knew they were walking to their death.”The group sat in a circle with open umbrellas listening to Haskel tell the story. Their dogs lay down on the ground beside them. One of the participants read a passage from a text in Braille that Haskel had prepared ahead of time.“The murdered bodies were thrown into a pit. A cruel fate awaited the children as the Nazi commander sicced his dog at them and they were thrown into the pits while still alive. A small girl didn’t understand what was happening and out of her childish naiveté, while they threw her in the pit, she asked, ‘why are you throwing dirt in my eyes?’” The fingers of the blind woman pause on the page of Braille and her voice breaks.
Subscribe for our daily newsletter