Jerusalem believes by accepting deal it will get int'l legitimacy if Hamas continues rocket fire. 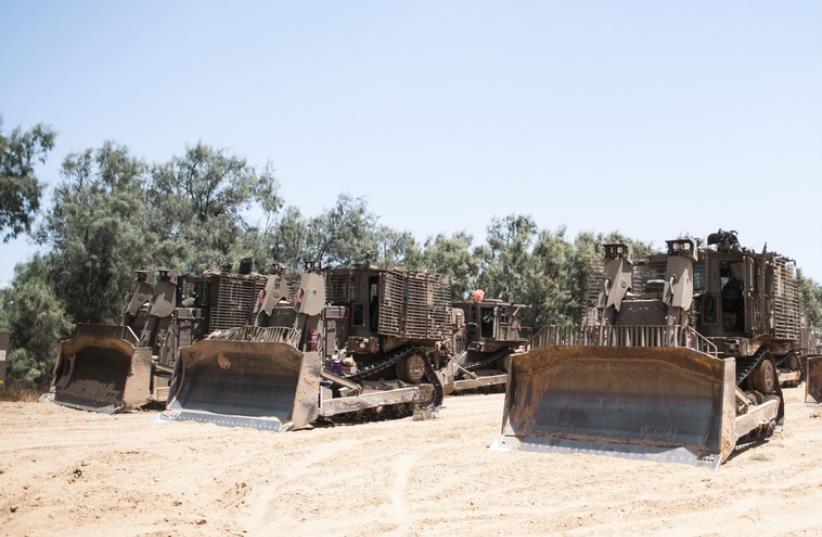 IDF near Gaza strip
(photo credit: IDF SPOKESMAN'S OFFICE)
Advertisement
The Security Cabinet Sunday morning accepted the Egyptian proposal for a ceasefire that, from Israel's perspective, went into effect at 9:00 am.It was not immediately clear whether Hamas accepted the ceasefire. Sami Abu Zuhri, a Hamas spokesman in Gaza, said earlier on Tuesday that the Islamist group had not received an official ceasefire proposal, and he repeated its position that demands it has made must be met before it lays down its weapons.Hamas's armed wing, the Kassam Brigades, rejected the reported text of the truce deal, saying: "Our battle with the enemy continues and will increase in ferocity and intensity."Diplomatic officials said the security cabinet's decision to halt the operation at this point will give Israel international legitimacy to continue with widespread military action if Hamas does not stop its rocket attacks.The eight-person forum also decided that if Hamas violates the ceasefire, Israel will act forcefully. Foreign Minister Avigdor Liberman and Economy Minister Naftali Bennett are believed to have voted against accepting the deal.The security cabinet also decided to launch an international campaign aimed at dismantling Hamas' rocket stockpiles, and closing the tunnels inside Gaza.The officials said the ceasefire does not include any conditions, and rolls back the situation to where it was before Operation Protective Edge was launched last week. For instance, there is no Israeli agreement to release Hamas members, freed in the Gilad Schalit exchange but re-arrested in the West Bank following the abduction and murder of the three Israeli teens last month.Israel also gave no commitment, as Hamas was demanding, regarding opening border crossings into the Gaza Strip.According to the ceasefire proposal, after some 48 hours representatives of both Israel and Hamas will go to Cairo and work out the details of what is expected to be a more long-term deal. Israeli officials stressed that the Israeli team, which has not yet been named, will speak only with the Egyptians, and not with Hamas.This is the same model of dialogue that was used to bring about the Schalit exchange in 2011, as well as the understandings that followed Operation Pillar of Defense in 2012.In a related development, US Secretary of State John Kerry, who was at one point expected to travel to Cairo on Tuesday from Vienna, is now not expected to do so.Nonetheless, a State Department official said Washington has been active in trying to bring an end to the violence and a return to the ceasefire agreement put into place in November 2012, after Operation Pillar of Defense. Since Saturday, the official said, Kerry has spoken with Prime Minister Binyamin Netanyahu four times, and with Egyptian Foreign Minister Shoukry twice. He also spoke twice with his Qatari counterpart, and once each with the foreign ministers of Turkey and Jordan.Reuters contributed to this report.