A useful wind from the East

Given the lack of initiative within the current leadership, joining another proactive power such as China to the existing dynamic could deal the jolt to the system we all need.

CHINESE FOREIGN Minister Wang Yi speaks during a news conference Beijing earlier this month.
(photo credit: REUTERS)
Advertisement
Very few things are as discouraging as being part of the peace camp in our region. Our situation can be likened to being in a boat stuck in a dead calm. Israel and the Palestinians are stuck on that vessel – and we can’t seem to agree about the right way to use the paddles, or decide toward where we want to row.Our rowers shrug off responsibility, deem the situation impossible and choose to accept the murky present as a long-term reality. Meanwhile, they stay in place, stagnant, as the water slowly corrodes the wood below with incitement, violence, distrust and fear. The truly frustrating, almost absurd thing about our metaphorical boat, is that the rowers have oars, a map and a compass showing them where to go.They even have a fairly good idea of where they both want to get to, and yet, they are standing still. Actually, most of the future agreement between Israel and the Palestinians has already been written. What we need in our boat is a good wind, and captains smart and bold enough put up sails to catch that wind– without fearing the vessel will tip over.This week I led an Israeli delegation to a peace conference in Beijing, initiated by the Chinese Foreign Ministry to promote the brokering a resolution with a similar group of Palestinians, to the Israeli-Palestinian conflict.The conference was supported personally by Chinese Foreign Minister Wang Yi. Within this meeting we were able to produce something that hasn’t been achieved by Israelis and Palestinians in far too long – a document detailing agreed-upon guiding principles for the promotion and establishment of peace, or at least, for the renewal of the negotiations. 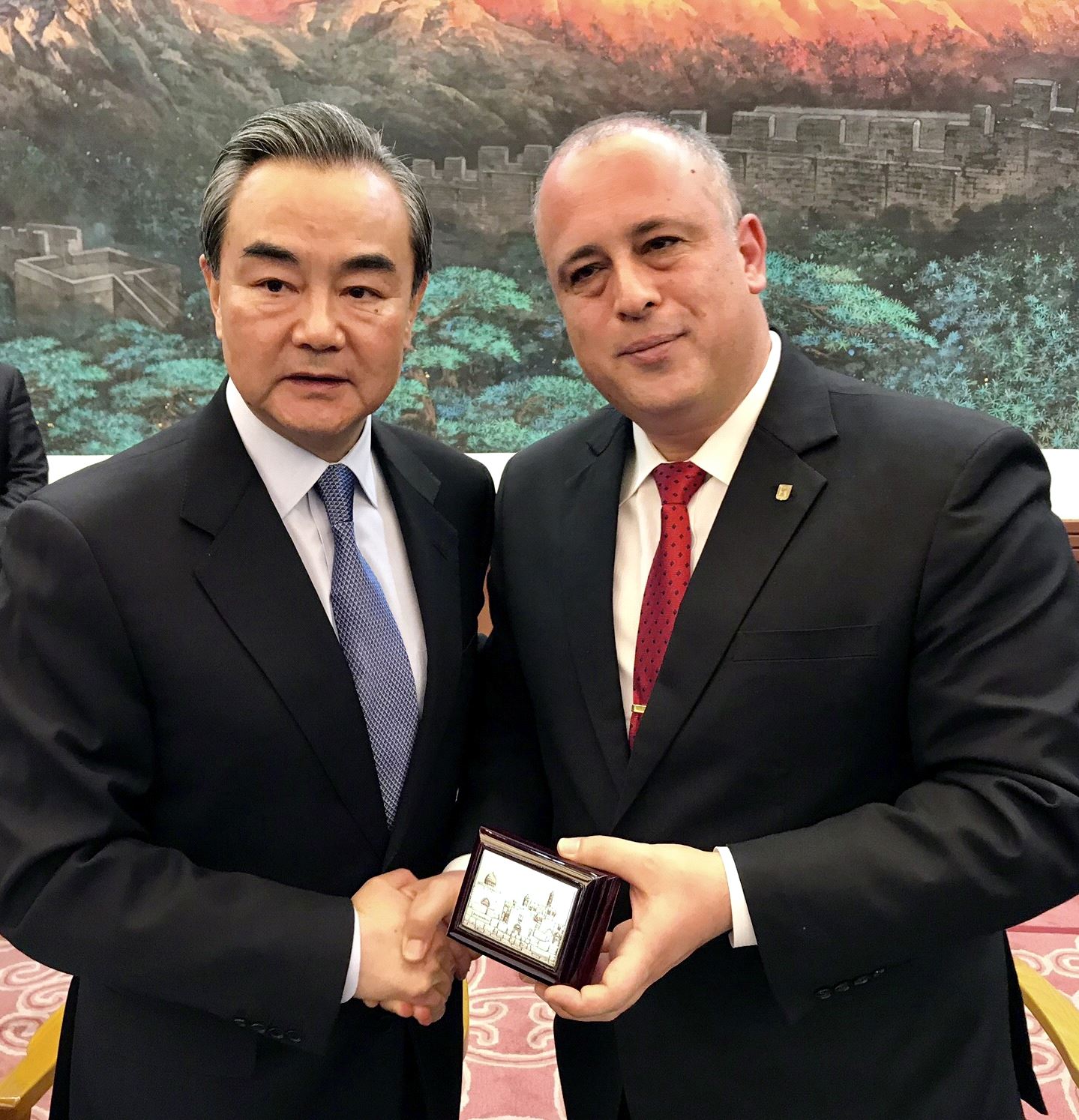 CHINESE FOREIGN Minister Wang Yi and KNESSET DEPUTY Speaker MK Hilik Bar, at their meeting in Beijing, December 2017. (Photo: Gal Raij)
The meeting was precedent-setting in many ways, as Beijing has decidedly not played a distinct role in our arena. Now, as the Chinese government has shown true commitment to assisting and promoting a solution that will end the Israeli-Palestinian conflict, new opportunities emerge.While China should not take the place of the United States as the prime negotiating power in the conflict, it has many great things to bring to the table – more wind to fill the sails of our boat, even if just at the Palestinian side. Any and all countries that wish to help promote peace in our region are welcome and should be encouraged to do so, especially a significant power like China.CHINA IS a growing world power, not only in economic resources, but also in influence and status. As Beijing’s interests expand past its traditional area of influence, eastern Asia, it becomes more involved in other areas – in more than ways than one. In the past few years, China has increased its investments in Central Asia, Africa and southern Europe, to establish a long-term infrastructure-development program.This Belt and Road Initiative will facilitate the exchange of goods, energy and commerce throughout China’s increasing area of influence. As China also makes economic and strategic progress in the Middle East, Israel should consider ways in which extending and deepening our friendship with Beijing could benefit us, in particular, through a peace process. So far, Syria has been the main venue of strategic development in which China has invested in our region. Allying with Russia, China has expressed more than once a willingness to back the rebuilding and development of Syria.As China becomes more prominent in our arena, it’s important, crucial even, that we don’t allow this strategic window to become exclusively tinted by those who are hostile toward Israel. For the future, the increasing presence of China in the area holds great potential for Israel – and for peace. The addition of China to the existing dynamics between Israel, the Palestinians, the United States and moderate Arab countries – which have been players in this field in the past – can readjust the equilibrium that enables the current stagnation.Beijing should not be in the Israeli-Palestinian peace process in place of the US, but by its side. For better or for worse, China is voicing a different tone than the American one. And a new voice in the conversation can offer a new push toward a return to negotiations. Furthermore, the nature of the relationship between China and moderate Arab nations can offer a new way in which to re-approach these critical players, whose importance I have highlighted in my peace plan.A recurring theme in our talks in Beijing was voiced by the Chinese: It has the resources, the capabilities and most important – the desire and interest – to invest in the resolution of the Israeli-Palestinian conflict. China has offered its help in laying the foundations on the ground for peace – within the written guiding principles upon which the Israelis, Palestinians and the Chinese have agreed. It has expressed willingness to offer tangible incentives for peace, and to invest in the Palestinian Authority and Israel. It is also willing to invest in civil society organizations on both sides, in order to build a positive momentum toward peace and create a breeding ground for cooperation – economic, cultural and political – between the sides. In the correct social and political climate and with the right set of incentives, we might also see positive and necessary economic development.PEACE WILL never come without the foundations of a prosperous economy and tangible cooperation. But neither will peace come from only development and economics. If there is one thing we are in dire need of, it is courageous leadership – on both sides – leaders who are willing to take the plunge and destroy the stagnation. We used to have these kind of leaders here. Where are they now?Given the lack of initiative within the current leadership, joining another proactive power such as China to the existing dynamic could deal the jolt to the system we all need. This is a new wind blowing from the East, and we had better open our sails and make the most of it. In the meantime, those of us who believe in peace and in the two-state solution – and who understand this is the only solution – should push those in power to make courageous decisions. Encourage bravery and discourage defeatist attitudes, violent extremism and any efforts to further derail the situation. Otherwise, our boat might just sink altogether. The author is a member of Knesset, deputy speaker of the Knesset and chair of the Knesset’s Two State Solution Caucus.