Azerbaijan under siege: A friend of Israel in need of our support

The associated massacres committed against Azerbaijanis have been classified as crimes against humanity. 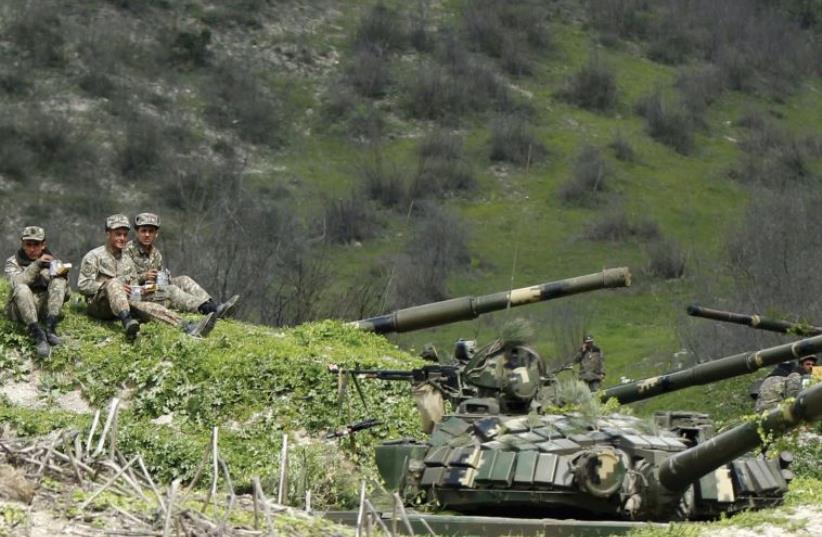 SERVICEMEN OF the army of Nagorno-Karabakh rest at their positions near the village of Mataghis, yesterday.
(photo credit: REUTERS)
Advertisement
I was very troubled by the images of a school hit by the rockets fired at innocent civilians by Armenian forces – those occupying a large swath of the Republic of Azerbaijan.Having just recently returned from Israel, I felt an unnerving sense of familiarity upon learning that Armenians had been firing at Azerbaijani residential neighborhoods, with the sole intent of murdering civilians.By all evidence and appearances, who they are shooting at seems not to matter to them.The current crisis is part of a longstanding conflict that began in the early 1990s, when Armenia brutally invaded and ethnically cleansed Azerbaijan’s Nagorno-Karabakh region and the surrounding seven districts, which together account for nearly 20 percent of sovereign Azerbaijani land. That same occupation continues to this day.The most recent escalation of hostilities by Armenia can certainly be regarded as a well-orchestrated public relations stunt to counteract the hugely successful trip by the president of Azerbaijan to the US last week. Embarrassed by the warm reception of President Ilham Aliyev in Washington, DC, as well as US Secretary of State John Kerry’s reiteration of strong US support for Azerbaijan’s territorial integrity, Armenia – the host of the second largest Russian military base in the world – decided to resort to armed provocations.These hostilities are indicative of the lack of respect Armenia has for not only for the lives of its own citizens, but also those of the innocent citizens and community members caught up in the broad campaign by Armenia and its lobby to discredit and injure Azerbaijan – the longstanding secular majority-Muslim ally to the United States, the State of Israel, and a leader in the international fight against terrorism and extremism. The crucial partner for the West in the region and the standalone ally for peace among Muslim nations, Azerbaijan faces a multi-faceted enemy, one that engages in actual and inhumane warfare on the ground while simultaneously terrorizing the media and the public with a different set of weapons.Revision and manipulation are tools used by terrorists the world over; the State of Israel is far too familiar with this problem. However, Armenian propagandists are unique in using the rise of Islamophobia to prevent the public from understanding what is a very straightforward issue. By constantly presenting the conflict as “a conflict between Christian Armenians and Muslim Azerbaijanis” – a terminology which was unfortunately also borrowed by some Western media outlets – Armenia is inserting a deceitful narrative in order to obtain Western public sympathy for something very wrong, namely unlawful occupation and brutal ethnic cleansing.And this all targeting a country known for multi-faith harmony and a longstanding history of peaceful coexistence between Muslims, Jews and Christians – and most importantly, a country Armenia is illegally occupying. While Armenia terrorizes Azerbaijan, its proponents use the mere fact that Azerbaijan is a majority- Muslim nation, however peaceful and democratic, to prevent a fearful and otherwise uninformed public from sympathizing with the actual victims, or from even knowing the difference.Many may not know it, but Azerbaijan was home to one of the world’s earliest Christian states, accepting Christianity as a state religion in 313 CE. Since then, Christianity has shaped the history of the country, and today around half a million Christians call Azerbaijan home and continue to live peacefully there with their Muslim and Jewish brothers and sisters.Despite over 20 years of Armenian invasion and offenses, the Azerbaijan capital city of Baku boasts an enviable Armenian-Christian cathedral, renovated and maintained with Azerbaijani government funds and support, as the country supports the independence and freedom of every religion represented by its people, and is known for it. Even the Armenian Catholicos Karekin II was amazed at the high standards of maintenance of the cathedral and its library of 5,000 ancient Armenian books, while visiting Baku in 2010 at the invitation of Azerbaijan.The Armenian occupation and campaign of terror against Azerbaijan’s Karabakh region is a classic case of a war motivated by radical ethno- nationalism and unlawful territorial claims; it has nothing to do with religion. The goal of portraying it as an inter-religious conflict is to generate fear in order to manipulate public discourse, with the intent of keeping the conversation far away from what is plain, simple and true.Again, the list of parallels to what supporters of Israel deal with in the world of a misinformed and mislead media are endless.This is not a fair fight; there are occupiers and the occupied, just as we distinguish between soldier and terrorist. We must demand our leadership take the only correct side in this conflict, and condemn terrorism and continue to support and applaud our allies. Heaven knows we need such friends now more than ever before and it’s safe to say we can’t afford to lose them, whether through bad diplomacy or by the shattering impact of brutal war.So as the Armenian army and its proxies continue to unload shells on Azerbaijani residential communities to this very hour, it’s a moral imperative that our leaders and the greater public are abundantly clear that Nagorno-Karabakh is an internationally recognized region of Azerbaijan, under illegal military occupation by Armenia’s armed forces, which the international community has publicly condemned. International courts have condemned the ethnic cleansing against Azerbaijani civilians. The associated massacres committed against Azerbaijanis have been classified as crimes against humanity. President Reuven Rivlin referred to Armenian atrocities against Azerbaijani civilians in the 1990s as an example of “modern day genocide.” Today we have the opportunity to stand up and intervene, before it happens again.

Tags country of israel
Advertisement
Subscribe for our daily newsletter