Dershowitz: Trump was right to try to stop Obama

President Obama’s lame duck attempt to tie the hands of his successor is both counterproductive to peace and undemocratic in nature. 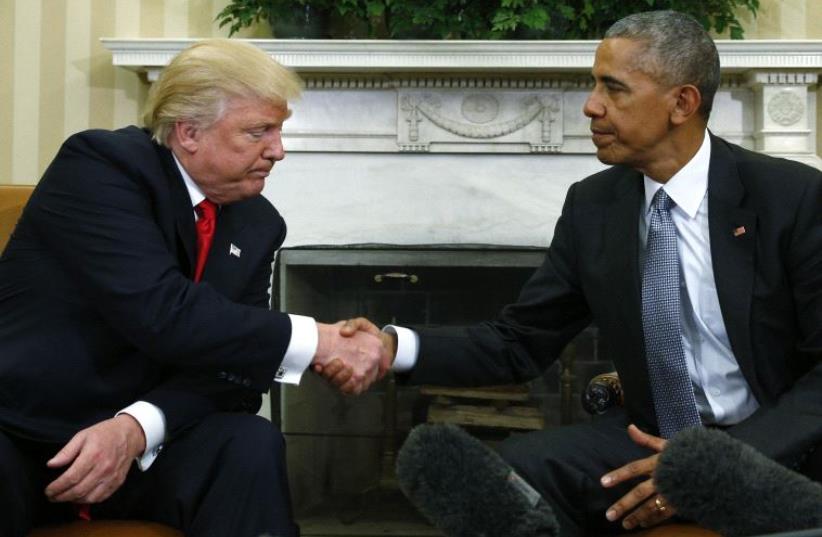 U.S. President Obama greets President-elect Trump in the White House Oval Office in Washington
(photo credit: KEVIN LAMARQUE/REUTERS)
Advertisement
The Egyptian decision to withdraw the one-sided anti-Israel Security Council resolution should not mask the sad reality that it is the Obama administration that has been pushing for the resolution to be enacted. The United States was trying to hide its active ‘behind the scenes’ roll by preparing to abstain rather than voting for the resolution. But in the context of the Security Council where only an American veto can prevent anti-Israel resolutions from automatically passing, an abstention is a vote for the resolution and because of this automatic majority, an anti-Israel resolution like this one cannot be reversed by a future American president. A veto once cast cannot be cast retroactively.The effect, therefore of the Obama decision to push for, and abstain from, a vote on this resolution is to deliberately tie the hands of President Obama’s successors, most particularly President-elect Donald Trump. That is why Trump did the right thing in reaction to Obama’s provocation. Had the lame duck president not tried to tie the incoming president’s hands, Trump would not have intervened at this time. But if he had not urged the Egyptians to withdraw the resolution, he would have made it far more difficult for himself to try to bring about a negotiated resolution to the Israeli-Palestinian conflict.The reason for this is that a Security Council resolution declaring the 1967 border to be sacrosanct and any building behind those borders to be illegal would make it impossible for Palestinian leaders to accept less in a negotiation. Moreover, the passage of such a resolution would disincentivize the Palestinians from accepting Israel Prime Minister Netanyahu’s invitation to sit down and negotiate with no preconditions. Any such negotiations would require painful sacrifices on both sides if a resolution were to be reached and a Security Council resolution siding with the Palestinians would give the Palestinians the false hope that they could get a state through the United Nations without having to make painful sacrifices.President Obama’s lame duck attempt to tie the hands of his successor is both counterproductive to peace and undemocratic in nature. The lame duck period of an outgoing president is a time when our system of checks and balances is effectively suspended. The outgoing president does not have to listen to Congress or the people. He can selfishly try to burnish his personal legacy at the expense of our national and international interests. He can try to even personal scores and act on pique. That is what seems to be happening here. Congress does not support this resolution; the American people do not support this resolution; no Israeli leader – from the left, to the center, to the right – supports this resolution. Even some members of Obama’s own administration do not support this resolution. But Obama is determined – after 8 years of frustration and failure in bringing together the Israelis and Palestinians – to leave his mark on the mid-East peace process. But if he manages to push this resolution through, his mark may well be the end of any realistic prospect for a negotiated peace.One would think that Obama would have learned from his past mistakes in the mid-East. He has alienated the Saudis, the Egyptians, the Jordanians, the Emirates and other allies by his actions and inactions with regard to Iran, Syria, Egypt and Iraq. Everything he has touched has turned to sand.Now, in his waning days, he wants to make trouble for his successor. He should be stopped in the name of peace, democracy and basic decency.But it now appears that Obama will not be stopped. Four temporary Security Council members have decided to push the resolution to a vote now. It is difficult to believe that they would have done so without the implicit support of the United States. Stay tuned.Addendum As predicted, the United States allowed the anti-Israel resolution to be approved by the United Nations Security Council. Votes in favor were cast by Russia, which has occupied Kornengsberg since 1945, after capturing that ancient German city, ethnically cleansing its population and bringing in hundreds of thousands of Russian settlers; China, which has occupied Tibet and brought in thousands of Chinese settlers; France who occupied and settled Algeria for many years; Great Britain which has occupied and colonized a significant portion of the globe; and assorted other countries, several of which have horrendous human rights records.Israel on the other hand, offered to end the occupation and settlements in 2000-2001 and again in 2008 only to be rebuffed by the Palestinian leadership. But Israel is the only country to have been condemned by the Security Council for an occupation and settlement. This hypocrisy is typical of the United Nations as even our representative acknowledged when she explained why the United States abstained.Now peace will be more difficult to achieve, as the Palestinians become further convinced that they do not have to accept Netanyahu’s offer to negotiate without preconditions.Thank you, President Obama for completing your 8 years of failed foreign policy with a final blow against, peace, stability and decency.Congress can ameliorate the impact of this destructive resolution by enacting a statute declaring that the resolution does not represent the United States’ policy, which is that peace will not come through the United Nations but only by direct negations between the parties. The law should also prohibit any United States funds to be spent directly or indirectly in support of this Security Council resolution. I suspect that the incoming president will be willing to sign such a law.