Prime Minister Benjamin Netanyahu was furious, launching a tirade of abuse, speaking of betrayal and a fundamental bias against Israel. 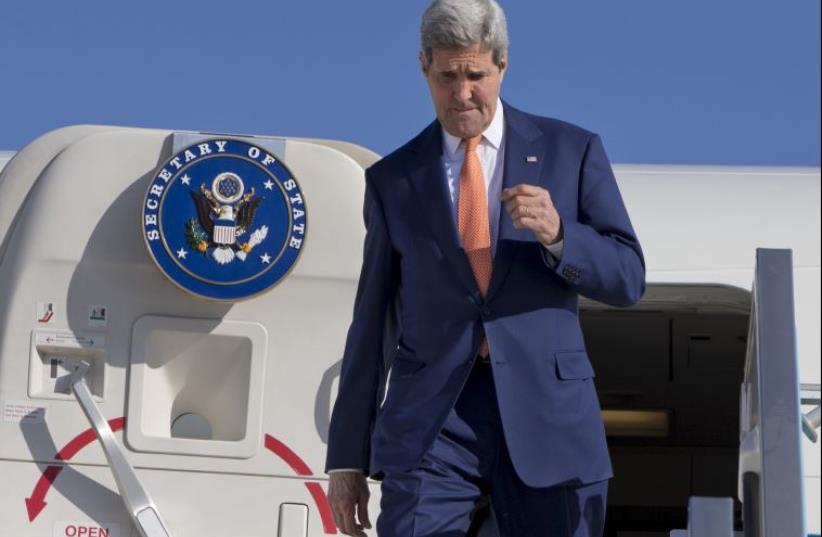 US Secretary of State John Kerry arrives in Tel Aviv, Israel
(photo credit: REUTERS)
Advertisement
There is, I believe, in every disposition a tendency to some particular evil, a natural defect, which not even the best education can overcome.”“And your defect is a propensity to hate everybody.”“And yours,” he replied with a smile, “is wilfully to misunderstand them.”– Jane Austen, ‘Pride and Prejudice’We just finished marking Hanukka and the beginning of 2017. But when it comes to US-Israel relations there’s not much light or “goodwill to all men” to be found. Instead, just plenty of heat and some of the worst political language heard between the two countries that I can remember (I’m 43).It all started when the US took the unprecedented step of abstaining on a UN vote critical of Israel’s settlement policy. This was the first time that the US abstained, usually always voting against.Prime Minister Benjamin Netanyahu was furious, launching a tirade of abuse, speaking of betrayal and a fundamental bias against Israel.So far, so Netanyahu. His default position when attacked is that of Rottweiler: bite back hard, ask questions later.Then things got really nasty. I, like many of you, I’m sure, was watching US Secretary of State John Kerry’s speech last week. Kerry called Netanyahu’s government the “most right-wing coalition in Israeli history” and warned that the rapid expansion of settlements in the occupied territories meant that “the status quo is leading toward one state and perpetual occupation.”Israel’s actions, he said, were putting the very notion of a twostate solution in jeopardy.Then the real monocle-falling-into- the-glass moment came when he said that Israel cannot be both a Jewish state and a democratic one.Come again? At this stage I switched off my TV in disgust. Are the US, UK or France for that matter not both democracies and Christian? Never have I heard such an ill-tempered and ill-measured rant from an American secretary of state.While few will disagree that the current Israeli government is the most right-wing in history, his other comments were so over the line that even notorious tennis crybaby John McEnroe wouldn’t have objected.There’s an expression that a bad workman always blames his tools.And the Kerry speech felt every bit like that. His administration had eight years to try and make some impression on the conflict. By any benchmark it failed miserably. The US-Israel relationship was the rockiest it had ever been, despite security cooperation. Precisely zero progress was made, as the focus rested solely on settlement construction at the expense of a multitude of other issues that are obstacles to peace, such as Palestinian incitement.US strategic diplomacy has taken a severe battering of late. One only need look at Syria and how the Russians and Turks have brokered a cease-fire (the Americans through gritted teeth welcomed it), or how Philippines President Rodrigo Duterte feels bold enough to give a two-fingered salute to the US, preferring instead closer ties with Moscow and Beijing.The only piece of silverware, if you can call it that, in the US foreign policy success cupboard is the one that they awarded themselves over the Iran nuclear deal. As former Scottish MEP Struan Stevenson succinctly put it, “Aleppo, Mosul, Ramadi, Falluja, Yemen, Lebanon, everywhere you find destruction and brutality in the Middle East you discover it is being caused by the Iranian regime who want to spread their sick vision of Islamic fundamentalism around the world.”Speaking of British politicians, even UK Prime Minister Theresa May took the unprecedented step of distancing herself from Kerry’s comments as a bridge too far.Look, of course things are not easy in Israel just now, and the country is as split over the issue of settlements as the UK is over Brexit, or Germany or France are over immigration. But this type of thundering and stamping of feet is the political equivalent of the proverbial use of sledgehammer to crack a nut. More than that, it is political cowardice: inability to accept failure.Let us be clear: US foreign policy has failed, its influence is on the wane. That’s why Kerry’s fit of pique was so undignified. It seemed as if he was flailing around for someone to blame for the empty cupboard.Clue: there’s this thing called a mirror.We suggest you and the president take a look in one, John.The author is director of EIPA: Europe Israel Public Affais, a multi-disciplinary pro-Israel advocacy group based in Brussels, with offices in Paris and Berlin.