Hopefully the Hezbollah and Hamas cases do not foretell the beginning of a new era in which EU-Israeli/Arab views on regional security further diverge. 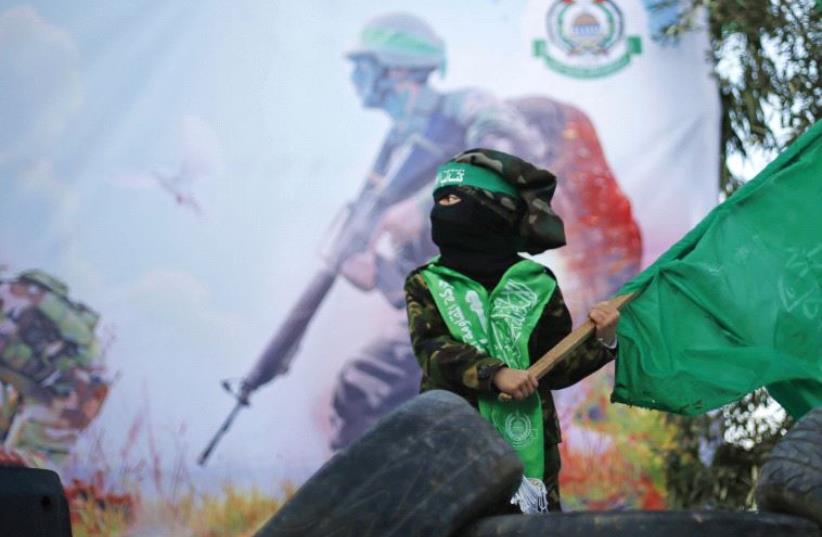 Hamas protest
(photo credit: REUTERS)
Advertisement
This week, a five-member Knesset delegation, headed by MK Yaakov Perry, will visit the European Parliament in Brussels. It is always a great pleasure to welcome Israeli friends, especially now, around the start of the Christian and Jewish new years. It makes it an opportune moment to reflect on the state of EU-Israel relations and highlight some positive and worrying tendencies.The recent EU-Israeli cooperation on Creative Europe, to increase jobs and growth by supporting the cinema, cultural and creative sectors in Europe and Israel, is to be welcomed.While such efforts and other EU-Israeli cooperation on mutually beneficial subjects are to be supported, they may not be overshadowed by two worrying security trends in Europe.The first worrying trend is to not call a spade a spade, or rather, call both the “military” and “political/social” wings of terrorist organizations terrorist organizations. It is part of the Oriental naiveté through which the EU views the Middle East.In the case of Hezbollah, the EU included solely the military wing in its terrorism list, on July 22, 2013. The theoretical assumption came after strong evidence was uncovered pointing at Hezbollah’s fingerprints all over the 2012 Burgas bombing.One does not need to look far to see Hezbollah and trouble.Hezbollah plays a significant role in Syria (as do Russia and Iran), which is a critical cause of the Syrian refugee crisis. Some of these refugees turn up on the shores of Europe. Therefore, it is not only a regional or Syrian interest, but also a European interest to stand strongly against Hezbollah. Those are, sadly, Hezbollah’s facts (or boots?) on the ground.To highlight the absurdity of the flawed EU logic, one could view al-Qaida as having an urban planning wing because of its desire to level tall buildings, as once suggested by Israeli ambassador to the UN Ron Prosor in Foreign Policy, February 2013. The EU’s position on Hezbollah’s military and political/ social wings is just as startling and futile. As Hezbollah mixes its political and social welfare activities with its terrorist and criminal ones, any clear distinction between its activities can no longer be made. Deputy secretary general of Hezbollah Naim Qassem has said it himself: the Party of Allah (Hezbollah) does not have a political/ social wing on the one hand and a resistance (meaning military) wing on the other. Therefore, without delay, the EU should include Hezbollah as a whole on the EU’s terrorism list.The second worrying trend is the recent advice given by advocate general Eleanor Sharpston in the opinion of the European Court of Justice (ECJ) to not include the Hamas movement on the EU’s list of terrorist organizations. The issue is part of an ongoing legal confrontation between the ECJ and the European Council; the latter favors such an inclusion.While the ECJ opinion is not binding, various insiders note that in most instances – citing figures as high as 80% – it is followed in the final ruling, which is expected before 2017.Hopefully the Hezbollah and Hamas cases do not foretell the beginning of a new era in which EU-Israeli/Arab views on regional security further diverge. It is glaringly obvious that, in the EU’s quest to combat terrorism, it would be counterproductive and counterintuitive to not include Hamas, or Hezbollah in its entirety, in the EU terrorist list. Stronger European-Israeli cooperation in all areas of mutual interest should be nurtured, to enable our regions to be safer, more innovative and more prosperous. The upcoming Knesset delegation could not come at a more perfect time.We look forward to welcoming our Israeli friends at the 42nd inter-parliamentary meeting and may there be many more years of warm fruitful cooperation! Bas Belder is a Dutch member of the European Conservatives and Reformists (ECR) Group at the European Parliament. He is a member of the Foreign Affairs Committee, serves as vice-chair of the Israel Delegation and is a member of Europe Israel Public Affairs Advisory Committee.Elise Coolegem is a policy adviser on the Middle East for the ECR Group at the European Parliament. She has lived in the Middle East for several years and obtained her MA in conflict resolution and mediation from Tel Aviv University.