If the fear is that allowing Jews to do so will upset Arab extremists, then the task before security officials should be clear. 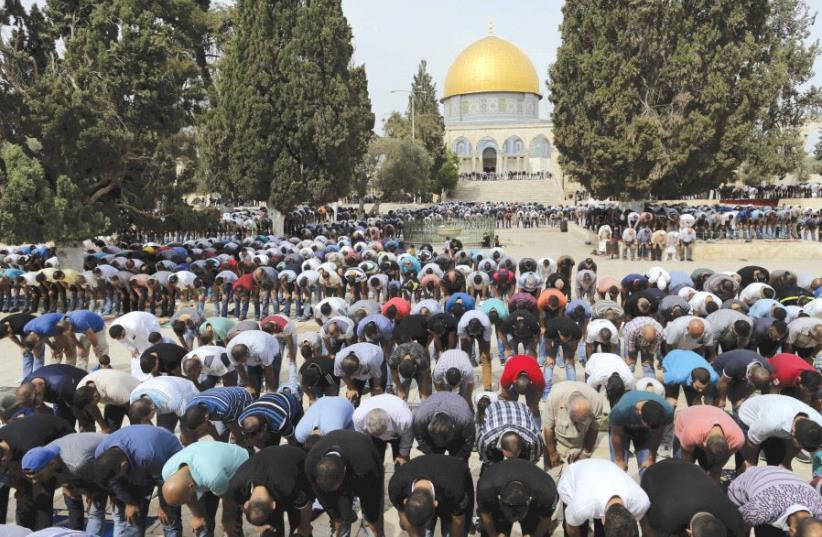 THE DOME of the Rock is seen in the background as Palestinian men take part in Friday prayers in Jerusalem.
(photo credit: REUTERS)
A series of troubling incidents in recent weeks has left little room for doubt that one of the central pillars upholding Israeli democracy is increasingly coming under assault.Indeed, even as the Jewish state likes to boast abroad that every citizen enjoys freedom of worship and free access to the holy places, Israeli security forces have repeatedly curtailed the exercise of that right specifically when it comes to Jews.This disconcerting development not only flies in the face of Jewish self-respect and common sense, but also runs counter to Israel’s raison d’être, and it cannot be allowed to continue.Take, for example, the detention early Tuesday morning of four Jews who went to pray at the tomb of Joshua bin Nun, who led the conquest of the Land of Israel when the Israelites reached the Promised Land after the Exodus from Egypt.This ancient Jewish holy site is located on the outskirts of the village of Kifl Hares, adjacent to Ariel, in an area under full Israeli security control. The worshipers were arrested after an IDF officer had apparently issued a recent military order which bars Jews from visiting the site.There are two troubling aspects to this situation.First, back in January, the Petah Tikva Magistrate’s Court unconditionally released 10 Jews who had been detained at Joshua’s Tomb after a representative of the police admitted that there was no legal impediment to Jews traveling to the site or praying there.Second, the fact that a military official has the power to curb the basic civil rights of citizens without due process is something that should terrify us all. There is no reason, other than exigent circumstances, that anyone other than the courts should be invested with such authority. Trampling on fundamental freedoms of Israeli citizens is not a power than any general or colonel should have.Unfortunately, it is not just the military that engages in such shenanigans, but the Israel Police too.According to media reports, the police acceded to requests from the Greek Orthodox Church to ban Jews from lighting traditional bonfires for Lag Ba’omer next week in a park zoned for public use on Mount Zion, just outside the Old City of Jerusalem.Although the land in question is registered as being under the church’s ownership, it is nonetheless defined as a public area, which entitles people to utilize and enjoy it.The church has every legal right to ask the police to prevent vandalism and littering on the site. But what gives law-enforcement authorities the right to respond so cavalierly to the request and bar an age-old Jewish custom from being followed? Another outrageous example of police overreach occurred last month in Jerusalem, when six young women went to pray at the Gate of the Tribes at the northeastern entrance to the Temple Mount. The group did not enter the Mount, where police do not allow Jews to pray or even carry a Bible, but merely stood outside it and sought to commune with the Creator.Border policemen quickly arrived, dispersed the group and detained a 13-year-old.It is bad enough that the police prohibit Jews from praying on the Temple Mount, but what gives them the authority to extend that dubious ban to include praying near it? While such incidents have become routine, and barely earn a headline in the daily media, that in no way means they are any less worrisome or unreasonable.It is yet another example of how unchecked power inevitably leads to an erosion of basic rights. And it is a sad commentary on the current state of affairs that we have reached a point where one can, in all seriousness, pose the following question: Why can’t Jews pray freely in the Jewish state? As John Adams wrote two centuries ago to his friend and compatriot in the founding of America, Dr. Benjamin Rush, “Nothing is more dreaded than the national government meddling with religion.”So here is a quick civics lesson for the army, the government and the police: Your job is to ensure that citizens can exercise their rights freely, not to restrict or curtail them.If the fear is that allowing Jews to do so will upset Arab extremists, then the task before security officials should be clear. Safeguard the rights of the former rather than bow to the threats of the latter.After all, that is how democracy is supposed to work.