Here and There: Volunteering today for a better tomorrow

As we approach Good Deeds Day let us take pride in our volunteers who give of themselves in order to improve the lives of others. 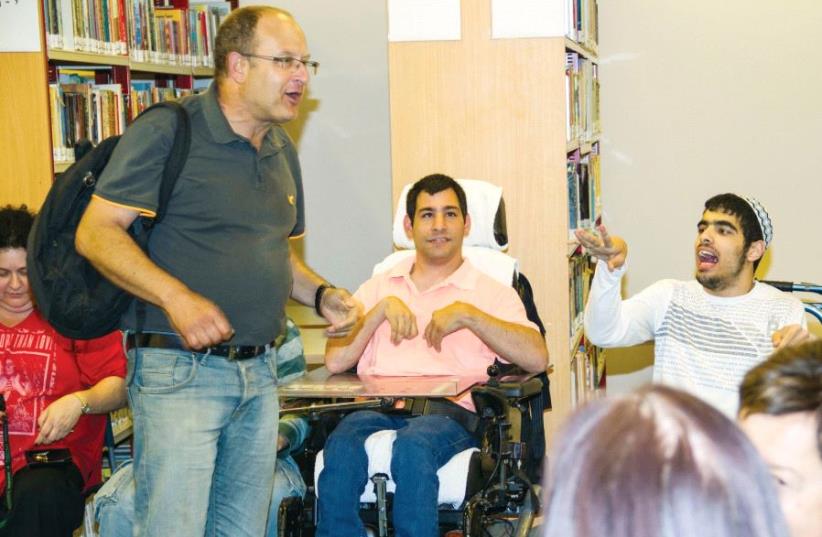 Leslie Henan with members of the Kfar Shmaryahu Social Club for Handicapped Young Adults, where he volunteers
(photo credit: MIKE ALTMAN)
Advertisement
Goods Deeds Day was initiated in 2007 – right here in Israel – by businesswoman Shari Arison, as part of the philanthropic arm of the Arison Group.From its beginning in 2007, with 7,000 Israeli participants, it has evolved to become an international day. In 2016, 75 countries participated, attracting 1,500,000 volunteers of whom 1,300,000 were Israelis who took part in 14,000 projects and gave over four million hours of voluntary service.This year’s International Good Deeds Day is scheduled to take place on Sunday April 2. However, Israelis will be volunteering to carry out good deeds on Tuesday March 28. (This is because, in Jewish tradition, Tuesday is considered a “good day” whilst elsewhere it is more convenient to hold the day on a Sunday when most people are not working.) Perhaps it is no coincidence that this growing movement is prevalent in Israel.For all its technological and economic success Israel still relies heavily on amutot – non-profit organizations – to help the underprivileged members of society. There are some 45,000 NGOs registered here. Of these, according to the website Israel Gives, there are 26,000 organizations offering support in education, health, children and youth at risk, the elderly and animal rescue.Many of these organizations rely on volunteers to help them with their varied support programs. These volunteers are committed to making a positive difference in the lives of others.What makes someone want to volunteer? Perhaps one of the major factors is reaching retirement age and seeking another form of occupation. It can be scary to wake up in the morning and suddenly wonder, “What will I do today?” For sure, this is an important element in the recruitment of volunteers.Throughout many years of being involved in NGOs – both in the UK and here – it has been my privilege to meet numerous individuals who bless the day they became part of a volunteer force.All say, without hesitation, that what they give is little compared to what they receive in return.While reaching retirement age may be a prime component in electing to be a volunteer, sometimes retirement is forced at an earlier age than expected.Such is the case of Leslie Henan, who came to Israel with his mother and brother from South Africa at the age of 13. Henan practiced as an attorney and notary for 24 years. On December 8, 2008, at the age of 52, while in his office, he had an aneurysm. He remembers little of the two months that followed as he was in a coma for most of the time. The next 18 months were filled with operations including implants in the brain and the insertion of six platinum plates.By 2010 it became clear that Henan would not be able to return to his profession, in fact he would no longer be able to earn a salary. However the idea of sitting at home feeling sorry for himself did not appeal to him in the slightest. He loves people; he enjoys interacting with them and so began a new career in volunteering that continues until today.Currently he is engaged in two projects – the first is a Kfar Shmaryahu social club for handicapped young people.Here, every Monday evening some 16 men and women (between the ages of 18 and 30) come together to enjoy social activities just as any other young person would wish to experience.Henan rides to the center in one of the special vehicles for the handicapped taking the participants to the club. He is an integral part of the group’s activities giving many hours of dedicated volunteering. The youngsters love him as much as he loves them. They are in constant Facebook touch with one another between one Monday and the next. Henan tells me that if he misses a week he is immediately bombarded with messages anxious to know the reason for his absence.The second project involves people who suffered brain and head injuries.He helps 22 people at a special rehabilitation center. Clearly for someone like Henan, who understands better than most what these patients are experiencing, he is a wonderful role model giving hope for a brighter future.Back to the beginning – Good Deeds Day is almost upon us, just 18 days away.What is clear is that Israel attracts, by far, the most volunteers on this day. A country that has successfully absorbed millions of immigrants (some who arrived with only the clothes in which they stood) offers manifold opportunities for those seeking to contribute through volunteering.As we approach Good Deeds Day let us take pride in our volunteers who give of themselves in order to improve the lives of others. To quote Winston Churchill – “We make a living by what we get but we make a life by what we give.”■ The writer is public relations chair of ESRA, which promotes integration into Israeli society, and active in public affairs.