The public’s trust in government depends on truthful and honest administration. 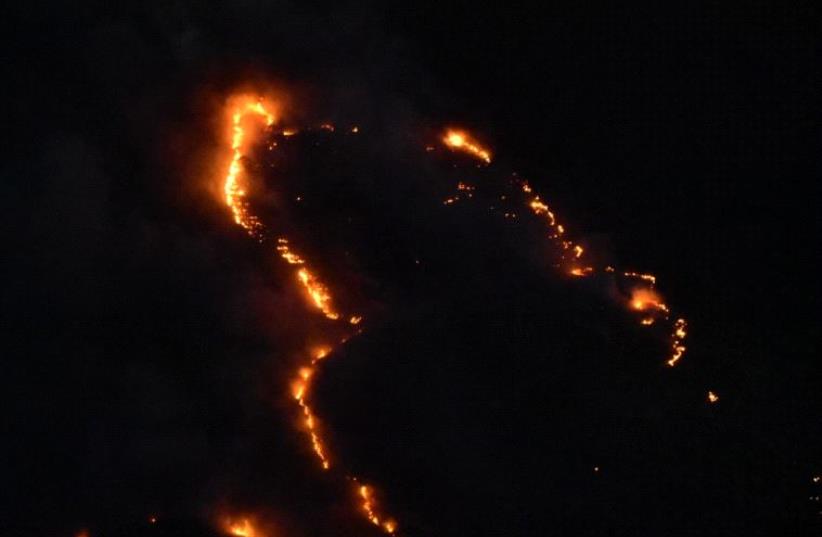 Fire near Jerusalem.
(photo credit: POLICE SPOKESPERSON'S UNIT)
Advertisement
At the beginning of the week, Moshe Asher, head of the Tax Authority, provided a list of towns and settlements that were said to have been damaged as a result of “pyro-terrorism.”Asher’s announcement has far-reaching ramifications for homeowners. The Tax Authority head was determining who would foot the bill for damage caused by the brush fires that hit the Haifa area and the Judean Hills.All homes that were said to be damaged by hostile acts, war or terrorism are funded by the authority’s Property Tax Fund. In contrast, if pyro-terrorism was not the cause of the fires, insurance companies are obligated to compensate homeowners – but only those homeowners with home insurance.Since Asher published his list, the Israel Police and the Fire and Rescue Authority have taken issue with some of the towns that appear on it. For instance, in Nataf bottles filled with flammable materials were found, but there is no other indication of arson and no suspects.There are a number of interests involved that might have determined why Asher was so quick to determine that the vast majority of the fires were caused by terrorists.The insurance companies have a vested interest in seeing that as many fires as possible were the result of terrorism. In these cases, they are exempt from paying anything.True, the insurance companies have displayed largesse. They reached an agreement with Finance Minister Moshe Kahlon and his deputy Yitzhak Cohen that in cases where the Tax Authority fund does not cover all the damage caused to an insured homeowner, the insurance companies with cover the gap.The insurance companies, however, agreed to do this in order to avoid a major PR debacle. The insurance companies do not want a situation in which those homeowners with insurance are treated the same way as those without insurance.And the companies have no problem going along with this deal if they are assured that the number of towns declared to be damaged by pyro-terrorism is maximized, thus exempting them from most of the payment.The finance minister also has an interest in bring about a speedy conclusion to the whole compensation issue. He can use the fires as an opportunity to show how effective and responsive he is as minister.But to do that he needed Asher’s declaration.The Tax Authority fund receives its money from property taxes and is not part of the state budget.Presently, there is NIS 8.3 billion in the fund and more is expected to be injected next year. The fund is not financed from the budget, which might explain why the finance minister was so quick to announce that the fires that swept across the nation were the result of pyro-terrorism. Money paid from the fund does not affect the size of the state budget or the deficit.So Kahlon is using state funds to bolster his image, but the money will not force him to compromise other programs in the state budget.Of course, it could very well be that while the police have not finished their investigation, all the signs seem to point to pyro-terrorism and there was, therefore, no reason to delay the announcement.Still, too many powerful interests are involved to assume that the decision-making process was without flaws.Asher’s declaration regarding the scope of the pyro-terrorism also damages the image of the Arab population, even more so if he did exaggerate the numbers. Arab-Jewish relations are bad enough as it is when keeping to the facts.In towns where police and firefighters still have a reasonable doubt as to whether the fire was the result of terrorism, the Tax Authority should reconsider its hasty decision. The public’s trust in government depends on truthful and honest administration.