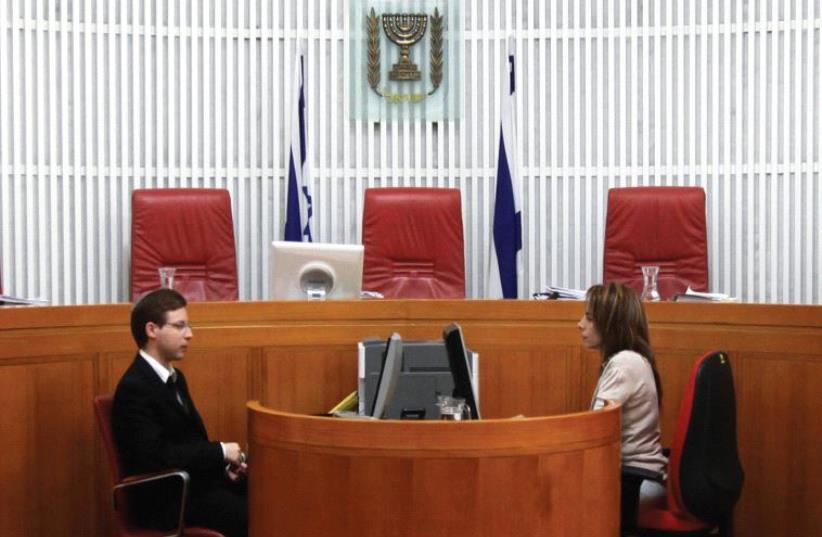 ‘THE COURT’S slide into determining the composition of the government constituted a grave violation of the separation of powers and led it straight into the political arena.’
(photo credit: MARC ISRAEL SELLEM/THE JERUSALEM POST)
Advertisement
The recent Jerusalem Post editorial “Judicial activism – the lesser evil” criticizes the views expressed in my book The Purse and the Sword – The Trials of Israel’s Legal Revolution while extolling a long list of Supreme Court decisions. I am afraid that my position has been misunderstood. In my view, judicial activism may be justified in some instances but is unacceptable when it disregards reasonable Knesset legislation, assumes that everything is justiciable, ignores the separation of powers and turns the court into a player in the political and governmental arena.The distinction between different types of judicial activism can be demonstrated by reference to two lines of cases, both discussed in my book and both equally praised in your editorial. In one of them the court recognized converts by non-Orthodox streams of Judaism who underwent their conversions abroad as coming within the Law of Return. In the other the court “force[d] a prime minister to fire ministers even though the law does not require him to do so.” These cases raise completely different issues. The conversion cases are concerned with a legitimate and reasonable interpretation of Knesset legislation and I fully support the result reached.But judicial legislation invented to force a prime minister to fire ministers belongs to an entirely different category.It is a political issue that does not concern human rights in any way. The court’s slide into determining the composition of the government constituted a grave violation of the separation of powers and led it straight into the political arena. The question is not whether the result is good or popular but whether the court was allowed to legislate criteria regarding the composition of the cabinet.Indeed, for many years it was understood that a minister need not resign if indicted (though they were of course free to do so). Thus, in 1980 a cabinet minister, Aharon Abuhatzeira, had been put on trial for financial offenses. He continued to serve in the cabinet during his trial and left the government only after his conviction. Although this was not an entirely satisfactory situation, it was in line with the presumption of innocence that prevailed at the time.In 1993, during Rabin’s second term as prime minister, the issue arose with regard to Arye Deri, leader of Shas Party, and deputy minister Raphael Pinchasi after a list of charges had been prepared against each (the charges against Pinchasi were less severe). It was clear that if Deri were forced to leave the government, Shas would leave the coalition, which would then lose its majority.Rabin desperately needed Shas to remain in the coalition, especially as the government was then engaged in the highly sensitive and crucial negotiations – those relating to the Oslo agreements.Nevertheless, at this most inopportune moment the Supreme Court invented a new, vague rule under which it could order the prime minister to fire a minister if the court considered it unreasonable not to do so.The decision ordering Rabin to dismiss Deri and Pinchasi had a devastating effect on the government. Shas left the coalition, leaving the government without a majority, at a most sensitive time.To survive no-confidence motions, pass legislation and further the Oslo agreements Rabin depended on the support of two Arab parties, which opened him up to accusations that, in matters relating to agreements with the Palestinians, he was beholden to Palestinian interests rather than the best interests of the Jewish state.Looking at the situation as a whole it was eminently reasonable for Rabin to abstain from dismissing Deri. However the court took a narrow view on this matter, disregarding the political implications of the new problematic rule that it was just legislating.The new ruling has another implication: it granted unelected officials the power to influence the composition of the government.The investigation of Reuven Rivlin, today president of Israel, is a case in point. Rivlin, who was considered inimical to the legal revolution, was slated to become justice minister. On the eve of his appointment in March 2001, the State Attorney’s Office suddenly announced that he was under investigation. It declared that he could not be appointed justice minister, but could receive the communications portfolio. There was nothing in the absurd allegations against Rivlin, but they sufficed to frustrate his appointment to a position in which he could have affected the legal revolution.Rivlin himself coined the now popular expression “the rule of law gang” to refer to his accusers.Let me also add that my views are in line with the criticism leveled against the Supreme Court by its late president Moshe Landau in an interview with Ari Shavit (Haaretz, October 6, 2000). Landau pointed out that the court amassed too much governing power, which, he said, “is dangerous both for the country and for the court.” He maintained that the Supreme Court had lost its sense of humility and displayed arrogance and hubris. Landau also referred to Plato’s Republic, and his proposal to entrust the government to a class of sages, and added that it seemed to him that “most of the justices on the Supreme Court see themselves more or less as governing sages.”The author was the Minister of Justice from 2007-2009 and a professor at Tel Aviv University.