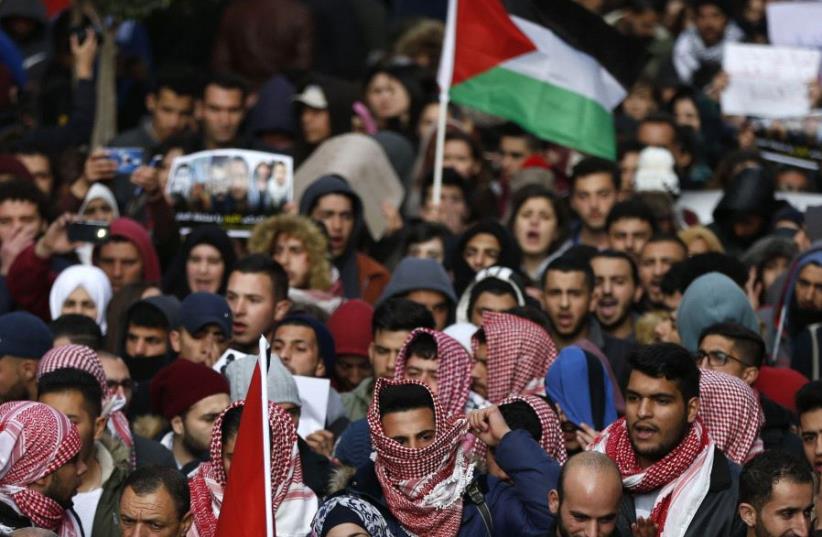 Palestinians demonstrate in the centre of the West Bank city of Ramallah against PA security forces
(photo credit: ABBAS MOMANI / AFP)
Advertisement
In a landmark ruling this week, Jerusalem District Court Judge Moshe Drori ruled that the Palestinian Authority is “liable” for terrorist attacks that took place during the Second Intifada, the violent Palestinian uprising against Israel between 2000 and 2005.
The unprecedented case was initiated by Shurat HaDin, the Israel Law Center, a Tel Aviv-based NGO focused on representing victims of terrorism. Shurat HaDin was acting on behalf of the families of eight such victims. The next stage of the case will involve proving damages in 17 separate terrorist attacks, which according to Jerusalem Post legal correspondent Yonah Jeremy Bob, could total some NIS 1b. (more than $280 million).Most of the 17 attacks occurred between 2000 and 2002, including the Park Hotel bombing on Passover night.Although some of the terrorist attacks during the Second Intifada were claimed by Hamas and Islamic Jihad, Judge Drori ruled that the PA was ultimately liable, based on official PA statements inciting, taking credit for and supporting all terrorist attacks during the violent uprising. The Second Intifada ultimately claimed the lives of some 1,100 Israeli civilians, 2,000 Palestinians and 64 foreigners.
Drori noted that during the uprising, the PA not only provided logistical and financial support to terrorists, but bankrolled terrorists and their families, as well as naming streets, squares, schools and sporting events after so-called “martyrs” killed while carrying out attacks.Shurat HaDin founder Nitsana Darshan-Leitner said the court’s historic decision showed that then-PA leader Yasser Arafat employed violence in the Second Intifada in an attempt to squeeze concessions from Israel that he had not succeeded in obtaining via the Oslo peace negotiations.“What Arafat did not achieve through the Oslo Accords, he tried to achieve through suicide bombings and shootings,” Darshan-Leitner said. “The Palestinian cause was genocide against Jews in Israel, and for that it will now pay dearly.”Darshan-Leitner added that the court’s ruling proved that the Second Intifada “was not a popular uprising, but a planned and deliberate war against the civilian population of Israel.”In his ruling, Drori concluded that it was “the declared policy of the PLO and PA... to carry out terror attacks against Israel,” and that they bear responsibility for “financial and practical support” as well as ideological encouragement for the attacks.The PA, which has been led by Mahmoud Abbas since 2005, declined to issue a statement on the court’s ruling. While this is not surprising, if the PA has any sense of humanity at all it should at the very least decry the disgusting terrorist attacks perpetrated in its name during the Second Intifada.The problem is that Abbas’s PA has not relinquished terrorism, and continues to pay stipends to terrorists and their families and glorify “martyrs.” Both Israel and the US have passed legislation to penalize the PA for continuing its “pay-for-slay” policy.Instead of admitting the injustice it is perpetrating, the PA’s response has been to reject US and Israeli financial support, thereby not only legitimizing terrorism but harming innocent Palestinian citizens. In fact, Israeli officials believe that the PA is in danger of financial collapse due to a lack of funding.While in all probability the PA will not and cannot pay the billion shekels in damages set by the court, Israel can take punitive action against it. For example, the Jerusalem District Court in January placed a lien on a plot of land on Jerusalem’s Mount of Olives Cemetery owned by Arafat’s estate, after Shurat HaDin sought the land as collateral for its claims against the PA.We applaud Drori for his moral judgment on Sunday.It is now up to Israel, the United States and the international community to ramp up the pressure on the PA to change its course or pay the price.