Peace when Jews and Arabs educate their children together

“We will have peace with the Arabs when they love their children more than they hate us.” 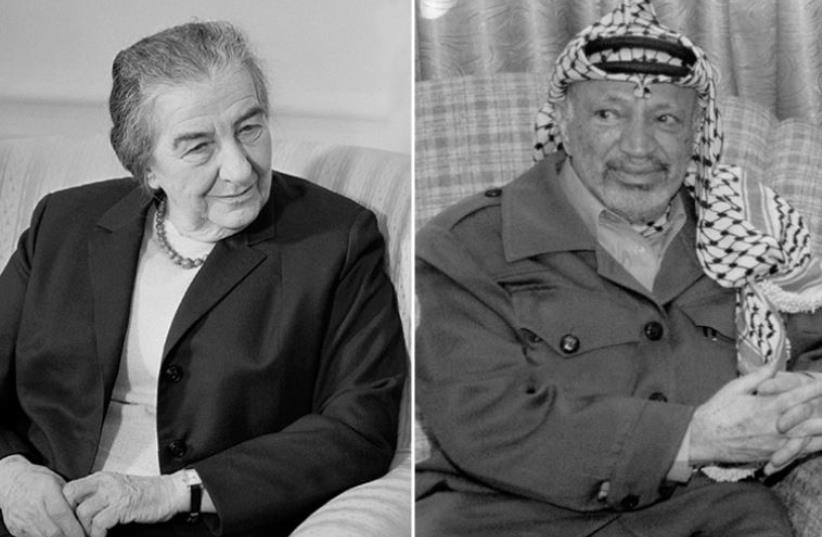 Golda Meir and Yasser Arafat
(photo credit: REUTERS,Wikimedia Commons)
Advertisement
Golda Meir was one of my heroes growing up – a smart Jewish woman who worked tirelessly, selflessly, on behalf of the Jewish People to secure the establishment and security of the State of Israel. So I was taken by surprise when my children’s school principal, Nadia Kinani, came in to school one day deeply upset after visiting another local school, which had these oft-quoted words of Golda Meir embedded in a huge mural at the school’s entrance: “We will have peace with the Arabs when they love their children more than they hate us.”Nadia is an Arab mother. She has spent the past 20 years of her life helping found and develop a Jewish-Arab integrated bilingual school in Jerusalem. At the time, this was almost unprecedented in Israel. She and other teachers had to innovate pedagogical approaches so students could learn each other’s languages, traditions, cultures and histories, while helping them commit to a shared future. Even now there are only nine such Jewish-Arab schools in all of Israel.Seeing Golda Meir’s quote through Nadia’s experience made me understand the messages we absorb implicitly from it. Such messages lay the groundwork for a belief system that Jews and Arabs will never be able to live in peace. Such messages are not unique to this quote, nor only to Israeli Jewish schooling. They are part of the conflicted history Jews and Arabs in Israel inherit, and the ongoing conflict that embitters people’s lives and remains unresolved. Nonetheless, we can choose which lessons to draw from this history and what kind of future to build toward.Jewish and Arab children attend different schools because Israel’s schools are tracked along communal lines: Jewish secular, religious and ultra-Orthodox, and Arab. While this reflects and respects the differences, and preferences, of the major populations in Israel, it means that the vast majority of children grow up with little or no contact outside of their community. Separate schooling, residential areas, media and the general lack of daily contact reinforce ignorance and mistrust of each other. This also prevents the development of pathways to understanding and cooperation.Going to school together exposes you to each other’s perspectives, not only in the explicit ways they are taught, but precisely in exchanges like mine with Nadia about Golda Meir’s statement. It makes you understand each other more deeply, and examine your own assumptions.Being together does not eliminate disagreements, but it equips you to find ways to discuss and work with them. This forges a different psychological and societal premise on which to build a society, creating a citizenry equipped to appreciate diversity and work constructively with the inherent challenges of difference. Only in this way can we stop fighting and fearing each other, and find a way to live together peacefully.President Reuven Rivlin has been an outspoken advocate regarding the existential necessity facing Israel to build a genuine partnership between the four major community groups. Israeli society is fragmenting along these communal seam lines, facing civil tensions that can too easily turn to civil unrest. Bringing Jews and Arabs together in a shared educational partnership is not about political correctness or providing some shallow multicultural facade. It is a pragmatic, political, economic and security necessity.The state education system plays a central role in this.A recent report from the State Comptroller offers a sobering assessment of the failure of Israel’s education system to teach students toward coexistence, instead imparting conflicting views of Israeli society and core values. The report also offers a very clear path of action for policy makers, educators and students. It begins with bringing students together in formal and informal educational frameworks to help them appreciate the richness of their different traditions, cultures and histories, and also contend with the inevitable challenges that come with this.The school Nadia leads, the Max Rayne Hand in Hand Bilingual School, has grown into a K-12 school, part of the mainstream school system, academically excellent and socially pioneering. It serves as a flagship for the other integrated schools in Israel, the only schools where Jews and Arabs are brought together in a shared educational partnership.Last year Nadia was recognized by Shimon Peres as one of eight women leading profound change in Israeli society. This week the school was awarded the prestigious Education Prize by the Jerusalem Municipality.Hundreds are on waiting lists at all six of Hand in Hand’s schools, and parents in a dozen other cities have turned to Hand in Hand to start an integrated school. These parents see this as the best way to educate their children, and the best way to build a shared future.Not every parent in Israel has to choose to send their children to an integrated school. But every Jewish and Arab parent should be able to choose an integrated school. Those who attend will be uniquely equipped to build a society based on partnership. Those who don’t will be impacted by the consciousness that this is a normal, viable choice not just for a school but for society, and integrated programming between homogenous schools should bring groups together regularly to create contact and familiarity.Golda Meir was right that it is the parents who shape their children’s views of enemies and allies, and this has a direct impact on the kind of future we will have as a society. The existential crises of 2017 are not those of 1948. Today’s Israeli reality requires building partnerships between Jews and Arabs. Integrated schools and coexistence programs must be scaled up to become a norm rather than the exception. Our future depends on it.The author is director of resource development and strategy for Hand in Hand: Center for Jewish-Arab Education in Israel.