The General Assembly must discuss the West Bank

Months ago, T’ruah, the organization I run, approached JFNA staff to offer a day trip to the West Bank, to take place right before or after the GA. The answer was no. 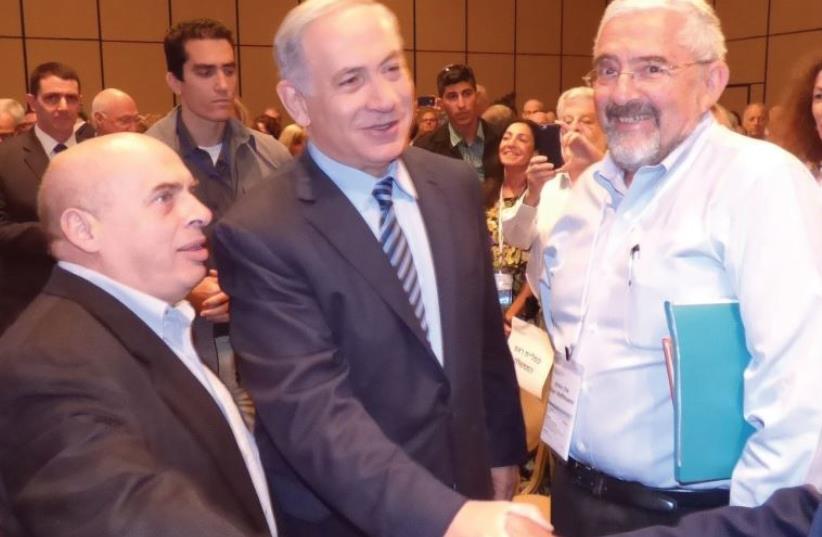 Jewish Agency Chairman Natan Sharansky, Prime Minister Benjamin Netanyahu and Jewish Agency Director-General Alan Hoffman attend the Jewish Agency Assembly in Tel Aviv.
(photo credit: Courtesy)
Advertisement
The leaders of the Jewish Federations of North America (JFNA) say they believe that “We Need to Talk” about the growing divide between the Israeli government and the North American Jewish community. That’s the theme of this week’s General Assembly in Tel AvivBut JFNA apparently thinks that we don’t need to talk about the occupation, even though that is the major existential issue facing Israel and the primary cause of the conflict between North American Jews and the Netanyahu government.Months ago, T’ruah, the organization I run, approached JFNA staff to offer a day trip to the West Bank, to take place right before or after the GA. The answer was no. Then we offered to become sponsors of the conference. That meant paying a certain sum of money and, in turn, being permitted to include a piece of material in the conference bag. JFNA spent more than a month vacillating on whether T’ruah would be permitted to become a sponsor of the conference, including at one point telling us that there was no more space – even while telling other Jewish organizations the opposite. We were surprised by this resistance to participation by a group representing more than 2,000 rabbis and cantors committed to a Jewish democratic Israel.Finally, JFNA allowed us to sponsor – until they learned that our contribution to the bag would be a booklet that both affirms “We believe Jews’ ancient historical and spiritual connection to the land of Israel, including the West Bank, is not up for debate” and introduces basic legal terms and concepts relating to occupation. JFNA staff expressed worry about upsetting people who had flown across the ocean to attend. Information about the occupation needed to be presented by a rabbi or educator, they said, and not handed out in a booklet. Of course, we would have been happy to have organized a tour of the West Bank led by rabbis and human rights leaders.In taking hundreds of rabbis, rabbinical students, and synagogue members to the West Bank and East Jerusalem, we have heard significant confusion about issues such as the differences among Areas A, B, and C; the varying legal statuses of the West Bank, East Jerusalem, and Gaza; and the legal systems in play in the West Bank. We produced this new resource booklet, “A Very Brief Introduction to the Occupation,” in partnership with the Israeli human rights group Breaking the Silence in response to the clear need for a basic guide to the legal and human situation in the West Bank, East Jerusalem, and Gaza.I believe that American Jewish leaders are smart and sophisticated enough to handle hard truths about the occupation. Apparently, JFNA leadership does not.Much of the published agenda of the GA focuses on discourse. But talking about talking is another way to avoid talking about the actual issues at hand – namely, the 51-year-old occupation, and the Israeli government’s ongoing attacks on democracy. The sessions that come closest to touching on the key issues feature co-existence groups, which forge closer relationships between Jewish and Palestinian citizens of Israel (the latter group often known as “Israeli Arabs”), and sometimes between Israelis and non-citizen Palestinians. These projects are crucial means of eliminating hatred and mistrust, and set the stage for long-term peace and for a healthy civil society inside of Israel. But such focus on people-to-people engagement often serves as a smokescreen for ignoring the laws and policies that maintain and expand occupation. A Palestinian whose land has been seized to make space for a settlement, or an Israeli soldier sent to guard an extremist outpost will not be saved by dialogue.Will the more than 2000 GA attendees stop off to visit Khan Al-Ahmar, the Bedouin village whose demolition Netanyahu just postponed? The government’s cynical claim that houses in this village were built illegally (as Palestinians in Area C can virtually never acquire building permits) ignores the fact that this same government has been retroactively legalizing settlement homes built on private Palestinian land. For months, Israeli and foreign activists have staged vigils and slept at Khan Al-Ahmar to try to head off the demolition. A visit to this village would offer a glimpse of the impact of laws that displace Palestinians in order to make room for settlements and to advance a de facto annexation of the West Bank.Will GA attendees visit with Israeli human rights leaders to hear about government attacks on their activities, including incitement from the highest levels of government? This week, the Knesset is debating a bill that would impose up to seven years imprisonment on Israelis who support boycotts, and possibly on any Israeli human rights leader who speaks abroad. This bill directly threatens Israel’s status as “the only democracy in the Middle East,” in its attack on free speech and on human rights organizations. Also this week, Oren Hazan, a Knesset member from Likud, posted on Facebook a picture of the executive director of B’tselem, one of Israel’s premier human rights organizations, with the words “Wanted, Dead or Alive.” Netanyahu, who recently called B’tselem “a disgrace” in front of a Christian group, has yet to respond. These attacks come just months after the Knesset passed a bill aimed at silencing human rights organizations by limiting their right to speak in schools.The JFNA wants to know why many North American Jews – especially younger Jews – are walking away from Israel. They’re right that we need to talk about that. But talking about talking isn’t enough. We need to talk about the occupation, about the Netanyahu government’s attacks on democracy, and about how North American Jews can partner with Israelis to bring about the change that Israel needs.The writer is the executive director of T’ruah: The Rabbinic Call for Human Rights, which mobilizes a network of 2,000 rabbis and cantors to protect human rights in North America, Israel, and the occupied Palestinian territories.