The grave danger of media bias

Misinformation matters because media outlets have great power. They shape the way we understand the world and, ultimately, drive our behavior. 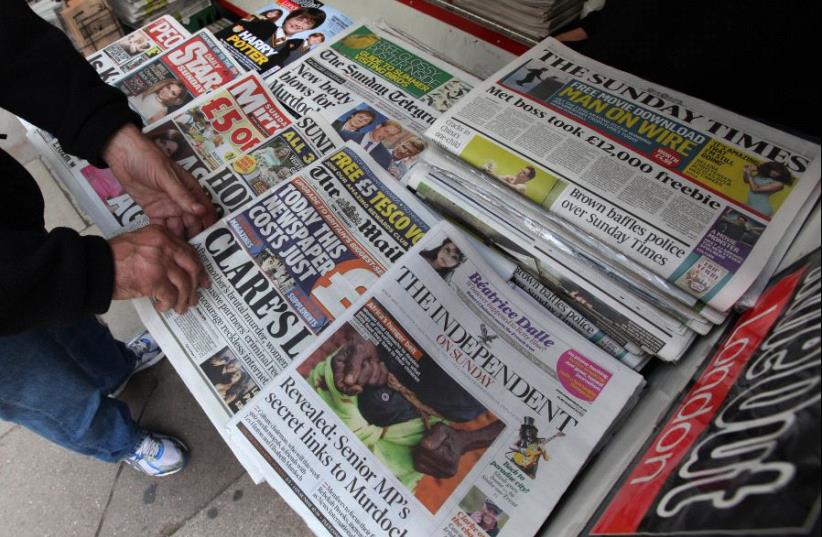 A man buys a Sunday newspaper at a news stand in London July 17, 2011.
(photo credit: REUTERS/SUZANNE PLUNKETT)
Advertisement
This past May, the Los Angeles Times ran the headline “A Baby Girl Dies in the Haze of Gaza,” which told a story about eight-month-old Palestinian Layla Ghandour, who was allegedly killed by inhaling tear gas used by Israeli defense forces. This story was tragic and upsetting. It was also untrue. The New York Times and other major outlets published similar stories, framing Israel and Israeli soldiers as child-killing villains, amplifying Hamas’s false narrative about Layla’s death.Following this wave of coverage, Layla’s cousin admitted that Hamas paid his relatives to lie to the media about Layla’s cause of death. In reality, Layla died from a preexisting blood condition. Of course, the family of a deceased baby deserves any rational person’s sympathy, but when the media falls prey to Hamas propaganda that uses the death of an innocent baby to degrade Israel, no one, except for Hamas, wins. Even today, this story continues to be available for a wide audience to read and reference, without any disclaimer that it is based on falsified information. Then, amid this summer’s Great March of Return protests, each one a violent attempts to cross into Israel’s borders and kill civilians, the LA Times reported on June 18 that “about 130 protesters have been killed by Israeli troops.” In fact, the group of “protesters” consisted of a significant number of armed and active Hamas combatants. The Times ignored this fact and the intent of this march, as prior to this coverage, a senior Hamas official had admitted that most of the Gazans who died in the protests were Hamas members, terrorist operatives with the intention of killing innocent Israeli men, women and children. This misinformation matters because media outlets have great power. They shape the way we understand the world and, ultimately, drive our behavior. It is no exaggeration to say that their activity can have life-and-death implications. The pattern in coverage of the New York Times and LA Times is a case study that drives home a critical point for society.In the 1930s and 1940s, the New York Times, Washington Post and other media outlets neglected their obligation to disseminate truth and remained virtually silent as Nazi Germany carried out the mass murder of Jews in Europe, relegating stories about Jewish genocide to short briefs on their back pages. While Jews starved in ghettos and concentration camps, watched their family members perish and were stripped of their humanity, they wondered where the world was. The press remained largely indifferent and the reluctance of editors of major outlets to report widely and consistently on these horrors contributed to consequences that the world will never forget. Newspapers and radio news broadcasts failed to fulfill their part in educating the American public about the horrific crimes committed by the Germans. The New York Times and Washington Post, despite being Jewish-owned publications, included minimal coverage on the Holocaust. In essence, the media diminished the disturbing revelations about the extermination of Jews under Hitler’s Third Reich. If the extent of Hitler’s unspeakable crimes were exposed and understood earlier, more lives could have been saved. Surely more Americans would have been spurred into action if they had repeatedly read front-page coverage on the detestable conditions that Jews were forced to suffer.The role of journalists is to shine a light where there is darkness, to tell the stories of the powerless and hold the powerful to account. Decades later, in 1964, the media showed the world the power of fulfilling its duty to report the truth. When LIFE magazine shattered all misconceptions about smoking cigarettes, it demonstrated the life-saving potential of the media. Despite all the parties who had a stake in the triumph of cigarettes – farmers, politicians, advertisers, and the tobacco industry – LIFE conclusively revealed the deadly effects of cigarettes, featuring the US Surgeon General’s report announcing that cigarettes are a major cause of lung cancer and chronic bronchitis.   Imagine if this leadership in exposing the truth could be the model for how Israel is covered in the media. The LIFE story shows us that this reality is not out of reach. By reporting on confirmed facts and confronting their internal biases about the use of cigarettes, LIFE journalists saved and are saving millions of lives. They helped end the era of smoke-filled restaurants and classrooms, carefree smoking and glorifying cigarettes. For the first time in history, white and orange wrapping became synonymous with cancer and death. The media outlets have that power, but they must be willing to fight for it. We must hold the media accountable for honest reporting. We must reject and condemn stories that spread inaccurate information and newspapers that fail to broadcast corrections as dramatically as they broadcast untruths. If journalists fail to understand that antisemitism is a deeply embedded bigotry that persistently impacts their understanding of the world – and a hatred that is central to Hamas’ political actions – they cannot accurately report on actions at the Gaza-Israel border. A story pinning the death of an innocent Palestinian baby on Israeli soldiers should raise a red flag. Journalists must present facts and a careful understanding of the nuances that shade coverage of complex situations. A headline taken out of context should not be tolerated. Media bias and misreporting are more than just a nuisance. They blur our vision for a better world. When we cannot see clearly, we risk our values, our democracy and ultimately, our humanity. The writer is an Israeli-American philanthropist and co-founder of the Adam and Gila Milstein Family Foundation. He is co-founder and national chairman of the Israeli-American Council.