Why globalization may not be enough to explain the success of Trump, Le Pen

Sometimes, discontent with social reality has real justifications; sometimes it is just a rationalization or projection of a psychological disposition. 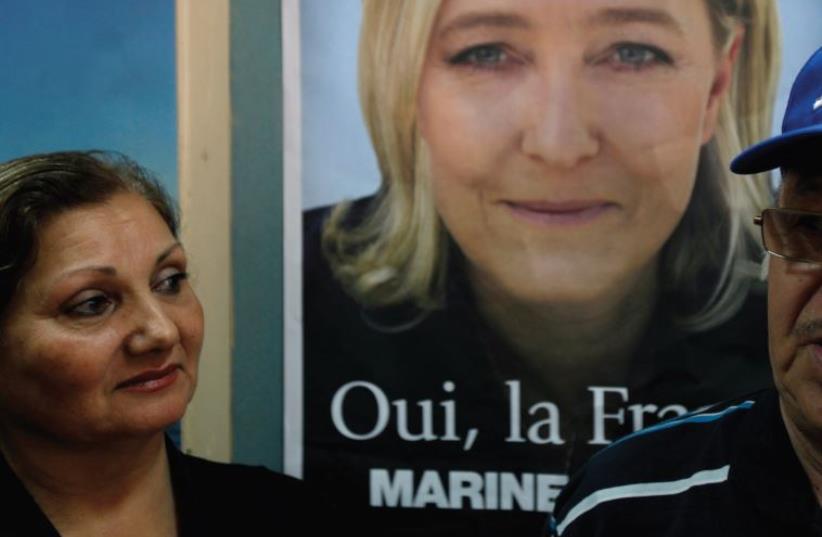 French nationals residing in Israel stand in front of a campaign poster of National Front presidential candidate Marine Le Pen, as they wait to vote in the French presidential election, at a polling station in Ashdod, April 22, 2012.
(photo credit: REUTERS)
Advertisement
In the 20th century, it was the so-called dark sides of modernity that were blamed for the popular support of fascist leaders and ideologies. In the 21st century, the success of the new populist Right and leaders such as Marine Le Penn and Donald Trump is attributed to so called fears of globalization.And yet, these explanations may reflect too narrow a focus.The kind of discontent with reality that stirs support for populism, fascism and their simplistic pseudo-solutions to social problems has always existed everywhere. In one way or another people everywhere and always are unhappy with social reality. In the early modern era people struggled with the effects of industrialization; throughout late modernity, people tried to come to terms with individualization; and in contemporary “post-modernity,” it is globalization that questions the foundations of people’s sense of existence.Sometimes, discontent with social reality has real justifications; sometimes it is just a rationalization or projection of a psychological disposition.Many of those who support so-called protest parties are well of, live in stable conditions and are not subjected to extraordinary threats.Whatever the particular reasons of or justifications for discontent may be: in a world that isn’t perfect and never will be, unhappiness always has been and always will be part of the human existence.And a desire for change, together with the tendency to buy into simplified promises of salvation, seems to be an eternal and universal response to this, independent of time, place and particular cultural context.Miserable Jews wait for the Messiah, while unhappy Christians and Muslims wait for their salvation after death.Exploited workers anticipated their redemption in a revolutionized post-bourgeois world, antisemites in a world that would be stripped of poisonous Jewish domination and American workers who fear that their cultural identity is being usurped – together with their jobs – by Mexicans voted for Trump.Trump succeeded in making people believe that his rough, egocentric vulgarity would be an expression of strength and that this imaginary strength would solve all problems.His promise to “make America great again” is the kind of unspecific prospect that, like the predictions of a fortune- teller, can be interpreted by everybody as hope for a resolution of his or her particular problems.But what Trump in America, the AfD in Germany, the Front National in France, UKIP in Britain and the Freedom Party in the Netherlands all share is not only the propagation of simplistic pseudo-solutions but the fact that they represent a style of politics that is diametrically opposed to the style of moderation, tolerance and consideration that has characterized Western politics since the end of World War II and that stands in stark contrast to the competitive power politics and cultural coercion of previous eras.Roughly a year ago, David M. Axelrod, the chief campaigner of President Barrack Obama’s presidential campaign wrote in The New York Times: “Voters rarely seek the replica of what they have. They almost always seek the remedy, the candidate who has the personal qualities the public finds lacking in the departing executive.” Crudely speaking, Axelrod says that people have an inclination to simply vote for what they perceive to be the diametrical opposite of the incumbent leader. Since people are always unhappy and since they blame the current government or political establishment – justly or unjustly – for their misery, they are always going to opt for what they perceive as its antithesis.Trump appears as the antithesis of Obama, just as Obama appeared as the antithesis of George W. Bush. Trump, together with his colleagues Le Penn, Nigel Farage, Geert Wilders and all the other leaders identified with the so-called new populist Right in the Western world represent a rebellion against the overarching style and tone of Post-World War II Western politics, whether this is expressed as a rejection of “political correctness,” of the European Union or of patterns of military cooperation established by NATO.This rebellious new populist political Right may continue to enlist public support until it will be seen to have itself become part of a new establishment. It will then be responsible for what people will then consider their major problems. In other words: It may be a matter of time until the same dynamics that today bring about the rise of the new populist Right will contribute to its demise.The author, a German-Israeli social scientist and journalist, holds an MA in sociology and is a PhD candidate at Hebrew University.