''If FIFA wishes to truly promote “human rights” it should start by ending its own racist, discriminatory approach and instead kick terrorism out of football.'' 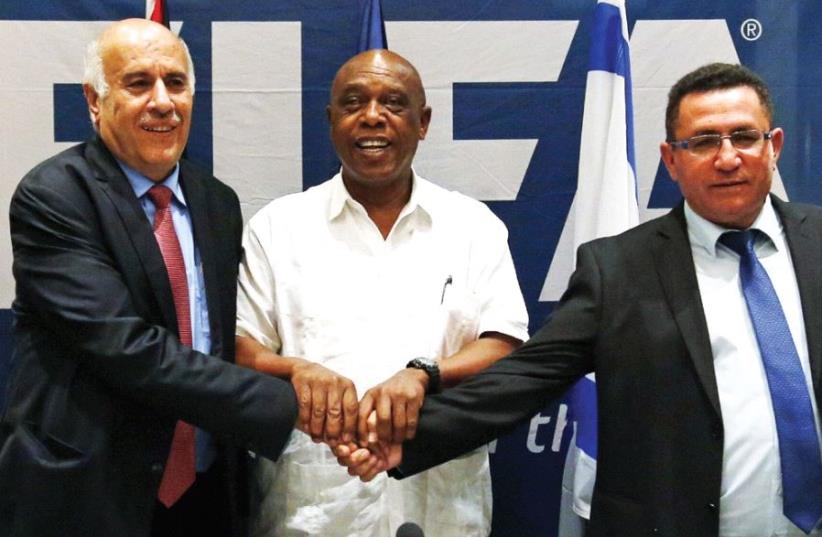 Jibril Rajoub (left), president of the Palestinian Football Association, Tokyo Sexwale (center), chairman of the FIFA Monitoring Committee Israel-Palestine and Israel Football Association president Ofer Eini shake hands following a news conference in Jericho in December 2015.
(photo credit: REUTERS)
Advertisement
On October 27, the FIFA Council is set to meet in Kolkata, India.Alongside the other issues, it is worth paying special attention to the agenda items titled “Monitoring Committee Israel-Palestine” and “First Report of the Human Rights Advisory Board.”The first item will discuss FIFA’s insistence on entertaining the baseless, and purely political, demand of the Palestinian Football Association (PFA) to sanction the Israeli Football Association (IFA) for allegedly breaching FIFA’s statutes.The claim is that the IFA is in breach of FIFA’s statutes since six of its registered clubs play in Judea and Samaria, in what the PFA refers to as “its territory.”The claim is both factually and legally baseless. From a factual point of view, according to FIFA’s own website, the IFA inherited the status of the Palestine Football Federation (PFF) that was accepted to FIFA in 1929. The PFF was set up by the famous Jewish sportsman Josef Yekutieli and comprised mainly Jewish clubs that played against the British. When accepted into FIFA, the Zionist movement’s PFF was granted exclusive rights to organize football in all of mandate Palestine, including Judea and Samaria.The control of the area of Judea and Samaria was only temporarily stripped from the IFA, in 1948, when five Arab states invaded the nascent Jewish state.The illegal occupation of the area by the Hashemite kingdom of Jordan finally ended in 1967 when Israel, and the IFA, regained control of the area.In 1998, on the back of the Oslo Peace Accords, FIFA decided to accept the PFA as a member association. According to FIFA’s statutes, applicable at the time, the PFA could only have been granted control over the area that it effectively controlled and could point to the appropriate infrastructure in. Accordingly, at that time, the Palestinian Authority and the PFA could only point, at best, to control and infrastructure in what the Oslo Accords deemed areas A and B.From a legal point of view, decisions of the Court of Arbitration for Sports have repeatedly stated that in sports “the word ‘country’ ... is not to be understood within its common political meaning” and that “the concept of ‘nation’ or ‘country’ in the sports environment must not necessarily be ‘understood within its common political meaning.’” This being the case, since the Israeli clubs that the PFA is attacking all play in what the Oslo Accords deem area C – the area which is under exclusive Israeli control – and since the Palestinian territories are not defined, in sports, based on political borders but rather effective control, it is clear that the PFA’s claims have no validity whatsoever.Furthermore, while there are numerous other international territorial disputes, FIFA is only applying its narrow interpretation of its statutes to Israel and the IFA.All considered, it is quite clear that the PFA’s claim is nothing other than a transparent attempt to politicize football and it is a disgrace that FIFA is playing along.The second agenda item will discuss the “First Report of the Human Rights Advisory Board.”“Human rights” will be put on a pedestal by FIFA – that is, unless you are a Jew trying to enjoy the basic human right to life.In March this year, Palestinian Media Watch (PMW) submitted a detailed complaint to FIFA’s Disciplinary Committee.The complaint documented evidence that the PFA, its member clubs and its president, convicted terrorist Jibril Rajoub, incite violence and terrorism against Jews, glorify murderers of Jews, are openly racist against Jews and also ban the use of football to create a bridge for peace between Israelis and Palestinians. If found justified, the PFA and Rajoub would be fined and face possible suspension, or even expulsion, from FIFA.All these actions fundamentally breach the very same FIFA statutes that the PFA, and FIFA, are seeking to use against the IFA.Six months have passed. FIFA has done nothing.Only after PMW wrote a follow-up bulletin in which it proved that when dealing with other cases of incitement and racism, perceived and real, FIFA acted quickly, did FIFA bother to respond.However, FIFA’s response, which was bureaucratic, technical and meaningless, left no room for doubt – if a you are football supporter who throws an inflatable banana onto the pitch, in a “perceived act of racism,” FIFA will come down on the club like a ton of bricks.But if you are Jibril Rajoub and the PFA, and you call to murder Jews; call murderers of Jews “heroes” and “crowns on the head” of all Palestinians; glorify murderers of Jews by naming competitions after them; and openly call Jews “Satans” and “Zionist sons of bitches,” then you are immune.If FIFA wishes to truly promote “human rights” it should start by ending its own racist, discriminatory approach and instead kick terrorism out of football.The author is head of Palestinian Media Watch’s legal department. He served for 19 years in the IDF Military Advocate General Corps. In his last position he served as director of the military prosecution in Judea and Samaria. He wrote PMW’s complaint to FIFA’s Disciplinary Committee and was part of a team that made submissions to FIFA’s Israel-Palestine Monitoring Committee in defense of the IFA.