This Normal Life: When God offers you a raft, take it

Next time we’re offered a raft on the Jordan River, we’ll take it! 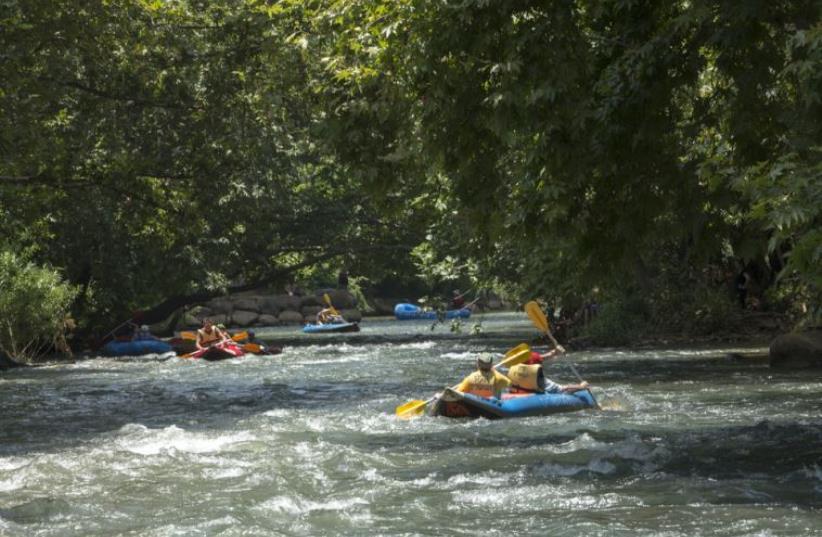 Nature-lovers go rafting on the Jordan River
(photo credit: TOURISM MINISTRY)
My wife Jody and I recently spent a relaxing weekend at a small vacation bungalow in Poriya, a moshav overlooking Lake Kinneret, with our friends David and Shelley.On Friday afternoon we had a few hours to kill before we needed to get ready for Shabbat and we wanted to go on a hike.The Israel National Trail runs along a hill above one of the tributaries of the Jordan River, starting at the “Rob Roy” canoe rental facility. It’s a lovely route with lots of shade, perfect on an unseasonably hot day. It sounded like a serene way to get out into nature.It turned out to be anything but.The weekend in question was during fall holiday season when everyone – and it really seemed like everyone – in the country packs up anything at home that’s not locked down to go camping, transforming peace into plenty… of noise.Every few meters along the riverbank was another encampment, each more extravagant than the previous one: from simple barbecues with a few sleeping bags to full-on villages with table settings for dozens, kegs and coolers, and living accommodations that looked like an inside-out version of Hermione’s beaded bag from the Harry Potter books.And then there were the sound systems – speakers as big as those you see in a club, pounding out a soundtrack of epic outdoor proportions.The recently released army youth groups favored trance; the pounding bass created little ripples of recognition in the water below. There were several Mizrahi music campsites and one playing Russian disco pop.A large group of English speakers – maybe a post-Birthright gathering? – was blasting the Eagles and the Allman Brothers.Talk about an ingathering of the exiles.We walked for about half an hour along the Israel Trail until there was a land crossing where the Jordan went underneath us briefly.We reversed course, now on the other side of the river, pleased that we wouldn’t have to double back on the same route and that we’d get a slightly different perspective on the musical merrymaking.But when we got back to our starting point at the Rob Roy, we were confronted with what, in retrospect, should have been an entirely expected dilemma: we were separated from our car by the Jordan River and there was no bridge in sight.Now, the river is not very wide and it wasn’t particularly deep either – you can cross it while still keeping your hair dry. But Jody and I were wearing our leather hiking boots and we all had our iPhones, wallets, and watches with us, none of which were waterproof. The canoes were already tied up for the night.At that moment, a woman with a floating air mattress came by.“Do you need a ride?” she asked.We considered the makeshift raft, but we still had our boots and our electronics to worry about, and it was easy to imagine the raft flipping over midstream.That didn’t stop Shelley, who jumped on and gently sailed to the other side.David skipped the raft entirely, sloshing through the water in equal time.“Um, we’re going to see if we can walk to the road to the other side of the kibbutz,” I told our friends. “When we get there, it should only take a few minutes for you to drive and pick us up.”We set off through a lovely green field until we got to a very high metal mesh fence which served to protect Kibbutz Deganya Alef not only from wandering animals but any riffraff thinking of expanding their camping radius.We walked around the fence for a bit, until it was clear it was impenetrable.The sun was starting to set.“We don’t have any choice,” Jody said ruefully. “We’re going to have to cross that river.”We returned to where we started, but this time the raft was no longer available.Our moment had passed.And then, charging back through the water came David.“Give me your bags,” he commanded.“I’ll carry them over my head with your shoes and phones in them.”The water wasn’t that cold. It took us two minutes at most to cross. The sharp pebbles that dug into our feet were the worst of it.As we dried off our feet at the Rob Roy, a cover band was playing rock ’n’ roll classics. There were hundreds of people grooving in the late afternoon breeze.I recognized the lead singer: Reuven Schmaltz, one of the original members of Red Meadow, which regularly plays at the nearby Jacob’s Ladder music festival.As we drove back to our bungalow, I was reminded of the classic joke about a pious man who is caught in a flood. As he flounders in the water, a ship comes for him.“No, no,” he tells his would be rescuers.“I trust that God will send a miracle to save me.”A bit later, a helicopter arrives and drops a rope for him to climb to safety.“No, no,” he says again, “God will provide.”Eventually the man drowns.When he arrives in Heaven, he has an audience with God.“Why didn’t you save me?” he demands of the Almighty.“I sent you a ship and I sent you a helicopter!” God responds.The clear lesson: the next time we’re offered a raft on the Jordan River, we’ll take it! The author is a freelance writer who specializes in technology, startups and the entrepreneurs behind them. More at www.bluminteractivemedia.com.